QE : Infinity and Beyond

It seems we are relentlessly writing about QE this year but then when something is so socio-economically pivotal, utterly massive AND the overriding financial force (the irresistible force to the immovable object of public sector de-levaraging); I hope the obsession can be forgiven. Uncle Ben has nicely bastardised the old adage “Another Day Another 283,000,000 dollars” keeping those printing presses cranking and introducing an employment target of 6.5% as long as inflation is anchored. So as Andrew G puts it, we get QE infinity until either there is growth or there is inflation or both! Here is Andrew’s take :-

We regard the Fed announcement as a further step towards synchronized QE. The Fed has now effectively doubled their monthly asset purchase rate, the ECB balance sheet is set to expand further once the OMT is activated and the BoJ is likely to become more aggressive if the LDP wins this weekend’s election, as seems likely. We continue to believe that the only practical way to stabilize government debt to GDP ratios and unemployment in the developed world is to drive the real interest rate down to minus 1½% to 2%. We think negative real rates will remain in place for at least a decade – and maybe a generation.

What are the investment implications?

6) Commodities are moved by growth (and thus indirectly by QE). We are tactically neutral mining. We think the gold price will rise to $1,900/oz. 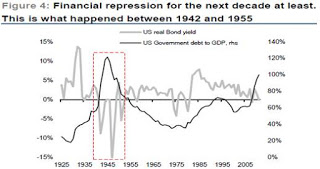 The trade we currently have on for next year is Gold Call ladders. I think Call ladders are the perfect strategy where you have a really deep liquid asset as it requires a big capital allocation and extreme squeezes (up) are therefore rare. Gold is a good candidate (so is Apple, if you think the move is overdone here! ) and one thing that has been interesting about Gold is that it really does split opinion – is it a useless metal that offers a negative yield? Or an alternative form of “money” or “retained purchasing power” to quote Harley Bassman (Credit Suisse US Rates Trading).

Harley has some truly excellent ideas for playing inflation on a longer term basis (we have taken the liberty of attaching the “Stocking Stuffers” piece – really something special). I particularly like the S&P Risk Reversal idea and the considered approach to USDJPY (we have been short JPY versus dollars for the last 3 years – riding the waves with every macro fund in the world J ).

We like the 172/175/178 GLD Call Ladder in Jan, but the nice thing is they are very low cost (if not free) and can be rolled quarter to quarter.

OMT and The Gauntlet
So Ben (the man who through various pegs controls 50%+ of global FX) has got his Gloves off! One has left a rosy red hue on Mario’s cheek and the other is at the door of the BoJ. The expectation is for the LDP to win the election and then they will be shooting for a 2/3% inflation rate. With or without the incumbent BoJ board! Keeping it simple we have the USDJPY 87.5/90 call spread in Mar. Cost 30bps to make 3%…Seems fair

For Mario to restart expanding the ECB balance sheet he needs Rajoy to play ball. Now Rodrigo is the Spanish political expert here and I’m sure he would explain to Rajoy that he needs to ask for help while he has some room for manoeuvre – like the trading bible tell us. If he waits to be dictated to by the market (like the politicians’ bible tells him) then he will find his bargaining power much diminished and with Spanish bond redemptions at EUR14.3bn in Jan and EUR233bn in 2013 (Look at France at EUR348bn – a topic for next week?).

It would pay for Rajoy to move early before his hand is forced. Witness the contagion effect as Spanish yields moved on Monti’s announcement of his resignation. An event which has actually brought forward the election and so although it has catalysed uncertainty it has accelerated a resolution – which our strategists think will be centrist (with or without Monti).

One serious risk for markets in Q1 is that Q4 12 GDP will come in negative for most of Europe this coupled with worsening Spanish Fiscal Deficits could cause a mini-crisis for Spanish yields BUT that is probably what Mario wants. Europe can’t afford an appreciating Euro (as AG will not cease to reiterate) and the OMT needs to be activated – the market will once again have to force the politicians’ hand.