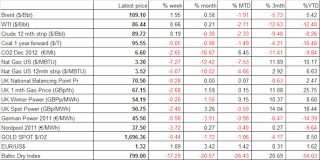 Crude oil prices recovered this week (Brent +2.0%, WTI +0.7%), although Brent still remained within its recent $108-111/bbl range. The main driver was a positive revision of demand estimates for 2013 by the IEA. The 0.1 mbpd hike in demand estimates came from the recent improvement in Chinese estimates. Still, the IEA expects ‘sluggish’ demand expansions through 2013 given slowing global GDP growth rates. Notably, the IEA’s 2013 call on OPEC crude was maintained at 29.9 mbpd while the exporting group’s production levels for November were pegged at 31.22 mbpd. Moreover, non-OPEC supply is expected to grow 0.89 mbpd to 54.2 mbpd in 2013 on surging output from US tight oils. Separately, the DOE inventories data was bearish, but was largely ignored by the market. We saw a surprise build in crude stocks as well as a larger than expected build in gasoline and distillate stocks. Refinery utilisation continues to climb while higher imports also contributed to the bearish figures. Lastly, the OPEC meeting this week was largely a non-event, as the organisation agreed to keep the current production targets unchanged, as expected.

Coal had an uneventful week, while fundamentals still point to a negative environment. On the demand side, while there is still some (limited) buying from India and China, this is concentrated on the lower calorific value coal  from  Indonesia.  This marginal demand from China is also expected to reduce in the near term as the country  enters a traditionally quiet period before the Lunar New Year with high stocks. Demand in  Europe is still very weak as oversupply to the region remains an issue.

UK natural gas prices lost 2.7% this week, despite demand levels hitting fresh highs of the 2012/13 winter season (-7% from 2012 highs). Supply has been strong enough to meet the increased demand. As has been the  case over the last few weeks, the system has coped with high residential demand despite LNG send out being down y/y and has done so through a combination of increased Norwegian flows, more imports through the Interconnector and a call from gas in storage. With temperatures expected to rise over the coming days, this also helped ease pressure on the prompt and the curve as expected calls on gas in storage are unlikely to increase.

US natural gas prices lost a further 5.1% with the front-end reaching $3.3/mcf. Consistent with our earlier view, the magnitude of nuclear outages remains the main swing factor that can offer upside to prices. Otherwise, the market is pricing in the warmer winter forecasted in the near term. Moreover, this week’s unseasonable injection of 2bcf (-3bcf was expected) further weighed down on prices. This was largely due to a recovery in nuclear power (+c.5GW w/w) with the y/y shortfall falling to c.8GW from the peak of 13GW.

CO2 lost 2.7% this week, still leaving it within the €6.5-7/t range. We are now nearing the end of weekly sales of early Phase 3 EUAs and upside from here remains in the hands of EU lawmakers. This week saw the meeting of the EU’s climate change committee (CCC) and as expected it did not involve a vote on the proposal to back-end auction volumes. The EC had already managed those expectations, so the lack of much news from this meeting left the market generally unmoved.

German power prices were down 1.0% while dark spreads up 2.2%, largely explained by the weakness in CO2. Nord pool also lost 3.7%, giving up on the recent gains on the weakness in CO2. However, expectations of colder temperatures in January should help support prices in the near term.

Baltic Dry Index collapsed 17.3% this week as year-end lull in activity weighed down on all of the segments. Capesize was the worst affected, -23%, as Chinese buyers are largely out of market. While some rebound in activity can be seen in January, the index is not expected to pick-up until after the Chinese Lunar Year in February.