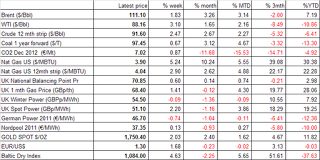 It was another strong week for crude, with Brent reaching the highs of $111/bbl despite the short-term weakness on the announcement of cease-fire in Gaza. Looking at supply/demand environment, while we have seen some improvement on the supply side, short-term tightness on the physical market continues to be supportive. Thus, Statoil’s Troll C platform was brought on-stream (120kbpd capacity) while Shell lifted the force majeure on its Nigerian Bonny Light exports (have been off for more than a month). However, in the North Sea 2 more December Forties cargoes were delayed, making it a total of 4 deferrals for the month and adding to 8 delays from Ekofisk cargoes. Moreover, Shell force majeure on Focados is still in place while negotiations between South and North Sudan are taking longer-than-expected. On the demand side, China remains the bright spot in otherwise uninspiring environment. Latest customs data showed October crude imports were up 18% y/y.

Thermal coal continued to grind higher, +0.7% this week, even though fundamental picture is not much different. Despite the recent gains in prices, they are still close to marginal costs and the upside to prices is capped by the high inventories in China. Thus, Chinese imports are expected to pick-up only after the Lunar Year in February.

NBP (UK gas) had a strong week, with 1-month forward price up 1.4%. Prices remained strong on the back of colder temperatures expected into the week-end and next week. Supply/demand balance has remained tight, as volatility in supplies continued to put pressure on inventories.

US natural gas prices (Henry Hub) gained 2.9% with the front-end rising to the highs of $3.9/mcf. Similar to NBP, weather remains the key driver, further helped by continuing nuclear disruptions (temperatures last week were 23% colder than last year and 9% colder than the 10-year average). This week’s DOE figure was bullish once again, showing a 38bcf withdrawal vs. -28bcf expected.

After the massive sell-off of last week, CO2 bounced a little to €7/t level (+0.9% on the week). There is further selling pressure as part of the ongoing EU auction of volumes under Phase 3 (a total of 21mn tons worth of permits sold this week). Given the lack of news expected in the coming days, prices are likely to stabilise at around €7/t level.

German power prices were down 0.7% with dark spreads losing 0.6% (holding the €12-12.5/MWh level). Nord pool, on the other hand, gained 0.1%, helped by the rebound in CO2 as well as expectations of lower temperatures in the coming days.

Baltic Dry Index (BDI) had a strong week, +4.6%. The gains were largely driven by the Panamax segment as increased Indian purchases (as we discussed last week) are keeping the volumes busy. Capesize was largely flat due to fewer booking on the Brazil-China route.