Thanksgiving week, a good time for all of us to thank God for being part of that small percentage in the world of privileged people who have a house , a job and hot food on the table everyday (unless you prefer salads…).

So please allow me to start this week by thanking you all for reading and helping me to improve this note every week, as well as thanking my team for contributing to the different sections and writing “Back Row” while I am away, but especially let me thank my wife (Happy Birthday Nayke!) and child for being back in London
Little Rod has not stop crying since we landed, and although it is not absolutely clear on his dialect I think he is asking me : Why Daddy, Why? But I guess we all have asked ourselves the same the first time we landed on “Sunny” England…. he is British he will get used to it J
As we mentioned in Wednesday’s flow note, Markets seem to be absorbing bad news quite well – we have had a French downgrade, some soft US data (although partially blamed on Sandy), very poor Japanese data (although now a clear expectation for more easing) and finally the failed Euro meeting overnight – but markets have been on fire across the Globe this week…that 2580 gap on Eurostoxx looks nearer by the day.
So in a very short but intense week, what is on the menu?
Japan. The new kid on the block
Last week I mentioned that this time might be the good one , finally the other part of my pension ( remember most of it is on the IBEX) might get in the money, after 10 years.….everything seems to be in place for the Japanese market to wake up from a very long sleepy period or as Andrew Scott put on his note today “Japanese monetary policy is much like Japanese cuisine… both have gone from exotic rarities to perfectly normal… as sushi and quantitative easing spread around the world’ (James Mackintosh – FT yesterday morning). This should be the trigger.
Technically both the JPYUSD and the Nikkei seem to have broken strong resistance and they have not much on their way to stop them a rally of 10% + ahead of year end should not surprise anyone. Tighten your belts as this market might be ready to fly.
Over the past six weeks, there has been extensive coverage of the ~8% rally in the TOPIX as other major equity indices have consolidated.
As already mentioned the biggest driver behind this rally has been the depreciation of the yen against the US dollar (and the Korean won) and clearly there are several forces behind the currency’s depreciation: call for general elections on 16 Dec where Shinzo Abe, who would support a looser monetary policy and a pro-inflation platform, is expected to win; increased M&A activity by Japanese firms of international players (e.g. Softbank acq. Sprint Nextel, Marubeni acq. Gavilon Group, Dentsu acq. Aegis, Canon acq. OCE); and the expected recovery of the US economy.
The yen depreciation is expected to persist and has directed investors towards Japanese exporters even though the economy remains structurally stagnant, suffers from massive national debt, and has experienced more than a decade of deflation.
For all these reasons I did ask my friend Leonardo Grimaldi to run some screens in Japan for me.
Please see some of the results : 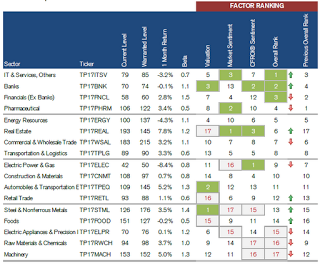 Using the HOLT database, we found that IT, Consumer Discretionary, Industrials, and Health Care are the sectors with the highest percentage of international sales. The HOLT sector ranking model (pictured below), which combines Valuation, Market Sentiment, and CFROI sentiment, also prefers IT and Health Care (and Banks). Valuation has started to work again in Japan after a three-month hiatus and the country’s market-derived discount rate declined 32 bps since May. So while there are many broken businesses in Japan, there is momentum in the inexpensive, high-export space now.

What Factors are working . Capital Gains , Positioning and lack of liquidity

So once I show the results I immediately started to wonder if value would have started working again. We are all aware that this have been a strange year , where positioning has distorted most of the trades so I am clearly waiting for value to start performing as the sign that Long only money is really putting money to work and that an equities allocation is starting to happen.

This time I went to Siebert and Panos, also in HOLT ( I tell you these guys are clever!, what a platform!), and unfortunately for me the results were not exactly what I was expecting

On a cumulative basis, Valuation remains the weakest performing factor in Europe over the last 12 months.

On a month by month basis: Valuation did not work in Europe in Nov (yet) Got hurt in the first half of the month, and recovered almost completed in the last week.

But you know me , I am quite stubborn and I do not accept defeat easily so I turn to Marina and Andrew’s team, I had the feeling some indicators were turning constructive for this markets, and this is what I found:

Now we are talking …

I felt that I was on the right path so I turn to my other ally Mr Ben C.and I had a chat with him that he perfectly summarized on a note yesterday, these were the highlights:

But obviously not everything can smell of roses in this life, so I went to look for the Yen and there he came my friend Emmanuel with his Most important chart in the world (Yes I know I am using pieces from everyone , but we clearly seem to be at an important inflexion point

(See above) « Most Important chart in the world ». These are Russel Napier’s words. He’s a well-regarded consultant within CLSA Asia-Pacific Markets and I would like to share with you this very interesting graph, not particularly bullish for China nor the US (Graph on the right). For the first time since 1998, the rhythm of China’s FX reserves has turned negative. Slowdown of China’s reserves accumulation has begun in 2003 but has been even more obvious since 2011. Probably a consequence of Global slowdown. Last time China’s reserve growth rate went below 10% was in 1998, it was just before the burst of Tech bubble. More worryingly (for the US), Chinese holdings of US treasuries declined by $123bn (they still hold $1.156tn…). Graph on the left (HOLDCH Index). Moreover, it seems that this shift has been beneficiary to European debt issuances (France and Germany on top). One interesting figure: 40% of French issuances YTD has emanated from Asian investors vs. 5% a couple of years ago. It’s now interesting to link this with US economy financing. Chinese authorities have used these reserves to buy US treasuries, which then turned to be a significant boost to economic growth in the US and in the rest of the world. Napier says about that economic growth cornerstone : “it’s now over”. To finish on a happier note though, while Chinese authorities was decreasing their US Treasuries holdings by $123bn, Brazil, Belgium, Luxembourg, Russia, Switzerland, Taiwan and HK boosted their holdings by a collective $265bn since August 2011… Scary…..

Let me also open one more thing for discussion that I will definitely analyse deeper next week, considering this year it has all been about positioning and an increase on Capital Gain Tax next year is almost certain , do you think is clever to hold to your winners??? I think there might be clear tactical reasons for recent sell off in Apple or for the underperformance of the performers and the squeeze on the dogs….

Catalonia or the road to nowhere
This week I am certain that you would have read even more articles about this topic than about Japan, however as it is a problem near to my heart (I still support FC Barcelona even if my head wants to support Atletico) I decided to add my 2 cents to it.

The truth is that the situation is extremely dangerous and it could create unwanted noise for an already fragile European Union. However as I have mentioned before I do think that Mas has absolutely no intention of forcing or even obtaining the Independence, as he knows as well as I do , that it would not be viable for Catalonia. His technique is nothing else than a smoke and mirrors exercise, he has managed to take attention out of a disastrous policy that while was focused on austerity measures made the financial situation in Catalonia even worse and it is the mechanism to try to force Madrid into a negotiation on Fiscal autonomy.

As Christel Aranda expressed in a fantastic note this week:

“ Fiscal austerity is at the root of the call for early elections and also at the root of the more secessionist fervour. Mas’ goal is a fiscal pact for Catalonia rather than independence in our view. He has long sought to re-negotiate intra-regional transfers and for Catalonia to have more tax autonomy, along the lines of Navarre and the Basque country. It is interesting that Mas has expressed frustration that the central government in Madrid is not offering to negotiate.”

That last sentence is key, as Catalan’s say “ La pela es la pela” (One penny is one penny…every little helps) and as long as Rajoy bends to their fiscal /money demands they will forget about any unilateral declaration of independence , however Rajoy knows that Catalonia is fully dependent on Madrid financing its debts so he is in no hurry to make concessions.

A very dangerous game , that my friend Daniel Lacalle analysed on his latest article

In the credit market two separate countries do not have the same access to credit as they had united. It never happened. Catalonia would exist; let’s not say it’s impossible. But annual available credit would quickly fall as we saw in every other occasion. In such an environment, with doubts about every single aspect from the credit perspective I fail to see how investors would react positively to secession, either with its own new currency (massively depreciated) or within the Euro. Uncertainty and lack of clarity, as we all know, are enemies of business and job creation.

Few investor sit waiting to see if the impact of independence on GDP is 5% or 15%. There is no business sense in secession, for Catalonia or Madrid. It is extremely negative for both.

~Let me finish with some facts, from Daniel’s article, for those who think Catalonia is the richest region in Spain and clearly can survive on its own:

So far in 2012 Catalonia has received from the State €11 billion more than its share, apart from the funds needed for its financing, according to official figures.

In Summary I guess there are multiple arguments I could give both ways but I do think the Catalans will come to their senses and will not give absolutely majority to Mas but hopefully even if they do , he will not be stupid enough to try to break the country. IF he does use these levels of low vol and loaded into puts as it could be the final bullet on the EU project.