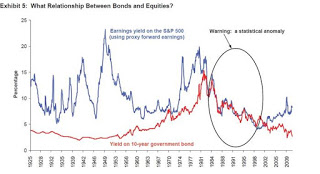 I am flying to Spain today in order to bring my family back and stop my “London Madrid “ weekly commute, I honestly have to say that I need them back!!!…I miss my wife and the little beast but more importantly this morning I could not find my car keys and I had to take a cab to work …I need to be back to a normal family life, without excesses, even boring if you want sometimes, but consistent and productive.
Why am I saying this? Mainly because I think this is what this market needs, an environment without excesses on the upside or downside , a world at which macro figures show small but consistent steps, and logic does not became an strange animal .
People need to go back to trade on fundamentals or beliefs not on fear or anxiety. Recent apathy is killing this market and most of its participants in the meantime.
The Next Catalyst
Long gone are those days in August at which we built a binomial model to try to forecast the different market reactions to the multiple events that were about to hit us in September. Let’s remember: Jackson Hole, ECB decision on Interest Rate, German Constitutional Approval, Dutch elections, QE3 and Spanish bailout.
Well , clearly looking at the chart below we missed one thing … the Spanish bail out was the key event, was not it? You would think so , as market is completely flat and do not forget that on the mean time we had the US elections and another episodes of the “Greek Tragedy”! …. No wonder why vol is trading at the levels it is , the environment feels crazy dangerous but in reality there is nothing else than a constant chase of performance by most of the market participants. 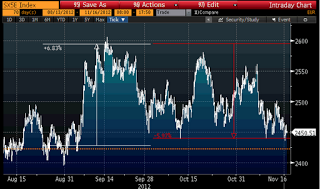 So the expected rotation from bonds to equities has not happened yet and I will try to explain why on the next topic about the equity risk premium , but on the meantime :

Let’s go back to our old format of analysing what is about to happen and where is the next catalyst( with my personal view on each off them):

After all we have lived this year you have to agree with me that there are no reasons for this market to move on the back of the event above , is it???

Clearly the market is in a dynamic that on no news it will deteriorate however the Elephant in the room , the only comparable catalyst is …..the Fiscal Cliff!!!!, and I honestly do not think that there would be such a cliff, if US politicians have any sense they will agree sooner than later and so will Spain to the bailout.

Those two factors together invite me to still be bullish till year end, as I think that is where the blood will be .

Complacency and optimism 3 weeks ago in the market was clearly excessive but now it is the opposite, people have clearly reduced their books and it is now when a market rally will properly damage everyone’s performance.

That is why my money is on the upside…any positive coming from the “Cliff “ negotiations and we will close the year near the 1450…see you there!

On Ullicks’ words : You have to recognise that every ” outfront maneuver ” is going to be lonely. But if you feel entirely comfortable then you are not far enough to do any good.

Equity Risk Premium ? Is this an absolute indicator?
During this year one of the arguments that most of the bullish strategist , and the simple traders like me have defended for investing in equities was the equity risk premium being too high

Luckily for me , three years ago I discovered this guy, that had outperformed even on his nursery days and I made him an offer to join us, Tej not only has photographic memory but he knows how to use it. A touch too fond of himself but a guy worthy to listen…

Today he came with an explanation he had read and investigated further on the Fed model/ equity risk premium model. According to Tej, this model biggest problem is that it is based on the assumption that risk is constant and we all know that it obviously is not.

i.e. it is stupid or at least not efficient to look at Earnings yields vs. bond yields but to the difference between the vol of both. It is only when such vol becomes the same when the Equity Risk premium model should work.

In the graph at the top of this article it is clear the Bens’ target is for the light blue line to go as close to zero as possible then we will be back to a period similar to the one from mid 80s till beginning of 2000.

While the graph we found calls this period a statistical anomaly, I do think that period is the one that better defines the relation between bonds and equities as it is the moment at which markets turned electronic and therefore efficient.

How could you expect an immediate reaction between equities and fixed income on the 60s when sales people flew around the world writing orders on their notepad that would trade on their return to the US? (or so my friend Clarke Pitts told me once)

So once again , this takes me to the point that I think we are nearer to the new equity rally or a proper treasury sell off than ever as funds will have to come back to equities.

Now it is all about Japan…
Those of you who know me well , know that I fell in love with Japan a long time ago while I lived there and since then I have followed everything related to that country with extreme interest , on that topic the trade I have been calling for the last three years is long USDJPY , and more importantly for the last 5 : long Japanese Equities….They say that good things happened to those who wait, so would this time be the one. ? In a piece published by 13D research I read:

Watch Japan—it may lead the world in the biggest asset allocation shift in history—out of bonds into equities. During the third quarter, the Japanese economy contracted at its fastest pace since last year’s earthquake and tsunami—an annualized decline of 3.5%—which puts the country at risk of its fifth economic recession in just the last 15 years. Moreover, in September, Japan reported its first seasonally-adjusted monthly current account deficit since 1981. Japan, once the largest net capital exporter of the world, is now on the verge of becoming a net capital importer.

The global markets—particularly for foreign exchange, JGBs and U.S. Treasuries—are most likely unprepared for Japan to become a consistent net importer of capital. There are signs indicating that the political impasse in Japan may be coming to an end, as Prime Minister Noda may soon dissolve the Lower House of the Diet, which would kick off the beginning of the next general election. If that happens, we expect to see the dovish LDP leader, Shinzo Abe, take the reins from Noda earlier than expected, which would exert more pressure on the central bank to ease policy further to weaken the yen even before the BOJ governor Shirakawa finishes his term next April. Although the depreciation of yen would help lift share prices of Japanese exporters, this could also pose potentially large risks to exporters from other countries, particularly those of SouthKorea.

Guess what happened this week….Elections were called

Further exacerbating the current economic woes, Japanese households are holding the most cash since 2005, according to BOJ data. The record high cash levels have certainly offset some of the BOJ’s quantitative easing efforts to date, risking a protracted deflationary cycle if the BOJ fails to convince markets that it is serious about meeting its 1% inflation rate target. Consumers will be encouraged to postpone consumption to the future if they believe deflation will continue.

Equities are the best hedge for inflation

Richard Howard of Hayman Advisors recently made the following comments on JGBs: “It all came down to this idea that there was an internal self-funding mechanism in Japan, that essentially the Japanese economy and interest-rate environment could exist separate to the rest of the world…It wasn’t going to last forever, and in fact it is rapidly approaching a turning point .”

Japanese companies have been repatriating capital for a long time, but that cannot last for ever and they know what is about to happen otherwise why is M&A of Japanese companies buying Foreign ones doubled on size this year.

2 thoughts on “Front Row: The Next Catalyst”