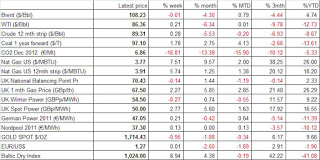 Despite all the intra-week drama, Brent ended the week flat. While at the Oil & Money conference this week there was a general agreement that supply is abundant, a view that we reiterated by both IEA and OPEC’s estimates of further North American oil production, short-term supply developments helped support Brent. Despite December loadings of Forties earlier being predicted to be the highest since June, this may no longer be the case as there are now reports of at least one cargo being delayed by at least a couple of days. Moreover, Statoil has temporarily shut down its Troll C platform due to corrosion. This closure will deprive the markets of 120kb/d while an investigation is carried out, and there is no estimate as to when it will reopen. Elsewhere, escalating tensions in the Middle East also helped Brent prices.Coal markets have slowly but steadily added to last week’s recovery. The demand picture remains uninspiring among the main importers. Chinese port and utility stocks remain at elevated levels and that is tempering prompt import demand. Although the winter destocking season is expected to help, the rate at which these inventories are drawn is expected to be the key factor in determining when they return to the prompt market. If these utilities continue to rely on inventories until the Lunar Year festivities in February, then import demand at the prompt is expected to pick up late Q1. Elsewhere in the region, there is a contrast, in that Indian power plant stocks are down significantly to the lowest level of the last few years. The depreciating rupee continues to pose a limitation, as the country relies on less expensive Indonesian sub-bituminous cargoes for now, but eventually some support can be seen for international prices given that these plants are carrying 4-5x less stock than is officially recommended.

UK natural gas prices were strong, with 1-month forward price gaining 2.3%. Prices remain supported by colder temperatures expected in the next 10 days, with demand expected to gain c.15-20% over the weekend. Volatility in supply, particularly from the North Sea, is also helping the prices.

US natural gas prices have risen drastically a few days before the storage report on Thursday as the market anticipated the first withdrawal following the injection season. The storage change indeed turned out to be a withdrawal, which was 18 Bcf, 4 Bcf lower than the expected 22 Bcf. The withdrawal was entirely concentrated in the East, where incremental heating demand and power demand from nuclear outages offset the demand destruction caused by Hurricane Sandy.

It was a wild week for the carbon market. On Monday, prices jumped almost €1/t as the EC brought its announcement on planned intervention in the market forward by two days. The announced proposal was that it would remove volumes of 900mt from the cap in the 2013 to 2015 period and would only return it in 2019 and 2020. The proposed number however fell short of the 1.2bn that was rumoured earlier. The following two days the market then fell on profit taking, the start of EC auctions through the centralised platform and confirmation by the EC that 1Q13 volumes would not reflect the back ending.

German power prices gained 0.2% this week while dark spreads gained 9.4% in the same period. The sharp sell-off in CO2 helped dark spreads recover from the lowest level since September 2010. Nord pool was flat this week, due to expectations of high precipitation in the Nordic region in the coming days.

BDI gained 8.9%, reversing its losses of the last week as both Capesize and Panamax rates recovered. For Capesize, the main driver was pick-up in activity on Brazil-China route, while the pick-up in Panamax is largely attributed to booking to India.