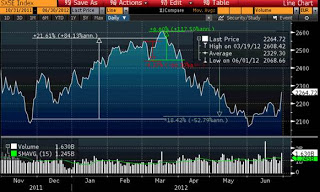 Milan beat Barcelona on Wednesday… aside of that being a tragedy….I am sure Silvio narrowed the gap on the back of it and on top of that the Fed starts thinking about reducing QE ….BOE gives a mixed message and the banks return less than expected to the ECB on the LTRO. Finally, BOJ thinks they might have moved too far too fast…definitely very bullish signals?…NOT! 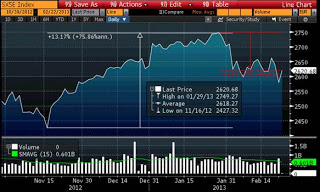 Why is the market up today? My answer is just a mini short squeeze for everyone who got ready for a risk off Friday ahead of what could be a very dangerous weekend.

I am still bullish medium term but evidence is pointing me to a different place at least on the very short term, the flows we saw from Monday were far too light and focused on buying of defensive names with high yield and selling of Beta and Financials that could not forecast anything good.

The technical picture is not ideal either and a comparison of 2012 and 2013 looks scary…. You only need a messy election and there you are the full picture….you need to own Gamma…as a good result will trigger some of the money on the sides to come in …this market is back to buy on the blue and sell on the red…

On today’s menu:
Are we there yet?
You have seen this flow chart below but it is scary to see how politicians and policy makers do not seem to get the overall picture , and they might do it again! 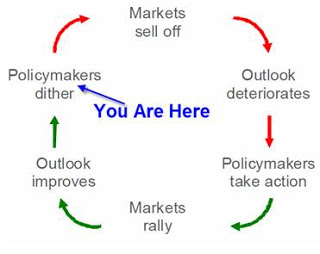 Been there done that …..this message does not seem to apply to these people. We need negative real yield to stay for a while in order to generate real growth. Until everyone understands that we have no hope!!!

Think about it and try to find in your memory how you felt at the beginning of 2012… equities volumes were good (identical to 2013) market had had a strong recovery and it looked ready for a proper rotation out of Fixed income into equities and out of S&P into Europe and even the banks were at technical levels for a big break out… then the Greek elections woke us all up!It was a done deal…until it was not.This year certain fundamentals have changed and there is light at the end of the tunnel, but you cannot go up in a straight line, and while I think Europe consolidation has been healthy and it is starting to be at levels to buy, the tail risk of Italian elections is too big and the S&P might wake up from Coocoland one day and realise that sequestration is a possibility, that the currency war could be worse than they are discounting and that macro momentum seems to be deteriorating. Nothing wrong on a healthy consolidation.

One more thing to consider from recent years is that the end of February has been miserable.

However, it looks like so far this risk is only been reflected on the FX market through the EURUSD , European equities have zero personality and will do as US will but if the US gets the flu we will be dead…

As my friend Sacha pointed out it is not only Italy, do not forget France and even Holland as they could be fun…and what could I say about my beloved country , here you are… an anecdote.

This morning on the way in, my wife had a podcast related to the “State of the Nation” parliament activity the previous day. As I was listening to it, I could not stop laughing. I honestly thought that it was a parody… something made up by professional comedians….my wife corrected me , it was the real thing! … that defines the intellectual capabilities of Spanish politicians… scary. One guy was accusing the government of generating inflation. For this his sentenced started : “ you have increased the price of electricity , sweets, oil prices….” Impressive to hear that the second most important thing was SWEETS.

Well, he was part of the Anti-everything group , similar to the one our friend GRILLO represents in Italy, do not get me wrong Berlusconi might not win , but the recent move ahead on the unofficial polls by M5S could put us in a situation at which there is no government in one of the G7s countries, or there is one weak enough to do nothing… that could be fun…..

In the mean time, check the overall level of vol. But more importantly check the realised vol the last month… (for those who say vol is not realising they are in for a surprise) once again stay long if you want but please buy VOL!!!!!

However you need to select the select the right one ! While the absolute level is lower on the S&P than on Eurostoxx, when you compare the spread between the ATM Vols and the spread between the realised ones you will notice it is cheaper to buy Europe as S&P does not realise enough to pay for the gamma, however if all you are doing is buying yourself some tail risk protection then S&P might work better as it is cheaper on absolute terms.

Breaking down the Data

Several of you were surprised by the Data analysis of volumes I wrote about in this note a couple of weeks ago so I thought I will continue providing some factual data from a document by our AES quants.
What are the main conclusions from this document?
So what worked??? Value! Surprised? You should not be as I have told you 7 times in 7 weeks.

So on my note last week I asked if it was Italy what could go wrong this time, ..my dear friend Sacha mentioned France and while I had already highlighted the risks I always thought their high saving ratio was their way out.

However while I was thinking about it, I got the “Observations from France” email from my friend Emmanuel and funny enough he was already one step ahead of me , and he had decided to go for such a topic.
Honestly I thought it would be more credible if a French person tells you to sell France, than if a Spanish one does, as we all know the love-hate relationship between our countries (let me clarify that it would not be applicable to me as J’aime la France, sa culture et son histoire!!)

So what did Emmanuel had to say….

While the effectiveness of excessive austerity measures has been very questionable in Greece (3rd consecutive year of austerity, 27% unemployment, 6.5% GDP contraction in 2012), it has also been the case for the rest of Europe (weak growth perspectives, unemployment towards historical high level). Governments face the need to lower their deficits but seem all the more resilient to pursue their task, eroded from the hard adjustment efforts. While analyzing the debate of how to proceed with those adjustments, I tried to raise a point: Short France! The idea for me is to show that we need austerity but in a way that put more emphasis on spending cuts than on tax increases. It’s a matter of finding the right balance between spending cuts and tax increase.

· A Keynesian approach ? Not so sure: Its strongest supporter is the 2008 Nobel Prize winner Paul Krugman. Even though this economic policy has been applied in Europe / US between 2008 and 2009, it has failed to structurally sustain growth rates. Krugman considers that large deficits in 2009 were on the right track, but were just too small. Not sure Europe can afford to run larger deficits again and have a Euro crisis #2…

· Short France ! One can therefore wonder whether the French government’s budget for 2013 goes the right way: €30bn of savings (compare it to the public spending figure below..) but with twice as much coming from tax increases (€20bn) than from spending cuts (€10bn). If one believes that France is the Euro’s biggest concern, then the “Short France” makes sense (even if it’s not patriotic !).