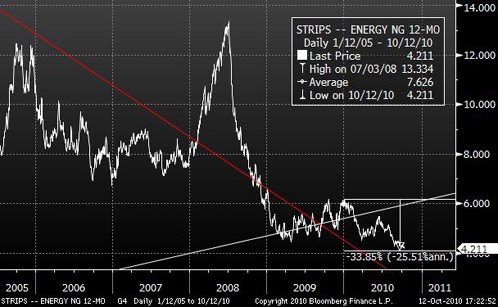 I find it very interesting to see how in a globalized world, few have stopped to discuss the devastating impact that cheap gas has on the growth of wind and solar facilities, particularly in the U.S., and in turn the chilling effect posed by renewables on gas demand. However, companies on both sides, gas producers and renewable developers, are betting (praying, I would say) on electricity prices rising one day to generate acceptable returns again, even though the two sectors create a deflationary effect on prices. And without acceptable power and gas prices, investments are ruined. This is a war to see who loses more money, sooner and faster. In the European Union we are used to accept energy decisions that are not economically justifiable, as the decommissioning of nuclear power stations or coal subsidies, but in the U.S. this is not so easy.

The revolution of shale gas and a much more efficient and economical extraction process, hydraulic fracking, has led to reach 250 years of proven reserves and see the unit cost of production fall by 33%. Thus all producers, from Shell to Petrohawk, continue to increase production despite falling prices. Now that revolution is coming to Europe, as we mentioned here (May).

Of course, there are differences in the different gas prices in the world. NBP, the English natural gas, for example, is trading at nearly $7/MMBTU equivalent as the Norwegians are closing the tap at the Langeled pipeline at a rate of nearly 30 million cubic meters per day to avoid overcapacity. Being an island also helps.

But the general trend in all markets is clear: Very low likelihood of increased natural gas prices as the market continues to have a surplus capacity of 13-15BCM (billion cubic meters) annually, which is estimated to continue until 2014. And the producers of liquefied gas from Qatar to Yemen, will not cut production at these prices because most investments were made (FID, final investment decision) with an estimated gas price of $1.5/MMBTU.

However, the effect of cheap gas is essential to understand the drop in wind power installations.

The issue is as follows:

a) The price of electricity is set in a marginal system, like the U.S.one, by the price of gas (mainly) or coal.

b) The price of gas depends mainly on electricity demand to go up or down.

c) New technologies, wind and solar, when they exceed a critical mass, generate deflation in electricity prices because they add new baseload capacity at a low price (ex-subsidies).

d) However, to see further growth in renewable installations with adequate returns, wind and solar power plants need to see a higher price of electricity, which they themselves contribute to cap. Currently wind farms cannot sign long term PPAs, power price agreements, due to very low prices. This is the deflationary impact of renewables. And if electricity prices do not rise to reasonable levels, they will still require subsidies to survive, creating a vicious circle. Does the right hand eat the left?

e) So if they are eroding demand for natural gas and coal to generate electricity, they cannot expect prices to rise unless the taxpayer pays for a minimum return.

In short, renewables are needed and gas as well, but as from a certain critical mass and percentage of the energy matrix onwards, both engulf the same hand that feeds their returns.

Given this scenario, deflation, the only way to improve returns is to remove capacity (“coal? it is virtually defunct) or create more demand for electricity that, due to increased efficiency, is not easy.

Or promoting the electric vehicle, but when oil demand falls, oh surprise, the price of gasoline falls as well and remains much more competitive than the electricity including subsidies and aids. Unless we use the xenophobic argument that we do not like the country that sells us the commodity. That’s another story

To close the circle, the fact that the price of this invented and surreal “commodity” created by bureaucrats in the EU called CO2 is at rock-bottom prices (at €15.6/mt, oh surprise, also due to falling demand for gas and coal) does not help, and as it doesn’t add significantly to the costs of thermal power, it breaks the deck. Numbers don’t add up.

Trying to force the displacement of baseload commodities and technologies forces a downward revision of price, thereby wiping out the marginal technologies. That’s why they are commodities, because marginal cost adapts to demand.

Returning to the U.S., as the price of electricity is well below the price required to make a wind or solar power plant financially viable, the U.S. administration gives no more subsidies. Why? Not for political reasons, as many say, but for reasons of price, cost and demand. States are unwilling to accept price unreasonable rate cases when gas is abundant and very cheap.

Large power companies are beginning to seriously worry about the low returns on their investments, given their high gearing levels. And they witness the negative effect of over-capacity in the profitability of their businesses. Who would have thought that the enemy to beat, fossil fuels, was in turn essential to maintain a minimum return for their investments. Meanwhile, gas producers, with very low debt, accept the market price, as they always have, and produce more in a traditional suicide strategy to stifle the opposite sector. Now they would all have to find a way to agree to ensure that overcapacity does not continue to increase.

The day, a few years ago, when the energy sector decide to bet on “ever-growing demand” and forgot that “control and management of supply” is paramount, was also the day when we started to see the growing “running to stand still” strategies that have caused so much damage to the sector. Because governments do not care whether companies shoot each in the foot as long as the energy bill goes down. But this downward spiral will not end until we see corporate bankrupcies. And we might see them sooner rather than later.