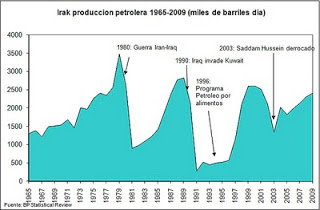 We’ve talked on other occasions of the difficulties that big oil companies find to grow. The reserve replacement ratio is still disappointing.

Iraq is presently outside the normal OPEC system, which is based on reserves, and given it currently produces around 2.5mbd they have stated they will not discuss a quota until output reaches 4mbd (in line with Iran). So the increase in estimated reserves can be viewed cynically as a way of preparing itself ahead of an OPEC quota.

Currently the geopolitical environment has improved substantially. Service firms are established, but the risks are not negligible, with nearby local elections, conflicts with the Kurdish minority and the gradual withdrawal of U.S. troops. For example, it remains unclear if the city of Kirkuk, home to a giant oil field, belongs to the Arabs or the Kurds, which prevents investment there.

The local government has advanced rapidly, licensing 11 fields in the last year. After a false start in which the license auction was declared void (except the Rumaila field, BP-CNPC) because the conditions imposed by the government were too onerous, between the second half of 2009 and 2010 the government has auctioned licenses to operate up to 60 billion barrels in estimated reserves, with a national strategy to increase production from 2.5 million barrels per day today to a very ambitious target of 12 million. From BP, Shell, Statoil and ENI, to Russia’s Lukoil, China’s CNPC or Exxon, most big oil companies have participated in the process.

Iraq’s 11 deals with foreign companies should in theory help increase capacity to 12mbd by 2017. From my point of view, the goal of exceeding Saudi Arabia’s production is very ambitious. No one has managed to multiply by 5, as intended, the production of a country in 10 years. And Iraqi production hasn’t exceeded 3 million barrels/day since 1979. I think it’s much more logical to assume that production will rise to 3.5 million barrels per day in 2015, in line with the history of typical production recovery in this region (including Iran).

Of the reserve revision seen this week, the bulk of the increase comes from the West Qurna field, now thought to hold 43bn bbl compared to 21.5bn previously. Exxon signed the PSC for West Qurna development Phase 1, Lukoil for Phase 2. The next largest source of uplift is Zubair (up from 4.1bn to 7.8bn bbl), where ENI is leading the development consortium. On the flipside, Rumalia (BP-CNPC) was revised downwards slightly from 17.8 to 17.0bn bbl, and Majnoon (Shell) from 12.6bn to 12.0bn bbl.

And the problem now is the costs, estimated at $19/barrel (F&D), plus an additional fee of nearly $2/barrel. The contracts allow the oil companies to cover costs up to a minimum production level. Until there is a contract typical of the industry,within what is called a PSC(production sharing contract). And IRRs can vary significantly, but in most cases only surpass 16% if ramp-up is in a straight line.

But if minimum production targets are not met, oil companies will suffer from profits lower than the average cost of capital, or even losses. The Zubair field, won by ENI and their partners, for example, will likely generate an internal rate of return of less than 20% below $55/barrel, while requiring investments in excess of $20 billion over 20 years. In total, the capex will exceed $100bn, and a lot needs to happen in terms of services (still small relative local presence), infrastructure and administration (there is no real government to manage the process and give the approvals).

We see most of the rates of return for the companies involved in the Big Six Iraqi oil fields fall within the 10%-18% IRR range, with higher returns for the pre-existing PSCs and government-owned entities. The key Kurdistan operators get very high IRRs under the Kurdish PSC, which has much more favorable terms than the Iraqi TSC. However, the Kurdistan situation is less than clear, and Iraq still considers all these contracts illegal. It is very difficult to believe that the contracts will be validated after elections.

For Iraq, the increase in gross domestic product, infrastructure and wealth for the country that these projects, neglected or poorly managed so far, will generate, will be a giant leap for the country’s ailing economy. The investments to be carried out are astronomical, nearly $100 billion between 2009 and 2029, including infrastructure, water, schools, hospitals , almost the construction of entire cities. Consider that some of these fields require about 500 workers. And the fact that contracts are aggressive and costly conditions for oil is a minor problem, because for them it is probably the last opportunity to improve their low reserve replacement for once.

1 thought on “Iraq, A New Frontier And A Few Question Marks”