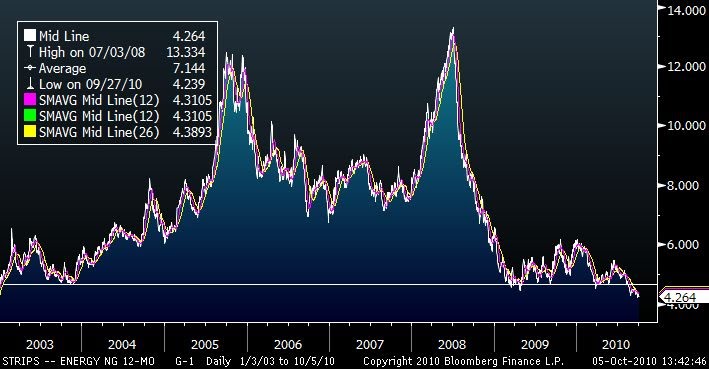 As I mentioned a few weeks ago… It could get worse, and it did. The bulls of the market have been calling for the need of a drastic cut in production in US gas and it hasn’t happened. No wonder the Hedge Funds net long positions on US gas have been reduced by 50%.

The environment is still strong for producers to keep increasing volumes, credit is abundant, hedges are in place and companies still think that growth and production is more important than supply management and economics. As an example, Chesapeake has entered into a 5 year VPP with Barclays on the Barnett 280 mmcfed of production relating to 390 BCF of 1P for $1.15 bn. This is after costs, so I imagine the price of the hedge is $4.50 (considering 20% royalty and $0.80 operating costs). Over the past three years Chesapeake has averaged $4.70 per mcf on their VPPs. This is generating utility-type returns in a very cyclical industry where everyone claims to be the low cost producer. So as long as there is credit, gas will flow regardless of diminishing returns.

Not only have we broken through 2003 lows (these are nominal prices), we are doing so in an environment where gas drilling and services day-rates remain robust, activity flush and inventories at cyclically long highs.

What has happened? Oil at $81/bbl, for starters. Wet gas changes the economics of drilling, so loads of ‘uneconomic’ gas fields are made economic by selling the liquids. Tough for dry gas-dominated producers, like in the Barnett shale.

Additionally, efficiencies in extraction, principally in horizontal drilling are forcing the cost curve lower despite the stronger environment for services. So day-rates are up, but cost per mcf produced is down.

Credit is also an important factor. Almost any producer of size can tap higher amounts of debt financing to keep drilling.

However, gas can self-correct rapidly. Once the situation becomes A few months of drastically curtailed production; or a few months of ultra-low prices like $2.50 would quickly re-equilibrate supply and demand, and force us back to long-term averages on the cost curve…but that cost curve itself is not static.

Meanwhile, the curve contango steepens. Cal 2012 is 16% above 2011. The bull case here is that by 2012 we could see conventional decline (6% pa) meet unconventional plateau, added to a view o demand improving, albeit slightly. The risk to believe this case is that the forward curve is slightly polluted by the hedges being taken in the financial markets.