It’s the end of CO2 as we know it. And we said it here months ago. It was a fake commodity and a manipulated one by the way. The EU accounts for 16% of the CO2 emissions of the world but bears 100% of the cost. By manipulating demand and supply the EU forced up prices to €30/mt, and the scheme seemed to work nicely until the rules of demand and supply deflated the artificially created price. Of course the beginning was to assume an industrial and power demand growth that was wildly optimistic, but the most important part was that the EU issued emission permits and carbon-offsetting credits as if there was no tomorrow. No wonder that expensive carbon and widespread EUA grants have killed what seemed like a nice little niche of indirect tax to the economy. Unfortunately, it didn’t work.

Prices of CO2 emissions (EUAs) have slumped 47% ytd driven by oversupply and the Europe crisis, driving debt-ridden countries to dump their excess of EUAs in the market at any price as we mentioned here (http://energyandmoney.blogspot.com/2011/06/co2-collapses-20-in-two-days.html)

A record 1.5 billion tons of EU carbon permits were traded on the ICE Futures Europe exchange between July and September even as the price slump cut the value of the transactions. Trade in UN carbon credits was a record 348 million tons in the same period. Why? Permit holders are rushing to monetize their EUAs on the fear that the system will collapse under a recessionary environment where the EU will issue even more permits for countries while industrial demand and GDP fall.

And as carbon collapses, all those projects that were sanctioned globally, from CCS to other carbon neutralizing projects, are rushing to monetize before the scheme becomes barely economical. In fact, according to our estimates c56% of those projects will be loss-making at €7/mt CO2 price.

At the bottom of this disaster of CO2 permits lies the planning of the EU, which assumed that every country would follow suit and decide unilaterally to kill their competitiveness and increase the cost of its goods and services. It didn’t happen.

UBS says the European Union’s emissions trading scheme has cost the continent’s consumers $287 billion for “almost zero impact” on cutting carbon emissions, and has warned that the EU’s carbon pricing market is on the verge of a crash next year. In a recent report, UBS said that had the €210bn ($287bn) the European ETS had cost consumers been used in a targeted approach to replace the EU’s dirtiest power plants, emissions could have been reduced by 43% “instead of almost zero impact on the back of emissions trading” (courtesy http://indefenceofliberty.org).

Now the climate summit in Durban is going to put the last nail in the coffin of CO2 and the “green EU” over-subsidized and uncompetitive scheme. In the middle of a recession it is virtually impossible to see the US, which is seeing its economy thrive out of recession partially thanks to shale oil and gas, or China, which is seeing GDP growth weaken by the quarter, take anything but moderate measures to curb emissions. But entering a crazy scheme of CO2 pricing like the EU has done? No.

The Durban conference ran overtime throughout the weekend. The two most important outcomes were agreements to:

1. Extend Kyoto Protocol for 5 years from 2013 to 2017 after its first commitment period expires at the end of next year (but without Russian, Canada, Japan);

2. Reach a legally binding deal by 2015 to cut greenhouse-gas emissions, covering all major emitters including the US, China and India. This is the first time all major emitters have agreed to negotiate legally-binding emission cuts. The deal, however, is to be implemented by 2020. And there are NO penalties involved. So if a country doesn’t comply the deficit is passed to the next period.

Details for both of these agreements still need to be fleshed out, and a working group for reaching a 2015 legally binding deal should commence in the first half of 2012. The main result is that China, US and India have agreed in principal to sign a legally binding agreement to meet emissions targets from 2020 onwards. Until then, all emissions reductions remain voluntary. And by then… we will see. The deal looks to me worth the paper it is written on.

Canada has given notice at the Climate Change talks in Durban that it intends to withdrawal from the Kyoto protocol however it will work towards reaching new emissions targets. Canada’s PM said “to hit targets (the country) would have to take every single car off the road or else shut down every hospital and factory”.  Canada may save as much as $14 billion as a result of not having to buy offset credits starting in 2015 when Kyoto becomes legally enforceable. This is the first of 191 signatories to the Kyoto Protocol to annul its emissions reduction obligation.

This week Goldman Sachs published a note on CO2, “Carbon: Political and fundamental upside risks outweigh downside”. Goldman expects a policy intervention to support prices but agrees with me that fundamentals of supply and demand are atrocious. Not easy or feasible to see aggressive policy to support CO2 prices from dying when Europe has to deal with more pressing issues. An upcoming recession, massive austerity packages, and a monstrous debt burden that needs to be sorted out.

Despite the collapse of CO2 the immediate risks are:- Risk that carbon prices remain depressed due to weak economy and selling pressure as new permits are auctioned. A balance in the supply-demand is not expected until 2017. This could put CO2 easily at €3/mt before it even rebounds, and that is if (and only if) demand for power generation recovers above 2007 levels in Europe, something I do not see happening easily. 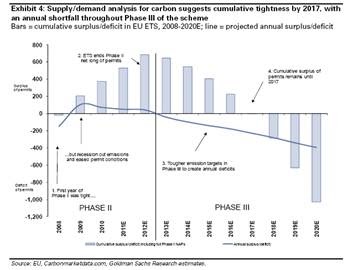 – Not even political intervention will help. Two amendments to the structure of Phase III are currently discussed:

– What if the EU simply kills the Cap and Trade scheme and introduces of a carbon price floor? . The UK floor was set at £16/tonne in 2013 (€19), more than double current market price. This would effectively bust the scheme, making the new permits worthless and accelerating the sell-off between 2012 and 2014, particularly as the redemption would not be guaranteed by any solvent entity.

These interventions could be explained by budget deficits and government need for money. Sure, only a problem. GDP and competitiveness collapses and EU loses even further in industrial demand. From 2000 to 2010 CO2 impact on GDP in the Eurozone has meant an annual loss of GDP of 0.5% net of the fiscal profit of CO2 in taxes. Even more, in Spain and countries where the cost of CO2 has been internalized by companies, it has meant a loss of competitiveness of c10% (2004-2010).

Here are the effect of carbon permits: 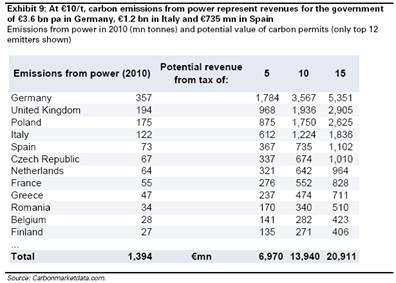 In summary, the mistake of creating a  Cap and Trade scheme instead of a straightforward carbon tax has made the EUAs collapse as oversupply first, and the likelihood of the zero value of the permits of carbon-offsetting projects second have proven that the Cap part was based on ridiculous assumptions of industrial demand. And now there is oversupply already from permits that are issued (let alone the new ones to come) until 2017. Then there is the Trade part, which created a Boom and Bust cycle that is impossible to unwind now that financial investors, companies with free permits and projects are all on fire-sale. And if the EU was going to buy the excess credits… at what price would it do it?  with what money with all countries struggling with debt? who takes the counterparty risk?. I still think we see CO2 get to €3-5/mt. The world need a new framework that is still growth friendly and allows companies to respond with more certainty and stability, carbon pricing is inefficient, ineffective and hopefully on the way out.

The Euro Council, Parliament and Commission on Energy Efficiency discussions were meant to begin on March 26th but have been pushed back to Apr 11th as countries were not ready to start talks. Chairman of the environment committee says issue of a CO2 floor will certainly not be resolved this year.