(December 2nd 2011)The December OPEC meeting in Vienna is coming and the picture of the oil market is mixed at best:

1) China PMI below 50 for the first time since Feb 2009. Global manufacturing PMIs remain weak as the table below shows, particularly in Europe.
2) Bearish US DOE weekly with high inventory build and very low implied demand. The EIA’s monthly revised oil demand numbers for September came in at 18.8m bpd, which was down from 19.05m bpd. It was also down 0.7m bpd y-o-y.
3) OPEC production in November: came in at 30.35m bpd, up 390,000 bpd from October, according to Bloomberg. The increase was led by Libya (155k bpd), Saudi Arabia (65k bpd) and Iraq (50 k bpd). 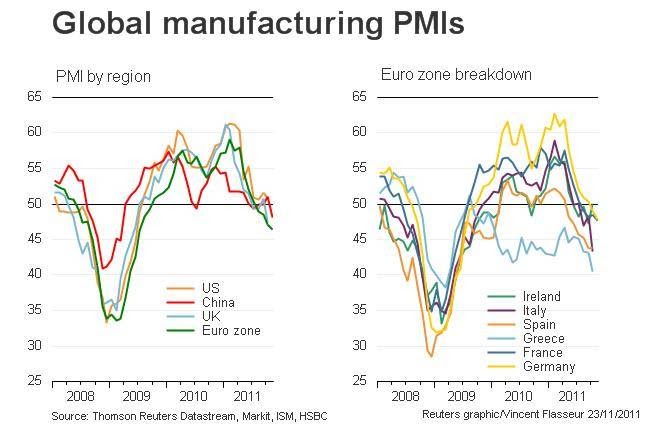 Earlier this month we had additional evidence that the slowdown in activity is seriously reaching emerging markets now. India’s industrial output declined 5.1% y/y in October, the first decline since June 2009, with a 6.0% y/y fall in manufacturing, and with capital goods output down 25.5% y/y.

In the meantime, geopolitical concerns surrounding Syria and Iran, added to the inflationary pressures of the constant reduction of interest rates in Europe and Australia more recently, have kept oil prices at a very strong level, with Brent at $109.6 at the close of this post.

To me, one of the most interesting trends is that heavy oil continues to re-rate and that Tapis (Asia) remains at a healthy premium to Brent, proving that Asian demand remains solid despite the relative weakening in the recent data.

In this environment, another interesting trend is shown by the significant increase in the break-even price required by producers to balance their budget. At $80/bbl, Saudi Arabia’s commitments to invest in social peace and support the MENA stability is starting to prove costly. But still very comfortable versus the market price. Otherwise, Russia’s $110/bbl is a reflection of the strong investment commitments of the country, which are likely to slow down in the next years, so the headline number of break-even price might be overstated in the mid-term.

Considering this, it is not hard to understand why the OPEC World Outlook Reference Case oil price assumption has been increased from last year. It is assumed that, in nominal terms, prices stay in the range of $85–95/b for this decade, compared to $75–85/b in last year’s expectation.

At the same time, global refining capacity is soaring and excess capacity is likely to reach 10mmbpd. This will have a significant impact on refining margins and, as such, high oil prices might be cushioned for the final price paid by the consumer by lower refining margins. 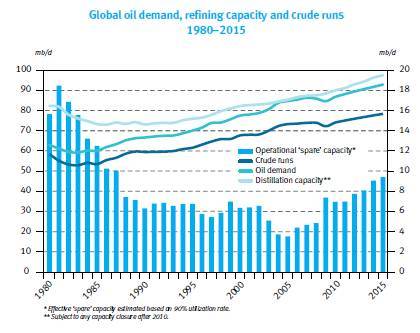 While Russian production stays afloat at 10.3mbpd and OPEC supply stands firmly above 30mmbpd (remember OPEC quotas are 24mmbpd) I continue to think that demand growth estimates are exaggerated, and not consistent with a slowdown in global GDP growth, so until I see a strengthening of the two main demand centers, China and US, I fail to see how emerging markets will offset the decline in OECD demand to reach a total of 92mmbpd demand in 2014. I think we stay pretty much flat at 88mmbpd for a few years.  Worth analyzing Chinese implied oil demand. In November it was 9.5 mm bpd, but this excludes inventory adjustments which are not published, driven by strong diesel demand which comes from regional shortages as a result of refinery maintenance and turnarounds. Crude imports were 5.52 mm bopd, +8.5% y/y but starting to show a slowdown from previous years.

In this context, even if we assume that oil demand rises to 92mmbpd, spare OPEC crude oil capacity is set to reach around 8 mb/d over the medium-term, and in the high case of demand around 4 mmbpd in 2011. Even if I assume no OPEC production growth, spare capacity at OPEC countries is unlikely to go below 3mmbpd, which according to my estimates is pretty much a super-tight market. 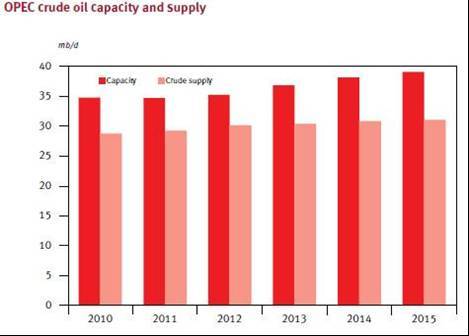 Obviously, the big question mark in this picture is how will capex be affected by any weakness in oil prices.

The table below shows the OPEC annual upstream capex required to reach the capacity additions assumed in their base case. Interestingly, this annual capex is unlikely to be affected by a global downturn in the case it happens given it’s such a small proportion of the total global capex including downstream and midstream. So prices would have to dramatically fall below the $80/bbl level to curtail the spending.

So spending is not the issue. The issue is execution and a stable framework that allows this capacity to be added on time and on budget. This is much more difficult than spending and drilling. 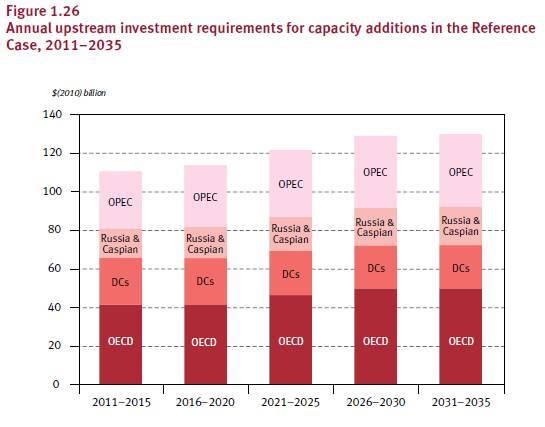 I think it is safe to assume that we will likely be negatively surprised by capacity additions in the system, probably assuming that around 75% of that capacity is actually added as expected. This, in any case, doesn’t impact the base case of OPEC spare capacity moving between 4 and 8mmbpd in the next five years.

So what is the OPEC meeting going to approve?. Very unlikely to see a production cut given the very high oil prices, even with pressure from Venezuela and acting president Iran to do so. It is more likely that OPEC alerts to a risk of oversupply mid-term, tries to enforce the current quotas, as every country is producing above quotas except Saudi Arabia, and extends the decision to cut or to take action on quotas to a meeting where they can assess the true impact of the Euro and debt crisis on global demand. OPEC could offer an increase in quotas that sets the limit at the current level, so basically making no impact to global supply, just recognizing the real volumes. The risk is that countries will continue to “cheat” on the new quotas, but geo-political concerns might prevent that from impacting prices. 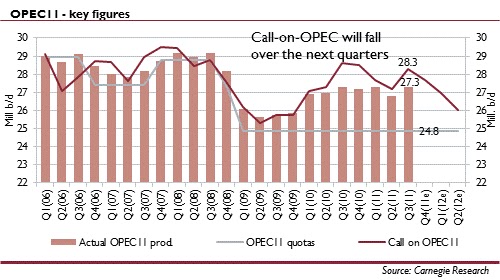 Iran’s role as president of OPEC here is critical, in the middle of the aggressive rhetoric with Israel. If Iran is perceived as anti-West in its proposals to OPEC the moderate side, led by Saudi Arabia, are likely to continue to act as buffers of the oil market. If Iran leads the meeting in a conciliatory and open way, the conclusions will likely be more firmly implemented. The last OPEC meeting gave the impression of countries “against” each other in some instances. This one could be the opportunity for a constructive approach that sends a positive message to consumers and producers alike.