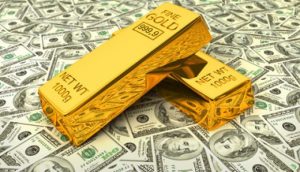 The wake up call that Trump and the rise of interest rates have meant for global asset classes should not go unnoticed. Above all, the implications on cost of debt. No one can say we had not been warned, but many states and investors preferred to think that the Federal Reserve would continue to play the monetary laughing gas game to perpetuate imbalances that have been accumulated for sixteen years.

The central bank led madness brought an accumulation of more than $ 11 trillion in negative-yield bonds, more than $ 4.3 trillion in the Eurozone. And now a small rise in inflation rates could create a potential losses exceeding a trillion dollars . Since October, the number of bonds with negative rates has fallen by more than 20%.

The vacuum effect I commented on this video yesterday  makes the strong dollar and a small rise in interest rates absord liquiodity from all over the world and into the US. Capital flight out of commodities and emerging markets into the US.

In China several companies have been forced to cancel relevant bond issues due to volatility. Shandong Iron and Steel, Hesteel Group and Wanhua Industrial cancelled their issues in an environment where investors demanded much higher rates. It is normal, if the US 10-year bond rises to a required yield of 2.5-2.6%, no one in their right mind would accept risk in countries and areas of high volatility whose differential with that US bond does not outweigh the risk.

The strength of the dollar and the slight rise in US rates has led the Chinese sovereign 10-year bond yield to 16-month highs. In two days they have suffered the biggest price drop for eight years in the five and ten year bonds, leading the Chinese regulator to halt trading in futures due to some capital outflows.

Such a rise in rates and an increase in risk would not be a huge problem – after all, they are still very low rates with 3.5% in the 10-year bond – if China had not embarked on the brutal orgy of debt.  In the past 12 months, China has accumulated more debt than the US, Japan and the Eurozone combined, and has “stabilized” its slowdown with a monstrous increase in the money supply (M2) of an 11 , 4% for a GDP growth of 6.2% with a worrisome housing bubble. Total credit granted has increased since the start of the year from 246.8% to 265% of GDP, seven months after the Chinese government announced measures to “contain” excess borrowing.

The global implications of this Chinese risk are important. Those who argue that all this cannot continue to happen, because China accumulates more than 1.2 trillion dollars of US bonds are wrong. First, because China has been reducing its US bond portfolio for years and has the lowest figure since 2013. Today, it is not China, but Japan, who holds the title of largest US foreign lender. Second, because – contrary to popular belief – the main buyer of US bonds is not China, but the Americans themselves and US investment funds. If China were to dispose of its entire US bond portfolio, the US market would absorb it in just over two weeks.

The China-US issue is important because it leads to a spiral in which the world’s old growth engine is in evident slowdown and faces the serious problem of losing a significant part of the more than $250 billion annual trade surplus with the US if they both enter a commercial war.

But how does it affect Europe? Of course, it starts by showing how unsustainably low rates were, and sending yields higher. German investors themselves have reduced their sovereign bond holdings by more than $ 2.8 billion this month, and that dominating effect should be a wake up call to countries that think that financing themselves at 1.5% is timely and guaranteed.

. It is a small relief for banks drowned by negative rates, but not a lifeline because in Europe, the problems of overcapacity and lack of productivity remain.

. The devaluation of the euro, yen, and yuan against the dollar is likely to show again that the Keynesian dogma that a weak currency leads to more exports is simply incorrect.

. Emerging markets, used to huge liquidity inflows and low rates, receiving more than 10 years of large amounts of US dollars to finance long-term local currency projects, will continue to suffer from “the sudden stop” and capital outflows.

The US dollar has become the new gold in the face of mounting evidence that the “beggar thy neighbour” policy and drowning structural problems in liquidity is coming to a close. And if, as I hope, in a few months we will see two hawks as new appointments in the Federal Reserve, capital flights to the US will be even greater. Let´s see.

There are many who think that the US economy will not accept a strong dollar. Allow me to doubt it. The US only exports 12.6% of GDP and less than 30% of the profits of the S & P 500 come from exports. Praying to the mantra of monetary expansion and devaluation will not work if the US economic policy with the new administration is aimed at strengthening the domestic market, increase disposable income for the middle and lower classes, and end the perverse incentives created by years of failed demand-side policies (read the poor legacy of the Federal Reserve )

The greatest mistake that can be made by the European Union in the face of this uncertain scenario is to try to tackle it with expansive measures. After decades of industrial plans, fiscal expansion, monetary stimulus and ultra-low rates, growth is still poor … and will not be solved by seeking further imbalances.

We could be waking up from a model based on unicorns of Keynesian multipliers to a new global paradigm where the largest and most powerful economy conducts supply-side policies. Ignoring that this option even exists shows us how hypnotized we are with the mirage of growth by decree and the nonexistent wealth by monetary expansion. But, at the very least, we should be prepared for the growing possibility that the placebo effect of monetary laughing gas is over.