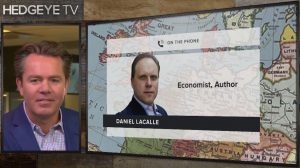 For those of you counting at home, the world’s top 50 global central banks have cut interest rates (drum roll please) almost 700 times since the collapse of Lehman Brothers.

That’s a lot of cuts. Combine that astounding figure with almost $24 trillion worth of asset purchases, and then ask yourself the following question:

What exactly did we all get from this unprecedented amount of stimulus?

Not much according to economist and author Daniel Lacalle. Here in the United States, the economy has continued to slow down, from a 3.3% year-over-year growth rate in the first quarter of 2015 to 1.6% today. This happened despite a ballooning in the Federal Reserve’s balance sheet to an historic, eye-popping $4.4 trillion.

Here’s what Lacalle had to say on this subject with Hedgeye CEO Keith McCullough in the video excerpt above:

“There’s a concept that we as investors need to think about, especially when we’re doing global macro. What we’re talking about here is return on invested capital. If you’ve spent $24 trillion fiscal/monetary stimulus, and you get 1.6% economic growth, my friend, if that isn’t an economy slowing down I don’t know what you’re talking about!”

Want more? Click here to watch the entire interview of Lacalle and McCullough, “HedgeyeTV Exclusive: Italy’s Banking Crisis & What it Means for Europe.”