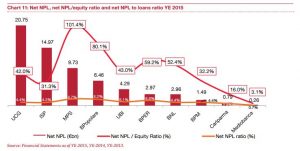 In the current market environment we must distinguish between unfounded fears and structural problems. The Italian banks´Non Performing Loan (NPL) dilemma is now structural and  has not been solved. In fact, the political crisis opened with the resignation of Renzi may have an important impact in an already fragile financial sector.

The Italian banking problem is much deeper than a matter of “perception of risk”. Non Performing Loans exceed 360 billion euro  (according to PWC) and have been growing since 2011, from 194 billion euro to the current figure. It is true that the percentage relative to total loans peaked at 18% and has fallen slightly to 17%, but it is also true that many of these loans are now simply impossible to recover.

The problem is that Italian banks are unable to do a Bail-In as the amount of shareholder equity and secured bonds outstanding is far too small to cover a gap that has taken too long to resolve. A Bail-In would consume almost all of the capitalization of some banks. Meanwhile, as stocks plummet even further, the possibility of a radical capitalization seems remote.

Italian NPLs are mostly to corporates -79% of the total- and unsecured -53% of the total-. Low interest rates and high liquidity have not reduced, but increased the risk. Half are covered by real estate collateral, so they don´t have zero value.

The NPL problem has become so large that, years after the 4 billion euro bail-out, market rumours point to a new capital injection from the Italian State that could reach 15 billion euro. A far too small amount for a very large problem. The possibility that the Italian government might take a majority stake in Monte dei Paschi di Siena is not small, in a bank where the ratio of NPL to equity is c102%.

But make no mistake, a 15 billion government capital injection is far from the solution.

Italy needs to undertake a Financial Sector Reform similar to the one that Spain carried out. Creating a “bad bank” and carrying out an in-depth public analysis of the sector´s assets and liabilities, followed by a radical recapitalization program.

What is the good news? The capital ratio of highest quality has improved over the years, albeit less than other banks in the Eurozone and Italian banks have been divesting and increasing capital whenever they could.

In 2015 more than 19 NPL transactions were made, and in 2016 that figure is expected to exceed 30 billion euro GBV (gross book value). Although it´s less than 10% of the total, it is good news of a long-overdue course of action that is expected to accelerate over the next three years.

But here comes the political uncertainty. Will an interim government accept a bail-out that goes against EU legislation, most of the political parties in Italy and the promises of the previous Renzi cabinet?.

Aditionally, macroeconomic data does not support the Italian economy. Italy has been showing a very poor growth rate since 1960, and remains in stagnation in the past two decades. Low oil prices have not helped despite being one of the most sensitive economies to fluctuations in crude prices in the OECD. Italy’s public debt exceeds 132% and debt to operating income of Italian corporations remains above the average of the euro zone and the OECD, according to Moody’s. But most of the problem relies in the semi-state owned entities and municipalities. If we remove the semi-state-owned conglomerates and municipalities, Italian companies show a similar balance sheet strength to German corporates, for example.

The Italian banking system challenges have not created a contagion effect on the rest of the eurozone, but this cannot be considered a relief. As soon as the ECB stops or moderates its quantitative easing program, we could see an escallation of risk premiums and Credit Default Swaps.

The solution is possible and urgent. It should include a comprehensive plan of recapitalization, restructuring of bonds and creating a bad bank.

My biggest concern is that, again, in Italy they might prefer to kick the can forward with the excuse that in 2017 inflation and the economy will sort out the problem, and that shares will rise before issuing new equity. After years making the same mistake, it is time to be realistic. The short squeeze generated by the rumours of an insufficient bail-out should not fool rational investors.