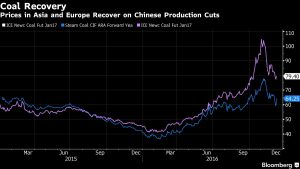 It is not easy to understand. If one looks at media comments, China is the world´s largest renewable capacity installer. However, if we analyze the numbers of new capacity in the country and both the current and long term energy mix, the big winner is coal!

To celebrate that my book The Energy World Is Flat (Wiley, with Diego Parrilla) is to be published in China, I would like to analize the Chinese energy policy.

This year, China reduced by 30% its renewable capacity targets, but that is not a negative. China will install 110 gigawatts of solar and 210 gigawatts of wind by 2020 with the new plan. It is estimated that by 2020 15% of its energy mix will come from non-fossil fuel energy.

But 73% of electricity in China comes from thermal generation. And in 2015, 50% of the new capacity was also thermal. China´s energy mix in 2020 will come overwhelmingly from coal (65%) and nuclear. Solar, for example, will likely weigh less than 5%.

In China, the energy mix is decided from three perspectives: Benefit for the Chinese economy and jobs, competitiveness and local control of technology. Once we understand this, it is normal to understand why coal is still supported. It covers the three requirements, jobs, cost and control of the process.

Between 2013 and 2015, 50.8 gigawatts of capacity were added in coal generation. This means that in two years coal added almost half of what China plans to install to 2020.

According to official figures, there are a further 42 gigawatts of coal plants under construction, with 11 gigawatts approved only in 2015. Meanwhile, China has retired less than 10 gigawatts of obsolete capacity. If we add the figures on nuclear energy, China’s decision to double its nuclear capacity to 23 gigawatts more and go ahead with another 50 planned gigawatts places to China as the largest installer of new nuclear power in the world ( 136 reactors of approximately 340 planned in the world ).

The question, therefore, is why?

On the one hand, China’s consumption accounts for almost 50% of global coal demand, but it imports very little. First incentive in favour of coal: the balance of payments.

On the other hand, the vast majority of coal companies in the country are state owned. Second incentive: “Support” employment and “indigenous industry.” China knows that replacing coal with renewables has a negative net effect on employment, even if it is unquestionnably a creative destruction and positive from an environmental point of view. So transitions from fossil fuel to renewables have to be slow, because they affect jobs and can increase the cost of energy dramatically.

Finally, the cost and technology control. For China, which seeks to reduce its huge imbalances exporting, launching a race to renewables that ignores the cost of energy would be suicidal. But it is even more negative for its technology payment account, so it can be strategically potentially dangerous.

Despite the drop in costs, the average cost of electricity from coal in the country is much lower than solar photovoltaic, less than half. The CEO of Canadian Solar or Dinghuan Shi, chairman of the China Renewable Energy Society, estimate that solar PV will be competitive with coal in 2025, not earlier.

Of course there are environmental factors that should not be ignored, and China has reduced emissions significantly in the past years. So much in fact, that the CO2 emissions reduction of 2015 is equivalent to 200 million tons of CO2. That is roughly equal to the cumulative emissions from the 100 countries with the lowest emissions 5 . China is now on a path to achieving its Paris climate commitments well before its 2030 target date.

China´s energy revolution will happen as long as it does not damage competitiveness and jobs. China can benefit more than any other country in the world from what we call the energy broadband and the technological revolution … When costs are proven to be lower.