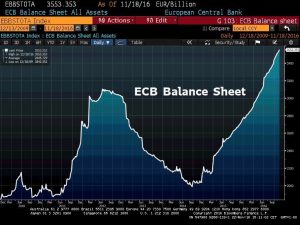 When Mario Draghi, the president of the European Central Bank (ECB), analyzed the eurozone’s macroeconomic and monetary data on Thursday, he confirmed a very fragile environment and disappointing figures. However, the stock markets reacted on the upside. Why?

In terms of monetary aggregates, the increase in M3 fell to 4.4% annualized compared to a growth of 5.5% in September. Loans to the non-financial sectors grew a meager 2%. Remember that all this is happening with the greatest monetary stimulus seen in the history of the euro.

What about inflation? It increased from 0.4% in September to 0.6%. But it is fundamentally because of the cost of energy. Draghi himself recalled that “there are no convincing signs of recovery of underlying inflation” – that which excludes energy and food-.

The velocity of money (nominal GDP / M2) – which measures economic activity – is at multi-year lows and more liquidity and low rates does not help improve it. QE is disinflationary for prices because it sinks interest margins of banks by artificially lowering bond yields and makes economic agents behave with more caution – not rush to spend or to borrow – due to the perception that the cost and quantity of money is artificial. But it is very inflationary in financial assets.

What these figures tell us is that growth is still very poor and the huge amount of monetary stimulus created from the Central Bank does not have the effect that its defenders promised. The European Central Bank’s balance sheet has soared to 3.58 trillion euros, more than 400 billion euros above its 2012 high, and the accumulation of risks is more than evident, even if many decide to ignore them.

Since the repurchase program was launched in 2015, the excess liquidity accumulated in the system has soared to more than one trillion euros.

The euro-zone has more than 4.2 trillion euros in bonds with zero or negative rates, according to Bloomberg.

The ‘inflation’ that we are told does not exist, lies in the huge bubble of bonds and ultra-low bond yields. This accumulation of risk is exactly as dangerous as that of 2006-2008 but potentially more difficult to contain, since economic agents are not in a better position of solvency and repayment capacity today than in that period, particularly governments, which are much more indebted. This leads to ineficient and heavily indebted governments falling into the trap of thinking that cheap money will always exist and decide to increase their imbalances, entering into a debt shock when rates rise.

If EU countires get used to ultra-low rates the risk of multibillion nominal and real losses in bond portfolios and pension funds is enormous, because the tiniest tilt in inflation will make the house of cards collapse. Goldman estimates losses of $2.5 trillion worldwide from a 1% rise in inflation. It is so relevant that if interest rates raised a stunted 1% in the EU it would lead to massive budget cuts to maintain current deficits.

The perception of excess savings is incorrect in heavily indebted and overcapacity-ridden economies. There is talk of excess savings with respect to investment because the 2001-2007 period of excess spending and debt bubble is used as “normal”. And the central bank floods the market with liquidity thinking that investment will increase if rates fall. As if such drop in rates was “demanded” by the market. But investment is still stagnant with zero rates. Because there is no demand for solvent credit and there is spare capacity after years and years of industrial plans and excesses.

Risk assets jumped on the evidence that such excess liquidity will continue to inflate the bond bubble and hopefully support other financial assets. And in December 2017, if the monetary laughing gas ends, governments will blame Draghi, or Merkel, and not the inaction of a European Union happy to continue with interventionist and anti-growth policies.

And no, most European states are not prepared for the end of QE. They are geared to its extension.