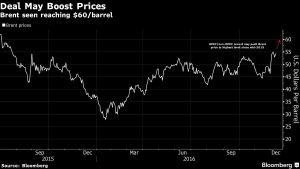 One of the big problems of this agreement is the alternative of the devil. That by which a decision is likely to have negative or very negative consequences.

The main beneficiary will be the shale in the US, immediately taking the opportunity to increase volumes. US rigcount surged 27 units to 624 on the week ending on the 9th december, up 220 since May 27 and the biggest increase since 2014.

Then there is the issue of compliance.

OPEC has a notorious history of non compliance with supply cuts. Members tend to cheat on quotas and, as prices rise, volumes pick up again.

But let´s remember that this “deal” comes after OPEC increased production from 30mbpd to 33.6mbpd. That is, it´s a deal to cut just a part of the increase, to 32.5mbpd.

I have been invited four times the annual meeting of OPEC in Vienna and I have seen many myths spread by the media. Let us remember for a moment why OPEC agreements do not happen easily.

Let us remember that the most “optimistic” see a market balance in 2H2017 after this cut pledge, so there is a strong risk that it may not happen at all.

Even after these cuts -if they happen-, oversupply in the market exceeds 500kbpd and spare capacity is higher than 2.6mbpd. Meanwhile, the IEA has revised up estimates of US production by c500kbpd. It could go as high as 1mbpd in less than a year.

Dallas Federal Reserve President Robert Kaplan estimates that US oil production has potential to top 11mbpd in less than two years and most market participants, including the IEA, see a very likely short-term increase increase to 9mbpd from current 8.6mbpd. Continental Resources CEO Harold Ramm goes as far as to say that US shale producers could increase output to 20mbpd.

This oversupply is also evident in the huge amount of oil stored on ships, already at the same levels of 2008, about eight million barrels.

OPEC will only succeed if demand strengthens and oil producers make it clear that they are much more flexible and competitive than other alternatives. If they fall into the trap of a pointless cut, substitution and technology will accelerate the process of stripping oil of its crown as king of primary energy sources.