20th July 2011
Venezuela’s proven oil reserves have soared over the year to a level that surpasses Saudi Arabia.

Venezuela’s proven reserves amounted to 296.5 billion barrels, ie a 40.4% increase over the previous year. Furthermore, it exceeds the reserves published by Saudi Arabia, which reached 264.5 billion barrels . These details were published in the Annual Statistical Bulletin prepared by OPEC for 2010-2011.

The problem with Venezuela is the quality of its oil and the industry itself. Venezuela’s oil is heavy and ultra heavy. Low quality and high cost. Additionally, the national oil company, PDVSA is a very inefficient, bureaucratic and slow company, and only if it eliminates these obstacles and returns to the be the efficient company it was twenty years ago will the country have a competitive and world-class oil industry.

This massive increase in oil reserves, 40%, which comes with a giant increase of 24% from Iran, does not come as a surprise to the companies present in the area. It’s not magic. It is because the OPEC Secretariat has introduced its own change in methodology to include extra-heavy oil in figures for Venezuela and Iran (some 800kbpd of production for Venezuela and up to 950kbpd for Iran).

These reserves were always there, but given that they were mostly heavy oil, very expensive to produce, it required a high oil price to declare those reserves as commercial. Once OPEC has established an oil price deck closer to the current level, these reserves are considered proven and commercial. In my calculation these oil fields requires an average minimum  $85-90/barrel price to generate 15% IRR.

This reserve upgrade doesn’t change the current dynamic of supply and demand in the oil market, but unquestionably could change the balance of power at OPEC. And not to a nicer side.
In the meantime, after a long controversy about the actual level of Venezuelan oil production, the International Energy Agency (IEA) revised up the country’s oil production by an average of 393 kbpd for the past four years, placing it at 2.5 mbpd. Nonetheless, the IEA estimates remain around 350k b/d below the official data. Part of the difference could be due to the inclusion of condensates production in the official data, which accounts for slightly more than 100k b/d, and other exports to non-OECD countries, such as Cuba (unaccounted subsidised barrels), that could be hard to verify. 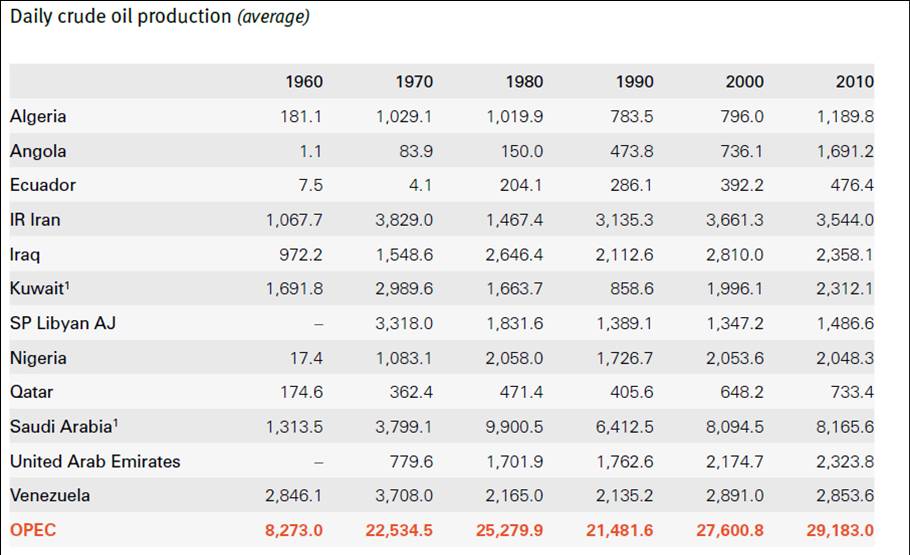 The Venezuelan oil basket price for 2012 if we use $104/bbl increases Venezuelan oil exports by approximately $9.0bn, according to Barclays which takes the country’s current account balance estimate to $23.bn (7.6% of GDP). This week’s increase of reserves, and the subsequent larger piece of OPEC quota that Venezuela can collect, will significantly strengthen the country’s financial position.
In the next OPEC meeting the two hawkish countries, Venezuela and Iran will have a substantial higher power than Saudi Arabia, Kuwait and Emirates have today. This is because quotas are set according to proven reserves, and Venezuela and Iran are supporters of a tighter quota policy and defenders of a stricter policy towards the West, pushing for higher oil prices, as the two countries need $80/bbl at least to balance their budgets.

Venezuela and Iran will likely look to achieve two goals in the next OPEC meeting: be able to produce more oil than Saudi Arabia while at the same time keep quotas unchanged at 24.7mbpd (real production now at c28mbpd). Basically take a larger part of a cake that will not grow. It is unclear if Saudi Arabia will agree to this. The Kingdom has already increased production by 800kbpd this year to a record 9.6mbpd. The Kingdom seems to be looking to attend the next OPEC meeting from a firmer standpoint regarding their production (they don’t want to be again the only ones to comply with quotas) and also seems to be looking to establish itself as the key balancing factor to an oil market that the IEA sees tighter into year-end. Meanwhile Iran has increased output despite the embargo, as we mentioned here. There is clearly a battle of opposing forces going on.

The problem, from the economy point of view, is that Venezuela, along with Iran represent the most aggressive stance towards the Western countries and try to force a higher price for crude. If they gain control of the OPEC decisions it will likely lead to further instability and volatility in the market.As I mentioned, Saudi Arabia increased its production in June over January by up to 800kbpd because they foresaw this reserve upgrade, and subsequent quota re-shuffling.

Things will only get more interesting as we approach the next OPEC meeting. We will see.