This article was published in El Confidencial on August 27th 2012

“If technologies have economic merit, no subsidy is necessary. If they don’t, no subsidy will provide it”. Jerry Taylor.
“Governmental subsidy systems promote inefficiency in production and efficiency in coercion”. M. Rothbard

This week the press has highlighted the discrepancies between two of Spain’s top ministers regarding the much delayed electricity sector reform. The shares of many of the companies involved have moved between +7% and -6% depending on the words of one minister or another.
Let me begin by saying that I do not find anything wrong when a company hires a consultant to defend its interests and that, when they do, they do it with the best. And I believe this controversy creates a great opportunity for the government to demonstrate that their decisions are not influenced by one lobby or another, but focused on the only thing that matters: that Spain cannot continue destroying its competitiveness with a massively subsidized and inefficient energy sector, where the electricity bill has soared by 40% while demand fell and where excessive renewable subsidies count for 39% of the costs (excluding energy component) of the system. 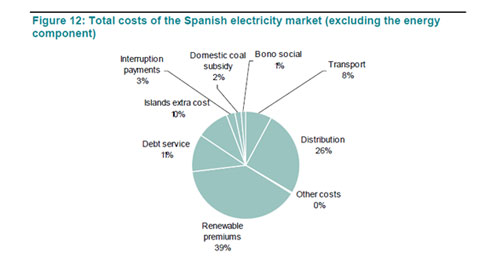 To eliminate the tariff deficit accumulated until 2012; electricity bills will have to go up by an estimated 35%.
The Spanish tariff deficit is the difference between the real system costs and those recognized in the tariff, where the result is an IOU from the government that is financed in the balance sheet of the companies until it is settled. This tariff deficit is part of the infamous “Spanish private debt,” which is in no small part made of outstanding commitments from the government and funded by the balance sheet of private companies. It is also the consequence of a highly optimistic central planning of the system that incentivised overcapacity and massive new build that has made companies more indebted, with or without acquisitions, and less and less profitable. 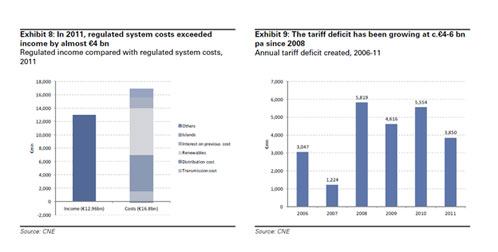 The tariff deficit myths are:
– “Companies make billions out of it” We must differentiate between accounted and real profits. We sometimes forget that companies account for the tariff deficit as a “receivable” so their profit and loss is not made of real cash. As such they generate no free cash flow and borrow more and more. Investments in Spain, from generation to distribution, generate less than 7% return on capital employed. However, companies are told by governments to undertake massive investments, but without legal certainty or acceptable returns. And there is always someone willing to build more for less.
–  “It is a temporary problem that goes away with the latest measures.” The latest government measures to reduce the costs of the system seem to look to collect from the efficient and cash generating businesses to cover inefficiency errors, but these measures do not solve a problem of subsidies and overcapacity, as they have been mainly applied on one-off costs, with a maximum impact of 2 billion euros, yet they do not take into account that in 2013 renewables subsidies will rise by another 2 billion to almost 9 billion a year in 2014 due to the plants that are coming on stream, bringing the tariff deficit up again.
–  “Renewables are unfairly demonized.” This is true, in part. The tariff deficit is not an issue created by renewable energy, but by the excessive cost of certain subsidies-particularly solar photovoltaic- where massive premiums were given to build 400 megawatts, ending with 3000 megawatts built – the consequences of an extremely generous aid system and a poorly controlled approval system, where all regional governments gave permits to plants regardless of the 400MW limit. But who pays that “tiny” 5 billion per annum mistake?. No one has anything against renewable energy. I love to read that Spain will build nearly 600 megawatts in solar PV without subsidies. The problem in Spain is the accumulated upfront cost of those subsidies, the fact that the excess cost is not paid but deferred in the tariff, and the claim from some operators to continue with the same scheme of subsidies and installations when all 2020 targets have been fully met. Many renewable companies in Spain have followed a model of builder-developer entering a country, and maximizing capacity to move on and grow in others. But there is no eternal growth in each market.
– “Coal generates no deficit because it is a social cost.” Other subsidies maintain inefficient capacity alive, like coal, which gets 600 million a year. If the rationale to keep coal is “social” it should not accumulate costs to the power bill, but be paid by the regional governments like healthcare or social services. The problem is the habit of subsidizing outdated technologies while building up the deficit that is generated by other new technologies.
–   “The renewable subsidies are offset by the fall in wholesale prices.” The cumulative net reduction in wholesale power prices between 2005 and 2011 was less than 9.2 billion euros, according APPA- while accumulated subsidies to renewable energies shot to 25 billion in the same period. In any case, talking about the benefits of renewable energy on price is almost comical when the power tariff to consumers has risen almost 40% in four years.
–   “The tariff deficit is created by the manipulation of wholesale price by large utilities”. It would be the most disastrous manipulation ever, when wholesale prices have remained exactly in line with the energy mix, below Italy’s, France’s and Britain’s, and in line with Germany. 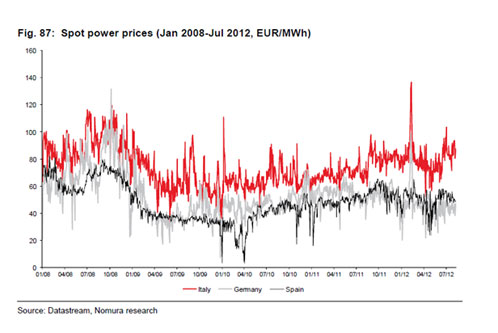 –  “Nuclear and hydro should pay the deficit.” They do, but it makes no sense to use cheap sources of energy to subsidize more expensive ones. And let’s not forget the string of regional and national taxes that traditional utilities suffer.
–   “If nuclear capacity is shut down, there would be no overcapacity.” Sure, and if EDF and France dismantle their 58 nuclear reactors, there would not be any overcapacity there either. And if Saudi Arabia closes Ghwar and Khursaniyah there is no oversupply of oil. We have to take advantage of technologies that are cheap while they work, and work well, because we need cheap, non-interruptible power. We forget that solar and wind are interruptible and cannot be installed exponentially because the land occupied by megawatt is finite. And the cost of adding a network connection is not properly taken into account.

What has led to this problem?
An optimistic central planning based on demand expectations -2% pa growth- which were completely unjustified, an increase of generation capacity and infrastructure -25 000 megawatts of additional capacity in gas and 35,000 megawatts of renewable- and the joy of subsidies to every technology without control –renewables, coal subsidies, capacity payments, island grants…
As subsidies mounted over each other, capacity rose and demand collapsed, we find a power system in which the annual costs -guaranteed by the state- exceed revenues by c4 billion euros … and regulation has always been modified to tax the efficient to subsidize not only “nascent” technologies, but also “dying” ones.
The solution
The solution to this issue will have to be a compromise between the industry, the entire sector-traditional and renewable-, the State and the consumer, and cancel future subsidies in all technologies. From the existing deficit, part will have to be absorbed by the energy sector, the state-responsible for the optimistic planning- and consumers, who wildly applauded the green economy and coal-mining subsidies without knowing its costs.
The German model is simple: subsidies are paid 100% by retail consumers, so people know the true costs of green energy – and 70% strongly agree- while industries, many highly energy intensive as BASF or BMW, do not pay the cost of those subsidies. Therefore, competitiveness does not sink and the country doesn’t suffer from industries closing down due to excessive power costs. Additionally, unnecessary capacity is removed, while inefficient companies go bankrupt, as they should.
The American model is interesting. Investors are given tax incentives, not direct subsidies, for renewable projects. Thus, if there is no investor interest or projects are not economically viable, the system will be reducing unnecessary capacity by the law of supply and demand and, of course, if a company has to file for bankruptcy, it does.
Spain needs to be absolutely clear in its power sector regulation, guarantee legal certainty and avoid changing rules retroactively to solve past mistakes. But the consumer cannot support all costs if everything is subsidized and if there are no market mechanisms that enable cheaper and more efficient technologies to displace the expensive inefficient ones. Our excellent renewable companies are competing exceptionally well in the previously mentioned international models. So let’s not ask at home what we don’t need abroad.
Seizing revenues from the efficient to give it to the inefficient does not help. More importantly, a couple of years later the need for revenues will make the inefficient of today suffer as well.
I commented a few months ago in my article “the problem of fixing the price of power in government offices and not in markets” that Governments and some companies do not like to liberalize. They live very well asking and giving favours while the bill is either not paid or sent to the consumer. Amazingly, while governments see power costs soar, they are surprised to see that the country’s industries close down and that demand falls.
Mistakes in planning –always from excess, of course- have led to a power sector overcapacity that has many similarities to the housing bubble. The generation fleet overcapacity in Spain is enough to cover demand for years. Let us use this opportunity to end the current tariff deficit through market mechanisms.