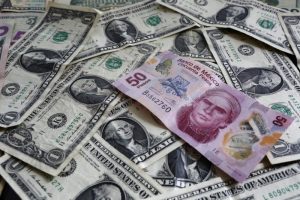 Last week, the Central Bank of Mexico intervened twice attempting to defend its currency  with more than disappointing results. The Mexican peso has suffered one of the largest devaluations of any currency in the past twelve months, only comparable to that of the Turkish Lira, and weakened again shortly after the interventions.

Despite these measures, the local currency continues to be under pressure and the cause is mainly the United States rate hike.

On the one hand, Mexico suffers, along with the rest of emerging markets, from capital outflows due to the rise in interest rates in the US.

As US ten year bond yield rises, emerging market debt loses its appeal, especially at current levels. These countries had seen a record inflow of capital over the past eight years thanks to excess liquidity and lower rates in the US, and issuances yield fell to a 30-year low. Today, even at 7.6% these rates are less attractive compared to a US 10-year bond, close to 2.4%.

That is the main reason, not Donald Trump’s tweets, but of course the president-elect’s messages regarding NAFTA and his criticisms of automobile companies do not help.

Many analysts compare the current risk to that of 1994, shortly before the so-called “Tequila crisis,” which triggered a Mexican stock market crash and a domino effect on other emerging markets.

Why? The combination of capital outflows and rising current account deficit, which could lead to a huge liquidity crisis.

But, nevertheless, there are very important mitigating factors.

Although the outflow of capital is true, it is not at worrying levels. In addition, in 2016, Mexico was the third largest recipient of net capital , despite low oil prices and risks in emerging economies in an environment of low global growth and weaker international trade.

In addition, although foreign exchange reserves have declined since 2014, they remain at record highs and more than seven times above 1994 levels.

One of the distinguishing characteristics of this crisis compared to 1991 or 1994 is precisely that central banks of emerging economies have carried out a correct policy of preserving foreign currency reserves at the highest possible level, thus avoiding a liquidity crisis. Exactly the opposite of what these countires did in the 90s crises, where reserves were almost depleted trying to “defend” the currency.

In fact, the action of the central bank of Mexico in these days can be called more “technical” than the desperate ones of that time.

If we analyze the perfect storm that happened in 2013-2015 in emerging countries, a dramatic crisis has been avoided despite the abrupt fall in commodities, net capital outflows and the global slowdown in trade (the “sudden stop” effect that we mentioned in 2013 here).

In this period, Mexico’s foreign currency revenue has been reduced by a third from the highs, and the fact that massive recession and crisis has been avoided proves that many things are very different today in Mexico.

These important differences must be taken into account when we read some alarmist messages, but we must also be cautious because the situation for emerging markets remains complex given the “hoover” effect of the US rate hike. A strong dollar, rising rates and inflation provoke a dollar-sucking effect out of riskier markets and back into the US domestic market. Especially after almost a decade of extraordinary capital flows into emerging markets.

Let us not forget the risks, the macroeconomic, political and monetary threats. The end of excess liquidity and cheap money is here and countries like Mexico will have to adapt to a level of investment and capital flows that will likely be much lower than those of the last eight years.

Mexico will have to take advantage of a year in which oil prices have stabilized to match its investments to a new reality, closer to that of 2000-2006 than the three US monetary stimulus programs. But if we have to look at risks, we also have to look at opportunities, because Mexico has always been a better option compared to other countries with greater risk.

1 thought on “Mexico… Another Tequila crisis on the way?”