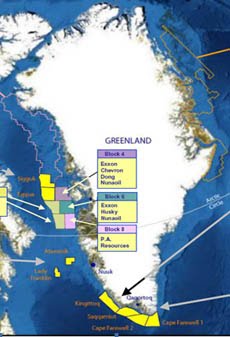 (Article published in Cotizalia.com in Spanish on Sept 23 2010)

Today we will talk again about finding new oil frontiers. And it’s time to talk about the arctic. Until recently a disappointing area for oil exploration, both due to environmental constraints, water limit disputes and dry wells. But the war for natural resources, the recent encouraging exploration results, and the constant global goal to diversify and achieve energy independence, is bringing back billions of dollars in investments to Greenland.

Greenland has a lot of oil. Studies of various consultants, PFC and the U.S. government estimate that it has the second largest oil reserves yet to discover, larger than the discovery of Brazil and Kashagan and behind Iran (Zagros). We talk of more than 45 billion barrels. And yet we have only seen minimal exploration activity in the last ten years.

The technical difficulties and costs are not negligible. Now, however, everything can change, and turn Greenland in the great new frontier for the oil industry after Uganda, Ghana and Brazil.

In the 70’s, companies such as Chevron, Total, Mobil and Statoil explored Arctic waters without success, and until recently the results have been more than disappointing, as all wells explored were not viable. I do not want to bore you with technical details, but one of the reasons that there were no discoveries was the type of oil accumulations that were being sought, focusing on concentrations in sediments of the Tertiary or Cenozoic era, ie about 65 million years old . However, the oil discoveries in Brazil and Ghana have made the industry more recently set its targets in sediments from the Cretaceous era (about 145 million years old) and in deep water, more expensive and riskier, but with enormous potential .

West Greenland can be one of those surprises. Just the same as in the first part of this decade the industry doubted the exploration potential of Brazil, West Greenland probably shows a very similar accumulation.

However, some media say, erroneously, that the exploration in Greenland is only possible thanks to global warming, which allegedly contributed to the melting of the ice in the area and using alarmist arguments about the impact of the oil industry in the area and the ecosystem. For starters, exploration in the area has been carried out since the 70’s, as I said, with no environmental impact. The difference is that the technology of deepwater drilling has improved substantially, allowing access as already mentioned sediment depths greater than, 2,200 feet and 300 km from the coast, completely away from any ecosystem to be preserved.

The challenge of industry in Greenland is not to take advantage of the alleged global warming, which of course is not evident in the area, with oversized icebergs migrating from North to South that have grown, not shrunk, and temperatures which have dropped two degrees on average since Statoil prove its last well, Qulleq 1, in 2001. The industry challenge is to prove the commercial viability of this enormous potential. Considering the current cost environment, projects in Greenland recover investment at $ 60/bbl, with development costs of about $ 25/bbl and operating costs of $ 12-14/bbl. In other words, to get a return on investment (IRR) of 25% on a typical minimum investment of 5 billion dollars, you need an oil price of $80/barril.

Independent explorers, good friends of ours many of them, are the ones taking the lead in the new frontiers. Cairn Energy, is conducting an exploratory program of 14 wells in Greenland, the highest risk (especially in the south, where it is less obvious to see the oil accumulation), but high potential. And the big oil companies are already participating in the race for operating licenses in the area. Exxon, Chevron and others are already prepared. We will follow this closely.