This article was published in El Confidencial on October 6th 2012

“Spain is not Uganda, it is Enron” Christopher Mahoney 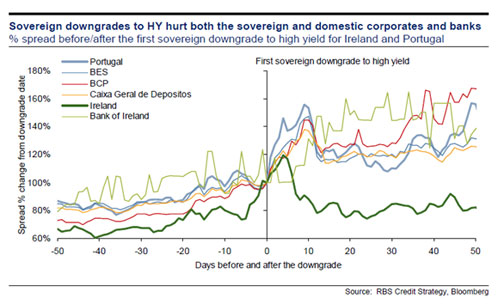 One of the most dangerous problems in Spain today is to reject the international analysis about the country’s difficulties as malicious. The market is very concerned about Spain today, but if the steps to resolve the debt crisis are not taken, Spain could quickly go from a cause of concern to being ignored.

We cannot say it was a successful week for the “Spain brand”. The country was mentioned as an example of hypertrophied government size in the Romney-Obama debate, the EU is wary of the deficit targets for 2012 and 2013, and the country gets compared with Enron. I do not like it, it hurts my pride, but we must pay attention.

The continuous fluctuations and messages about the request or a bailout are not accidental. The reality is that it is impossible to rescue Spain. It would cost a trillion euros, according to estimates by Moody’s and Egan Jones, and governments have to find ways to avoid the impact on the Eurozone. 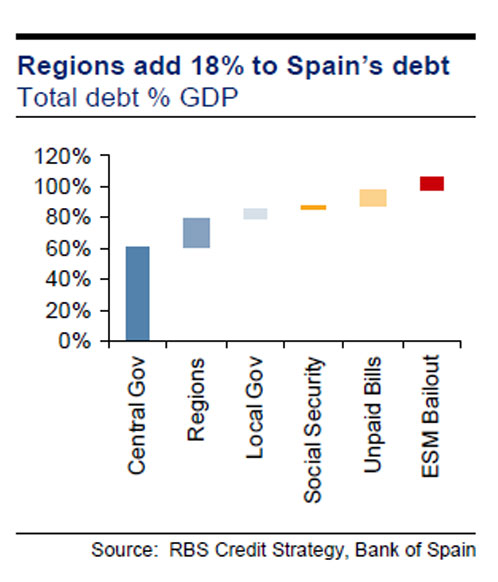 The meeting of the presidents of Spain’s regional governments was an example of “trainwreck” for many investors. There was talk of compromise, but more importantly, of “sharing the deficit”-more debt, unconditional support -more debt- and “growth policy”-more debt. There were no talks of political spending cuts, just trying to increase the deficit. When talking of deficit read “losses” and read more taxes.
This is what we must avoid. Chris Mahoney thinks the country has more than a debt problem, but, just like Enron, Spain has a huge dependence on credit, and without credit its GDP mirage fades. Mahoney says that Spain depends on “a positive image” to continue to access more debt. Spain, according to Mahoney, needs to create the illusion of future growth to attract more debt to keep the illusion of wealth and to continue creating a debt snowball.
I disagree. The scheme of eternal debt is widespread across the OECD, except that in Spain we took the party by storm and the hangover will be tougher.
Spain is not Enron. It can stop the snowball of debt in a week cutting wasteful spend. In the debate between Romney and Obama Spain had the dubious honour of being signalled as an example of bloated government spending, but unlike other countries, its massive expenditures could be cut immediately given the enormous size of subsidies, 1.4% of GDP.
Enron could not cut debt because its assets simply did not exist. In Spain the private debt of the country, which is huge, is supported by assets, which could be better or worse but sellable, and as such, debt can be reduced with divestments and capital.
The risk is not being Enron, but to be perceived as a kind of Rumasa –the industrial Ponzi-scheme created by Mr Ruiz Mateos in the 70s- a huge web of opaque cross-holdings between state, banks, and companies to hide debt and pump up asset values between close friends and cronyism. This is only solved with more foreign investment, opening the market.

Why do they doubt that Spain will grow again?

When Sean Egan warns that Spain will not grow for five or ten years, what he analyses is the inability to generate industrial demand and investment with such a monstrous debt and a huge tax burden. If we maintain a confiscatory tax policy, legal uncertainty and the bloated weight of the government, he could be right. Considering that Spain is an ultra-cyclical economy, it could also recover quickly if the burden of taxes and government is reduced. Let’s face it, exports are improving and foreign investment rebounded slightly, although it’s nothing to get excited. Most of the deleveraging is not completed, because the reduction of public and private debt has not yet really begun aggressively.

Investors and analysts warn that the problem in Spain is the increasing burden of financial commitments without demands.

Egan Jones downgraded Spain last week. They cite as most important elements of its downgrade the pace of industrial demand destruction, and the debt overload of the regional and bank bailouts. Let’s remember that when the year started the capital needs of banks were supposed to be a maximum of €40 billion and now the official figure has risen to €60 billion, while many analysts assume capital needs of €200 billion.

The problem is that in the vicious cycle savings banks-state-regions-spending-debt there is never a bankruptcy, no credit responsibility and, therefore, a perverse incentive for mismanagement.

I see that the bond market, taking advantage of the Draghi effect, is trying to accumulate five-year Spanish credit default swaps, although the volume is still small. Investors perceive the following problems that could cost up to 60 billion more than expected in 2013, bringing the deficit close to 6%, well above targets:

* Giving full and unconditional support to the regions. The regions have already consumed almost all of the Liquidity Fund available to them, with extremely mild conditions. The government says that the state could intervene the regions if they don’t comply with the targets. Let us see what government dares to intervene Valencia or Catalonia.

The regions have an outstanding debt €191 billion, 18% of Spain’s GDP. All guaranteed by the state. Having the state as guarantor creates perverse incentives. Regions are bailed out but no one dares to intervene them, and even if this happens, the taxpayer pays the bill any way. The autonomous communities complain that their individual deficit is very low. Remember: deficit = loss = more taxes. They account together for 33% of the total Spanish deficit.

* Unconditional support to bankrupt savings banks. The Spanish banking system balance sheet is 340% of the country’s GDP and, moreover, is extremely exposed to sovereign debt. With non-performing loans of 9%, and the drop in deposits it is likely that we will see another round of “bailouts” in 2013.

* The “bad bank” will buy real estate assets not with enough discount, at”economic value”, that is, betting that the long term everything will go up. This will require an injection of public capital to support the bank’s finances. And the longer it takes to sell, more public capital injections will be needed. All this is done to “get credit flowing” to the real economy. However, banks cannot recapitalize themselves as requested by the EU and at the same time provide credit to a “real economy” that sees increasing taxes and decreasing margins. That’s like blowing and slurping.

European CDS against Spain. Crazy
The European Union is greatly concerned. They doubt Spain will comply with the deficit targets in 2012 and 2013. The IMF believes that Spain will not reach a 3% deficit until 2017. The EU is so concerned that after criticizing Credit Default Swaps for years, and given the magnitude of the potential problem, between 700 billion and one trillion euros, the EU itself and the ECB are considering issuing European credit default swaps for the Spanish rescue, according to Bloomberg .

This is a recipe for disaster, because it shows that the EU itself is wary of the ability to repay debt of Spain and seeks to attract foreign investors to finance the bailout, insuring against a default of Spain. What happens? That CDS overshoot, which spill over to the sovereign debt but also to the debt of European Stability Mechanism (ESM).

A debt problem is not solved by more debt. If Spain stops the bailouts and establishes unquestionable credit responsibility, negative surprises are likely to be decreased greatly. A further delay in the deleveraging process from the expenditure side will mean a longer path to recovery and revenue growth. But it seems it does not matter. Someone will pay the debt. Some day.

My comments to CNBC here: “We have a lot of earnings downgrades to come and an environment where companies need to reduce their debt significantly”