“We will continue with Fed purchases until unemployment falls below 6.5%” Ben Bernanke

Non Farm Payroll data is positive. No doubt. Payrolls has been remarkably stable, but this represents an acceleration. All the 3 month, 6 month, 12 month averages are now at around 200k post revisions… But it is also within a broader, weak context. Unemployment is still 7.6%.

The BLS: The number of persons employed part time for economic reasons (sometimes referred to as involuntary part-time workers) increased by 322,000 to 8.2 million in June. (http://www.bls.gov/news.release/empsit.nr0.htm)

From CS: “Today’s employment report, while stronger than anticipated, didn’t challenge our expectations sufficiently to change our base case for Fed policy.  We still look for the FOMC to scale back the size of its current $85bn/month asset purchase program later this year by $20bn”.

It is amazing how often we hear in Europe that Obama and printing money have “created” five million jobs. As if governments, or central banks, and not private enterprises, were real job creators. It obviously is a message that fits beautifully for defenders of central planning and intervention. “The Government” creates jobs. Monetary policy creates jobs. Hurrah!. No need to invest or innovate, let’s print. Really?.

Reality is that “monetary policy aimed at unemployment” is an excuse to continue feeding the Leviathan of bloated governments and massively leveraged financial entities. Keep sovereign yields low, yet raise the debt ceiling a 98th time, increase public spending… feed Wall Street some beta bloating markets +150% and bringing junk bonds to lowest yield ever… And deliver financial repression to the citizens… Who pay for it all with higher taxes to top it all.

Look at the sharp fall in the labour force participation rate—the percentage of the population that is working or looking for work. This figure fell to 63.3 percent, the lowest level since 1979. Half a million people gave up looking for work in March alone.

The fall in the labour force can be explained in part by the chronic state of long-term unemployment. The average duration of unemployment increased in March to more than 37 weeks.

Interestingly enough, on one side we are told that “stimulus works” because allegedly millions of jobs are created yet at the same time, in order to justify more stimulus, the Fed members talk over and over of “very weak labour market” and “sluggish recovery”. It’s beautiful.

Feed the promise, and deliver the fear. This will keep the endless carrot and stick of monetary stimulus.

Even if we believed these policies have created 5 million jobs (and let me say it again, they haven’t as you can read here and here), the cost is astonishing. 3 trillion dollars added to the Fed balance sheet!!!

Oh, wait… but Europe destroyed 4.5 million jobs while the ECB launched €1.5 trillion of expansionary programs and 200 billion of “growth plans” from governments (2008-2009)... Forget it… That is because Europe “didn’t do enough”, “it could have been worse” and “it needs to do more”… The Neo-Keynesian trilogy of excuses. 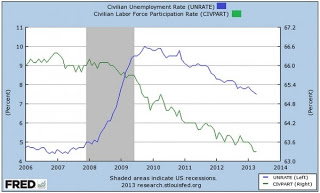 Even Ben Bernanke and David Stockman, in different areas, alert of the poor labour market and atrocious economic improvement despite trillions spent in QEs. However, adding to the “positive effects of stimulus” the jobs created in the period by Oil and Gas -if anything, an industry that received no help or support from this government- is amazing to say the least. An industry that has created c680k jobs and added 75 billion to GDP in 2012 alone cannot be deemed as a “consequence of stimulus”. 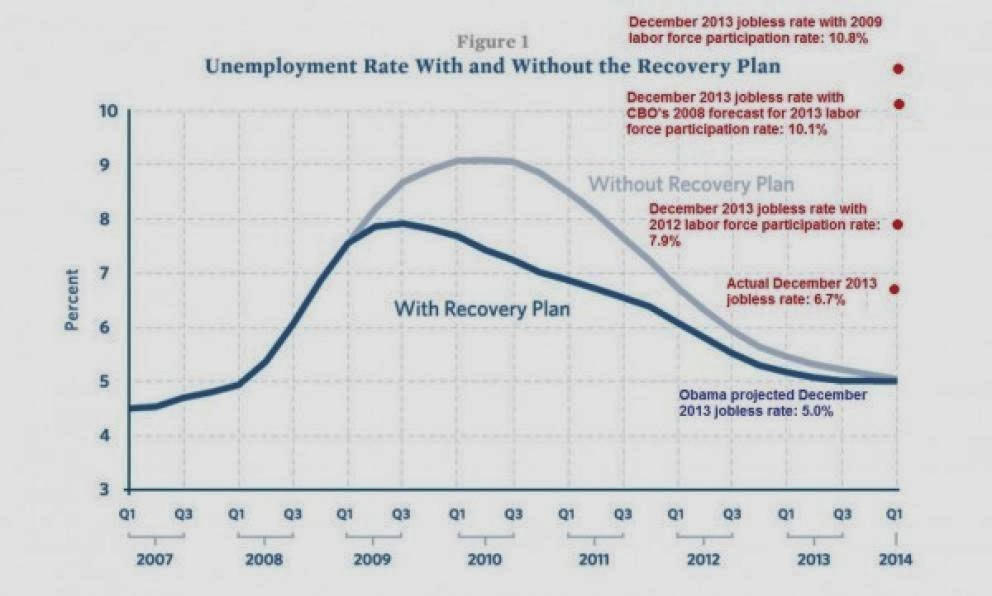 I remember when I lived in the US and we were threatened that “without stimulus” unemployment would go to 7%… Congratulations, c$3 trillion afterwards, it’s at 6.7% and with 15% of the population of the US living on food stamps. 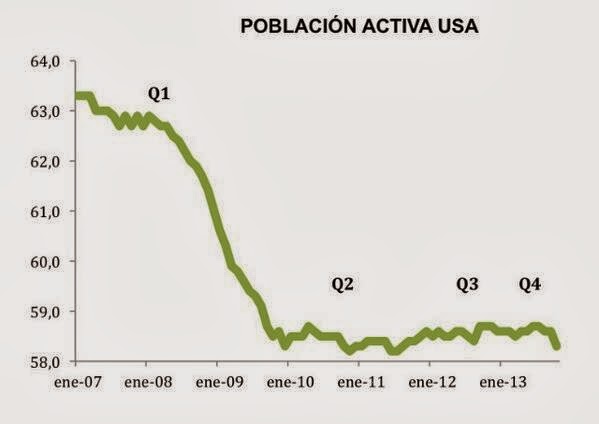 Let’s put things in context: A monetary stimulus which today means c6.5% of the GDP of the United States in annual purchases of bonds and other assets by the Federal Reserve. Now remember the promises. With the stimulus plan announced in 2009, the U.S. unemployment rate would drop to 5% by 2013. Today it is 6.7%. Not impressive, right?. Well, it’s worse if we include the ‘zombies’. Removed from the lists. See the attached chart.The labor participation rate in the U.S. has plummeted to 62.8%, the lowest level since 1978.
Americans ‘out of the labour force’ exceeded 91.8 million. Demographic effect?  Nope, especially comparing nations of the OECD. I recommend you read the Real Unemployment Rate .In real terms, the U-6 data show that the real unemployment was 14.2% when the ‘miracle’ solution of printing money arrived, then rose to 16.7% and is now 14.4% today.
Since the QE “monetary miracle”, 11.6 million American workers have “left the labour market”. The United States has only created one million jobs … and largely temporary.
Nearly 1.4 million unemployed have lost their unemployment benefits this week in the U.S…. This effect will reduce “unemployment” by 0.25% … Taking them out of the lists.
But besides part-time jobs soared to 16% and the percentage of American workers who work part-time but want a permanent job has soared to highs of five years, 10.1%. This with a steroid shot to the economy of almost three billion dollars. A dismal failure .But remember:
… It could have been worse
… It wasn’t enough
… We have to do more
By the time the monetary policy swindle becomes evident to the population, a few trillion more will have vanished.
In any case, we will continue to believe in the dream that printing creates jobs… while government and investors in risky assets laugh their way to the bank. It’s all soooo social.

2 thoughts on “Stimulus is not working: The truth about US jobs”