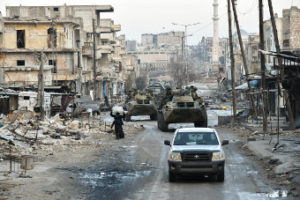 In 1973, Hafez Al-Assad was the president of Syria. Between that year and 1982, the regime conducted a systematic terror campaign against the opposition, which culminated with the slaughter of up to 40,000 people after the rebellion of the city of Hama. Al-Assad remained in power until 2000, when he was succeeded by his son, Bashar , the current Syrian leader. During all those years, outrage and international criticism of the regime always ended in many words and little action.

Now we face a difficult situation. In the six years of civil confrontation, more than 250,000 have been killed, and in excess of 11 million others have been forced from their homes, according to the BBC.

I have had the opportunity to travel several times to Damascus and the silence of the West against the previous excesses of the Al Assad regime were very quickly explained walking down the streets. The secularization of the Syrian society has always been seen as a positive that somehow made the West ignore the oppression and lack of freedom.

Russia, China and Iran support the regime of Bashar Al-Assad. Russia’s position is strategic. It has committed investments in the country exceeding $20 billion and is the largest supplier of military equipment to the country.

The support from Iran is political, as Syria has been a traditional ally in its policy in the Middle East against Israel, as well as financing Hamas or Hezbollah.
But why is China supporting the Syrian regime and threatening to veto UN resolutions? It has no meaningful business interests, political connections or obvious ties with the Syrian regime. What China is probably thinking is that an attack on Syria could have a contagion effect on the rest of the MENA region. China has invested more than $200 billion in recent years in acquisitions of natural resource reserves, over 60% of that amount in Africa and the Middle East. It seems for China it is no time to support regime change in any country, and its alliance with Russia in foreign policy is interlinked to this issue.

An attack on Syria, for the United States, France, United Kingdom and their allies is a difficult case of “damned if you do, damned if you don’t”.
On the strategic side, it is wasp nest, where it is not clear whether it is worth supporting an allegedly jihadist opposition, the risk of strengthening ISIS, while at the same time it is difficult not to act against a regime that uses chemical weapons on the civil population.
It is a risk of a similar conflict to Iraq when both sides in the Syria war can have negative implications for Western interests, human rights and democracy. It has become a choice of “lesser evil” in geopolitics, an issue explained in the excellent book of the same title by Michael Ignatieff.
It is not about oil. Syria produces around 50,000 barrels per day of oil and at the peak of 2011, it produced only 350,000 barrels/day. This compares with 2.8 million barrels per day in Iraq. Syria, therefore, is irrelevant in terms of production or economic output. At $65 billion GDP, it is truly a small economy.
On the economic side, regime change in Syria is not a “profit” for the West as some imply. Therefore it becomes solely a humanitarian decision. And a difficult one due to the nature of both sides of the conflict.
Regarding the risk of supply in the oil markets, it is very low. OPEC spare capacity is at a comfortable level of 2.5 million barrels/day, crude oil inventories in the OECD are above five-year highs and the US is on its path to full energy independence by 2019. There is no shortage of oil in any part of the system.
The cost of an attack on Syria, estimated at 13 million US dollars a day, climbing to about 120 million a week, with another 800 million dollars to establish exclusion zones according to different sources. The U.S. missile strikes on an Assad regime air base in Syria last week cost the Pentagon around $93 million. Even using these figures, the cost is small compared to the risks to world safety and security.
But the key is the humanitarian crisis.
The risk of inaction in Syria is very high, as terror spreads all over the OECD and discontent rises in the MENA region, while refugees figures climb every week.

As Kenneth Ross explains “Assad’s slaughter of civilians has also created millions of refugees, straining Syria’s immediate neighbors and destabilizing the European Union. Just as Obama found it difficult to ignore Assad’s slaughter, so will Trump. And if he wants to succeed where Obama failed, he will need to get tough with Putin. If he does not, then he may face a situation in which Assad’s atrocities continue to attract the extremist response that Trump says is his first priority to subdue”.

The solution must come from an agreement between the US and Russia, by which regime change does not become a worse outcome, but a peaceful solution with security at the top of the agenda and the fight against ISIS as the second factor. A humanitarian agreement with Russia and China must ensure that the Alawites and Sunnis can find common ground even if the country is divided into two parts.
The agreement must support a return of Syrians to their homes, and for that, the European Union must take leadership and support a solution that is beneficial for the Syrian people. Syrians do not want to be refugees, they want to return to their homes and make their country thrive. Massive immigration to Europe is not the solution, neither is letting the country become a battlefield.
So far the position of the US in previous administrations -and the EU’s- has been to look at the other side and wait for things to calm down on their own. It has been a disaster for millions of women, men and children, and triggered numerous terrorist attacks within Europe.
There are many risks from an action in Syria. The diplomatic efforts to put together a joint solution are extremely complicated. But the risk of inaction is unacceptable.

Daniel Lacalle is a PhD in Economics, fund manager and author of Life In The Financial Markets, The Energy World Is Flat (Wiley) and Escape from the Central Bank Trap (BEP).