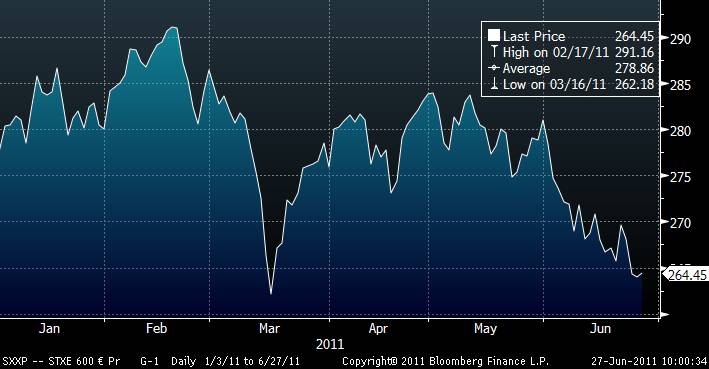 (Extract from an interview with me published in the Spanish press on June 20th, 2011)

How do you see the situation in Europe?

Complicated. On the one hand, Europe has a powerful engine, Germany and the Nordic countries, and sometimes we forget that this engine has the same GDP as China.However, industrial demand from the rest of Europe is deteriorating, and countries have not used the crisis to reduce debt dramatically.

A strong euro, driven by the European engine does not help, and differences between countries have increased. A strong euro means that the over-indebted economies, which are also big exporters, become less competitive.

In my opinion, the estimates of GDP, especially for 2012, are still very high and the estimated deficit levels are relatively optimistic in the peripheral countries. Italy could be a negative surprise, but this crisis can also be a great opportunity to eliminate the weight of the low productivity and high debt  sectors (construction, civil works) and support high-productivity sectors (technology, energy, services) that have been behaving really well under the circumstances.

What can happen if finally Greece has to restructure its debt?

So far the European crisis has been suffered by citizens, equity investors and businesses, but not by the bondholders. This paradox is curious. Europe has an entire economic and financial system that is supported by the fallacy that sovereign debt has no risk. This affects everyone from private investors to governments (local and state) to banks, their investment criteria and their perception of risk, and has generated a disproportionate percentage of sovereign bonds in portfolios. The CDS widening has been perceived as an opportunity to buy “no-risk assets but with high return”, not as a warning sign.

Going back to the Greek debt, to keep bonds as if nothing was happening, when these are already discounting a “default”, only prolongs the agony of a story whose end can only be to restructure. Once the debt is restructured in a proper way, it will be the time to see the beginning of the recovery in Europe and the peripheral countries. It will likely be a tough process and austerity plans will be much more demanding than current estimates, but it will also be the beginning of the solution, because the new governments that will manage Europe between 2013-2015 will no longer have the same vision of the problem of debt which so far has been to “hold on and wait for the issue to solve itself.”.

If it were in your hand … bail-out or restructuring?

Restructuring always, in an orderly manner and agreed with the financial institutions. Bailouts only encourage bad government behaviour , because there is no penalty for poor managers. Citizens end up paying anyway through higher taxes and worse working conditions because, as we have seen with Greece, that received a massive bailout already two years ago, a few months later the economy is in the same same poor situation, if not worse.

And Spain, is it better than the market thinks or, as some say, the situation is worse?

The big question is the debt of the regional communities and the State’s ability to join community after community to solve the debt problem and tackle unnecessary spending. Investors do not know exactly what the real indebtedness of the state is, and how much of all the enormous “receivable” items are simply bad debt and will never be paid.

Spain today is a bit better than the market thinks, and has positively surprised, because high productivity sectors of the economy have pushed in a very difficult environment, but that process can slow down or stop short if the real debt of the country is much higher, and deeper and more drastic reforms are not implemented because of a period of prolonged political uncertainty, because investment will stop.

What will we see in the markets short term?

The market discounts a very optimistic scenario for corporate earnings in Europe for the following two years, and especially a scenario of extremely optimistic cash-flow generation. EPS momentum is very weak. Consensus should review not only their earnings estimates, but target prices, because in some cases the latter ones are simply amazing.

A market correction that lowers the real PE (the revised one, not the current one) of the market to more reasonable levels will be a very attractive opportunity to buy, considering that the next cycle will probably be longer in duration (if countries do the right thing about debt) and less aggressive than the 2009-2010 one. The mistake, in my opinion is to seek refuge in index heavy weights or betting on companies that pay optical high dividends, when those are financed with debt.

Given that interest rates will not be low forever, it still makes sense to stick to well-capitalized stocks, growth companies that generate superior returns in the bottom of the cycle, and focus on high-productivity sectors.