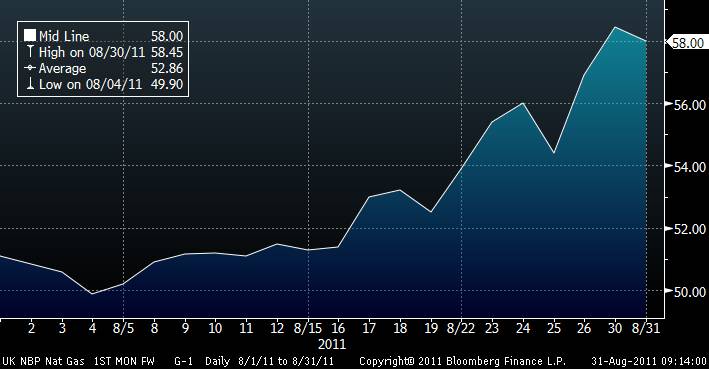 UK natural gas prices are very strong this month, with 1-month forward up 16.3%. The system continues to remain tight due to volatility in Norwegian flows with the ongoing maintenance season as well as weak inflows from LNG terminals. Moreover, maintenance at Qatar LNG and theNorth Sea also help the prices.

Qatargas are taking their 3 largest LNG trains down for 2 weeks each between September and mid November. Will disrupt UK LNG supplies, which are nearly all uncontracted from Qatar, at the same time as Statoil was putting the Troll field (31BCM per annum) into maintenance through September (3 to 10 days).
The key implication for the market has been a massive rally in the stocks most exposed to electricity prices in the UK, as power is driven by gas at the margin. As such, Drax and International Power have seen a re-rating as clean dark spreads have shot to 18 month highs.High UK Gas prices are also very positive for North Sea producers, from Centrica to smaller E&Ps including Premier or Tullow. But most importantly, high UK gas prices mean a very strong environment for LNG companies, that can sell cargoes anywhere in the world at the highest price. BG Group, Shell are expected to contiinue to generate record profits on LNG trading and achieving LNG prices that range from $9/MMBTU in UK to $12/MMBTU in Asia.

The final clear implication is that rocketing gas prices in Europe obliterate the possibilities of Euro consumers to achieve a positive negotiaion of their oil-linked contracts with Gazprom and Statoil. As spot gas prices shoot above the long term gas contracted price (difference now is barely $0.5/MMBTU) it is unlikely to see a benevolent attitude from producers to reduce the price of the long-term contract barely a couple of months ahead of winter.