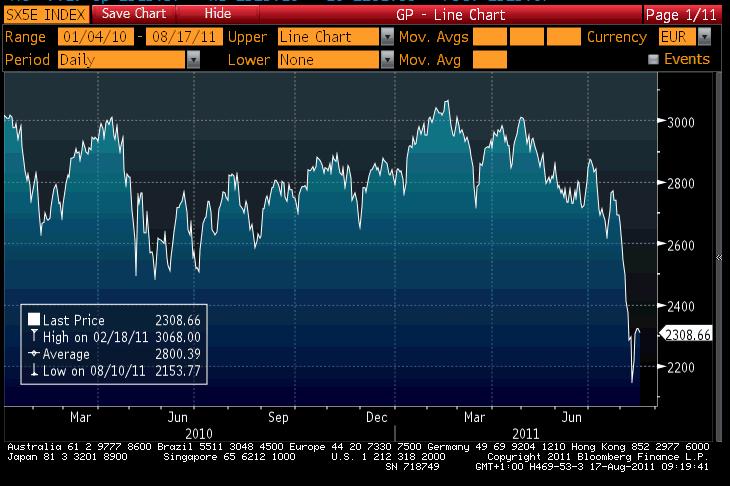 Beware of those that see the fall in the stock market this August as an unjustified anomaly and the rise in the past days as “a return to normal”.

We have heard all sorts of explanations for the decline in stocks except one that is coincidentally the most important and most painful:

Between the 1st and the 11th of August, according to Merrill Lynch and Goldman Sachs, we saw a systematic sale of $25 billion in stocks. Of that total, $16.5 billion were not evil hedge funds, or robotic machines or high frequency traders, but pension funds and institutions: the ‘Long Onlys’, the long-term guys. Goodbye.

Now our beloved regulators decide to ban short selling. Congratulations. Let’s put the blame for the bad restaurant food on the customer . We do not learn. We are repeating 2008 step by step. That year Europe also banned short-selling, and after a rise of 7%, it led to a collapse of 30%. Because that is when sales really start. Hedge Funds provide liquidity and short-selling is for many market participants the only way of adjusting risk on their long positions. So long positions are not added when investors cannot mitigate the risks with shorts. Simple.

If the fundamentals of the economy are not sound governments can do what they want, but intervention cannot prevent the stock market from falling. Since they can’t ban investors from selling their stocks, they look for “other measures” to generate calm, measures that create greater panic later.

The interventionist measures, from mass-buying Italian or Spanish bonds, to QE1-2, to the release of IEA crude inventories or banning short-selling, cause the same effect as shooting heroin to a drug addict. A temporary high followed by a bigger fall.

Governments are obsessed with controlling the movement of the market, either through intervention on bonds, stock markets, laws or taxes. And governments desperately want to see asset appreciation. Why? Because a huge part of private debt comes at risk if the listed securities fall by 30-40% and this would generate a new problem in the balance of “non performing loans” of financial institutions. The same institutions that governments desperately need to refinance their debt snowball.

But the effect of these injections of more debt in the economy are diminishing because the real problem, the system’s debt and low growth, increases and no government is interested in implementing measures to encourage enterprise creation and growth, because they are too long-term, while short term spending programs are more effective when one has the forthcoming elections as the only horizon.

In a sick economy, solutions like these that are just giving alcohol to the drunk do not help, but also the immediate rush effect is dissipated faster and faster because cirrhosis is getting worse.

The future is not what it used to be, as the great composer Jim Steinman said. That’s the problem. What we have been saying in this column for two years. The forecasts of GDP in the U.S., and the Eurozone in particular, are inflated.

France published a zero GDP growth in the second quarter, Germany +0.1% (vs +0.5% expected), Greece a contraction of no less than 6.9%, Netherlands flat, Spain is on the path to ‘zero growth’, Italy as well, and the list goes on. Several banks have had to revise their estimates of GDP growth for the Euro-zone in the second half of 2011 to +0.1% (from +0.4% previously).

It is a slow but inexorable drain that leads to a conclusion that is very difficult to explain politically after an increase in debt and public spending “to reactivate the economy” of 6-7% annually, 14% annually in the U.S.. Zero growth and stagflation.

It is surprising that for 2012 we still expect GDP growth in the Euro area of +1.1% to +1.6%. And this is impossible in an environment in which the rising debt is choking the economy and in which governments have to impose much more aggressive cost cutting measures and austerity plans.

How do we repay the debt without growth?

As the Italian opposition leader, Bersani, told Berlusconi when the latter blamed speculators for the stock market nosedive: “It is not speculation. Investors are asking something completely legitimate: how will we repay our debt if this country is unable to grow? “

The problem of constant negative revisions of growth estimates would not be such if countries had not wasted so much money injecting useless stimulus funds into the economy to create more debt and no improvement in GDP. This is the Debt Saturation Model.

When the economy is sick, it is wise to invest selectively and appropriately in areas of high productivity to generate a positive GDP effect, but this effect decreases rapidly as countries abuse of the formula. And boy has it been abused. According to Roubini, 78% of money spent on the so-called stimulus packages implemented in Europe has not produced any improvement in GDP. More importantly, the vast majority of that money has been wasted in low productivity areas, ghost airports, unused infrastructures, subsidising the automotive, construction and cinema industries, let alone to rescue bankrupt countries. Like a heavily geared company that invests its meagre cash flows in low ROIC businesses, the debt hole grows.

Countries in Europe have created an enormous debt burden with no GDP boost to help pay for it, so the solvency of the system suffers because it does not generate revenue for the state or growth.

And here’s why the stock market nosedives. If GDP is stagnant, debt cannot be repaid, leverage goes up, and austerity measures will be more severe, which in turn delays the recovery even further. And stocks values ​​fall because the equity risk premium rises.

Intervention doesn’t work. Didn’t work. And will not work. But for those still tempted to do it again, this time, unlike in 2007, the weapons of States to “intervene” markets are fewer and weaker. Then, interest rates were 5% (now close to zero), the economy was still growing (not anymore) and the debt was much lower (Spain, France, Italy were in surplus). 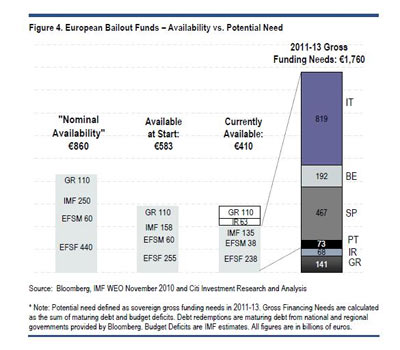 While the European Union was struggling to extinguish the fire of Greek bankruptcy and the debt crisis of the peripheral countries, the multiplying effect of risk was in motion . In fact, by troubleshooting debt with more debt (heroin to the addict) and convincing themselves that their debt to GDP was not as high as the U.S. one, governments have accelerated the evaporation of liquidity available for the real economy in the banking system . That is, while the cake of GDP was reduced and the burden of debt grew, Europe went from a solvency problem to a possible liquidity problem. By focusing on State debt and feeding the credit monster, governments have virtually wiped-out small businesses and mid sized enterprises.

If we also note that European banks have in most cases more than 100% of their core capital in sovereign debt, then the risk in the balance sheet of banks is that, unless countries take urgent measures to reduce absolute total debt, banks will have to take more provisions for sovereign risk and liquidity available to the system and the real economy will be even lower.

This multiplying effect of sovereign risk is passed to companies, their financing costs and therefore, stock market valuation, because the average cost of capital (WACC) rises.

Does anyone remember that between November 2008 and March 2009 some very solid single A rated and large companies had to refinance their debt at 320-360 basis points above mid-swaps due to the lack of liquidity in the system caused by the huge ball of sovereign debt?

If 100% of Societe Generale’s “core capital” is sovereign debt and for any reason there was a new State problem of liquidity, it would have an immediate impact on the real economy (“shrink lending”) and the financing of French companies. In Italy, UniCredit has 121%, in Intesa 121% in Spain between 76% and 120% … and that’s assuming that all urgent refinancing needs are covered. European states have in excess of €250 billion short to medium term maturities.

So the cake of GDP is shrinking, the snowball of debt is rising and the financial system is draining its liquidity. Add lack of confidence and the cocktail is explosive. European banks have deposited €120bn in the ECB this month,  the interbank market is drying up and that could be a sign that banks don’t trust each other.

We must curtail the spiral of debt

In addition, the European Central Bank checkbook is not as wide and in any case, such checks are going to be paid by the real economy in cuts and taxes. In July, the Spanish banks increased the use of credit lines of the ECB by 10% to € 52 billion, the Italian banking increased by 95% to € 80 billion, France followed suit in € 2.3 billion. The cake is reduced and the ability to stop fires is diminishing.

We can blame whoever we want for the stock market reactions, but to the recent comments blaming speculators I would say:

– Who is more of a speculator than a government which provides estimates of GDP and deficit that are not going to be achieved?

– Who is more of a speculator than a government that wastes the future revenues of an entire generation on short-term-no-growth spending?. As an example, every new child in Spain, Portugal or Greece is born with €30,000 (average) of debt.

– Who can demand long term investment commitment when all policy decisions taken are for the short term?

– How will governments solve the snowball of debt in Europe when many political parties, unions and social agents claim that more spending is needed, and therefore more debt?

A year ago I commented a few points that I think are worth remembering today, because they are relevant again:

“The market is wary of the macroeconomic environment, following continuous downward revisions of growth forecasts and increases of the deficit of the Euro-zone countries, yet without a clear environment that promotes economic growth. On the other hand, the market does not trust the estimates of earnings and balance sheet structure of companies, however big or strong they are. ”

In Europe, in the second quarter, over 48% of companies have published in-line or lower results than expected, but more important is that the majority (80%) has revised down or avoided to comment on future prospects. 35% have cut dividends. And the worst, 86% of companies that have reported have not improved their debt using free cash. Only through divestments. So if the problem of sovereign debt spreads on banks, companies can suffer another black winter of liquidity as in 2008.

The current market is “a bad investment and a good bet” . Investors have very little visibility for long-term investment decisions . And that increases the volatility and equity risk premium.

Euro Crisis, CDS, The Market Doesn’t Attack. It Defends Itself.

1 thought on “Europe: Week Of Panic, Decade Of Decadence, Years Of Abstinence”