A few thoughts on Oil and Gas prices

A) Oil demand is still above supply by c400kbpd but this could be short-lived if an OECD slowdown brings GDP estimates down by 2%. Given OPEC spare capacity is still at 5mmbpd and inventories in the IEA countries are in the upper range of the 2006-2010 average level, there is no small risk of entering an environment of oversupply if OPEC countries continue cheating on quotas (producing 27.5mmbpd versus 24.5mmbpd quota). 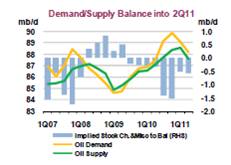 B) New OPEC President, Iranian Rostam Qasemi is beyond hawkish towards the West. He was the commander of Iran’s Revolutionary Guard and one of Ahmadinejad’s most active advisors.
C) Venezuela surpassing Saudi Arabia in proven oil reserves has been ignored by the media, but has very significant implications on the balance of power between “hawks” (Iran, Venezuela, and Angola to a certain extent) and “doves” (Saudi Arabia, EUA, Kuwait). This, added to an Iranian president, means more power to the hawks not only in the decision making, but also in the quota split (as quotas are based on proven reserves, and Venezuela has surpassed Saudi Arabia).
D) Kuwait, traditionally supportive of benign oil pricing, is already giving messages of “supporting the current price”. This means that either their budget balance requires a higher price than we think ($75/bbl) or that they start to acknowledge that the downside could be more significant and that prices could overshoot on the downside as they did in 2008. 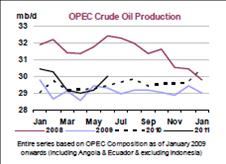 D) Reduction in net length across the petroleum complex has been aggressive and not surprising in view of recent macro developments. The change in the crude position reflected a sharp reduction in Managed Money net length (~23k contracts) BUT overall positioning remains towards the upper end of the historical ranges.
I think oil (Brent) settles below $100/bbl in September (putting at risk the budget balance of Iran, Venezuela, Russia and Angola, who all need $90-95/bbl to balance), and this might trigger a supply response, but only then.
Meanwhile, weakness in WTI will continue (the gap between Brent and WTI is at $21/bbl), and the lower WTI goes, we can see a risk to the hedging availability of liquid-rich companies in the US.