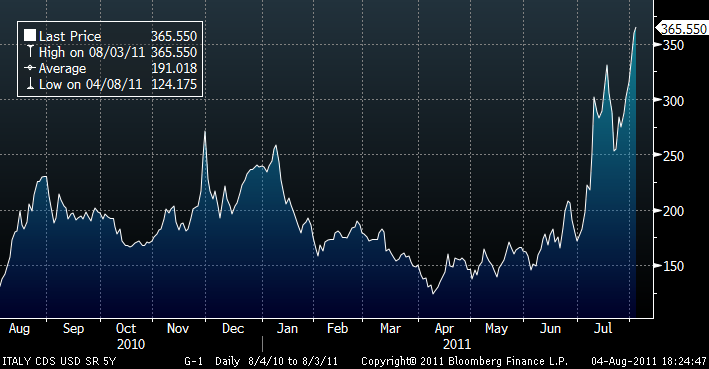 Deja Vu? As in 2008, governments in Southern Europe are blaming everyone except themselves. “The sovereign risk premium goes up because of the attack of speculators.”

I look forward to the day when I hear “risk premium rises because institutions can no longer absorb more debt than they already have”.

One quick glance at Europe’s financial institutions and the numbers are staggering. SocGen’s entire core capital is comprised of Euro sovereign bonds, for Unicredit, 121%, Intesa 121%. In Spain, BBVA, 193%, SAN 76%. And all this is before another $200bn of Euro debt refinancing requirements.

As in 2008, the blame now is placed among hedge funds . And wait, soon we will see European governments or the ECB making interventionist decisions. Ban Credit Default Swaps. Or ignore rating agencies. Kill the dog to get rid of the flees. Blame the customer for the restaurant food. Does anyone remember what happened in 2008 when Europe banned short positions? The market plummeted another 30%. Because that is when selling REALLY starts. So far it’s only protection seeking. Trust me.

The risk premium does not rise because of any attack. It rises because the holders of government bonds, who see the risk of economic stagnation and increasing debt, can not sell their holdings and seek protection (hence the CDS widening).

96% of the market for sovereign CDS (credit default swaps or the cost of insurance against a default) is absorbed by the European largest institutions, most of them country “flagships” or semi-state-owned entities, who are flooded with  €250 billion of European sovereign bonds in their books. These entities, from DB to SocGen, the Spaniards or the Italians, seek protection and can not sell because of low liquidity, there are no buyers, and in any case they will receive the call to participate in the the next auction of debt. With a problem. The purchasing power is reduced by saturation, but also due to the increasingly stringent requirements of core reserves… While at the same time refinancing needs of indebted states are increasing. According to JP Morgan, Italy will have liquidity problems in September, and Spain in March 2012. 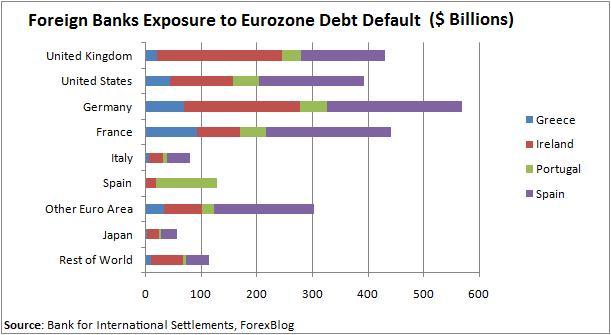 Hedge funds don’t attack. We would be happy to invest against the rise of the risk premium if it were not justified . But that is not the case. The trend is clear and normal. It is re-evaluating sovereign risk. A sovereign debt that for decades we have been told had no risk. As the swindle of “house prices never go down.”The sovereign debt crisis has many similarities with the housing bubble. An “over-priced” asset (in this case sovereign debt, regarded as an unwarranted risk-free asset), a brutal increase in inventory (all countries issuing, using pension funds, domestic banks and social security to buy more debt) and a bubble burst, when borrowing capacity is maximized. At the same time, the pool of capital allowed to invest in sovereign debt evaporates as the CDS rises and the cost of borrow rockets, because most fixed income investors cannot take the risk and volatility implied by the high yield sovereigns.

The end in this case, as in the sub-prime crisis (read “The Big Short”) is the same. A devaluation of the underlying asset (sovereign debt) and an appreciation of its risk factor according to real actual demand and true likelihood of repayment.

The phases are typical: “shock, anger, denial, acceptance”. First, shock (“but our financial system is the strongest in the world”), then anger (“Spain/Portugal/Italy is not Greece”), then denial (“the premium rises due to external causes/US debt-ceiling deal/speculation”), and finally acceptance . And that’s where the solution begins. Countries will be less “easy” about leveraging up as debt will be more expensive, the states will learn not to squander and the growth-through-debt policy, ie, fund the privileges acquired by a decadent society with the income of future generations, will be over. And it will come.
It’s funny that we care so much about the cost of debt of Spain or Italy and whether the 10 year bond stands at 6.3% or 6.2%. We are only concerned because the governments want to return to the Debt-for-all-party and pay less . If the state model was to build and maintain a surplus, these moves would not worry so much.We forget also that the free-debt oasis is a recent invention. Less than twenty years ago South European states financed themselves at twice those rates, but then they had growing economies, were not indebted to 120% of GDP, and unemployment rates were assumable, not structural.
The following graph shows the % of peripheral public debt in the portfolios of domestic (resident) and foreign (non-resident) banks.

Countries and institutions thought the CDS market, $60 trillion, was more than enough to ensure credit risk. Why? Because they only thought there was risk in corporate bonds and, therefore, the sovereign debt market would not need large default insurance contracts. That was OK until countries started to issue debt like crazy, creating a huge bubble of bonds that are almost impossible to insure, while at the same time GDP growth stalled and unemployment rose. And who takes the risk to insure this debt while state banks and credit institutions are struggling to remove themselves of their debt hole?

For those who blame the wicked capitalists, do not forget that over 50% of the Spanish financial system is public, the saving banks, and in Italy, Portugal and Greece the percentage is also in the region of 50%.But let us review the elements that make the snowball grow, despite the “messages” to calm the market, because actions, I must say, few. In Spain, Italy and the peripheral economies they have not implemented many of the measures announced with great fanfare.1) The precedent of “stress tests” in which banks have taken significant haircuts in the valuation of their assets, has proven to be self-indulgent and inadequate, but also has shown to the eyes of the public the very low core capital of the institutions, particularly the semi-state-owned ones.

2) The rating downgrades, which no one in any government expected, are a reality. The agencies have taken two years to reflect on their “ratings” what the market already knew. The economic fragility of the indebted countries. And its is not the “evil doings of Anglo-Saxon agencies attacking the poor European countries with imperialist tactics” as some politicians say. It is rather the opposite. Rating agencies have been monstrously generous in the past.

3) The successive bailouts of Greece and Ireland have left the financial system without “gunpowder” to address similar risks in other countries, but also these bailouts have weakened the balance sheets of the entities that hold the bonds.

4) The optimistic estimates of growth and deficit reduction . Each month we see new revised estimates of GDP in 2012. And they are too optimistic. The IMF indicates that Spain, Portugal, Italy and Greece will not meet the government forecasts of deficit for 2014. Spain will be at -3.9%, versus a target of -2.14%, as growth will probably be very low. If GDP is not growing, unemployment rises, funding costs rocket and debt goes up.But what is more important, without measures to incentivize  job creation and support entrepeneurs, government revenues will be eaten by interest charges and costs that do not generate any return (GDP). Some call these costs “social” but they are just borrowing from our children’s future income.

While governments gave themselves pats on the back on the success of the last auction of sovereign debt, no one wrote the headline “the latest debt auctions have only been covered by domestic institutions.” Foreign entities were flying away from peripheral sovereign debt (see graph above, sorry it’s in Spanish). And while Southern European leaders took advantage of their last months in office before an election debacle to sink the economy of their regions by increasing the debt by 43% amid economic pre-stagnation, the states were dangerously close to a level of risk country that is not acceptable for any investor. Today, the premium  that Spanish ten year bonds have to offer for investors to buy them instead of German bonds is up to 6.2%. Italian one is 5.8%. If Spain or Italy reach the 7% level, many institutions simply will not be able to buy them for being too risky. The pie of available capital for investment is not only smaller and with more countries stalking it, but some countries will simply be unable to access a part of it. 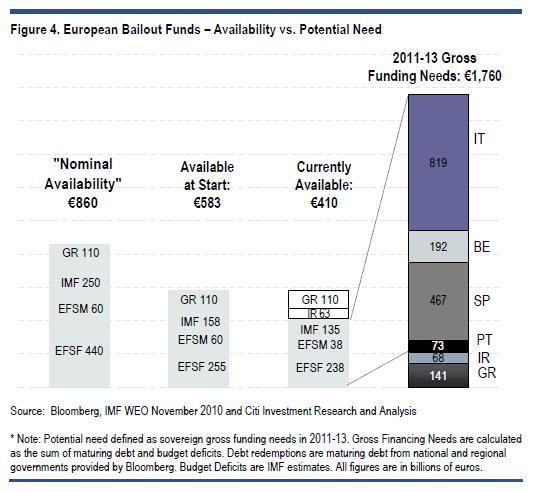 The warning signs have been there since 2008 . Many of us have said this in writing. Meanwhile, the system has continued to sink into debt at a more expensive interest rate each time, while no one cared that almost 60% of peripheral countries’ state revenues are used to pay interest expenses. This year, the cash deficit reached by Spain will be 14.5 billion euros. The balance of income over expenditure is negative before paying interests.

And now governments demand cheaper and more credit when they are borrowing money to cover interests only. No capital. The result is that after the cuts already announced, peripheral countries will need a spending reduction of 30% to cover the cash deficit and interest. “Blame it on the wicked investors” who have the fastidious desire to recover their investment and request an interest that is appropriate to the risk. Outrageous.

The market, that evil entity that causes so much hatred among interventionists, reacts because it has been lied to. And reacts by selling equities and seeking protection on bonds.

Do the interventionist European States want to get rid of the alleged “dictatorship of the markets” that they claim is the problem? Perfect. Do not allow leaders to borrow again like crazy. No more deficit and they will not have to worry whether the blame is of hedge funds , Merkel, Fitch or the new U2 tour.

PS: Pier Luigi Bersani, Italy’s opposition leader said to Berlusconi on Wednesday: “it’s not speculation, it’s about investors and our creditors that don’t trust us any longer”. “Investors are asking a legitimate question… how can these guys pay their debt if they don’t grow”