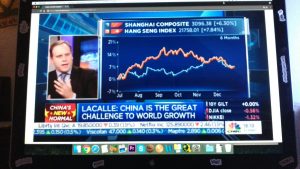 The China housing bubble was encouraged directly by the authorities. In 2014 the Chinese Central Bank massively reduced restrictions on credit and interest rates. At the same time, the Securities Regulator removed restrictions on real estate developers to raise capital and sell bonds and stocks, sending the market to price increases of 20% a year.

The answer was immediate. In October 2016, the 196 Chinese listed real estate developers more than doubled their debt, from 1.3 trillion Yuan in 2013 to around 3.3 trillion Yuan. Household debt soared from 31% to 41.5% of GDP.  Anyone can see that falling prices and a domino bankruptcies would have a huge impact on secondary markets and large cities. It would be virtually impossible to control the impact.

That said, Chinese debt is mainly denominated in local currency and held in local banks, which leads us to think that the contagion effect to the rest of the world could be low, financially, but not in terms of growth and inflation expectations.

That the Yuan has depreciated against the dollar so much and Chinese exports have fallen shows another of the great problems of the Chinese economy, its low competitiveness and poor added value.

China’s problem is no longer debatable. The brutal increase in debt in 2016 coincides with a strong dollar and a US administration aimed at breaking the huge trade benefit that China has with the US.

Like all bubbles, which are always generated in assets that are widely considered safe or very low risk. China’s one has been created under the religious belief that the government can control everything because it is an intervened economy. The Chinese risk is not reduced because it has not ‘exploded’ in 2015 or 2016, it is increasing.