This article was published in El Confidencial on January 26th, 2013 and in English in The Commentator

How do we get out of a debt problem and stagnation that only worsened with stimulus?. The concerns about an all-out global currency war, triggered by Japan’s latest move, was discussed by the G-20 and in Davos as central banks become increasingly politicized and intervened.

Japan’s prime minister Mr. Abe, said that with the dollar above ¥85, “companies that haven’t been paying taxes until now can pay taxes” because a weaker yen lifts profit. Really? Or is it a case of exporting at no profit because planning was made at an unsustainable yen exchange?.

Devaluation. Great idea. It ‘improves’ competitiveness, debt ‘disappears’ as the currency in which it is denominated loses value, and everything starts again. Yes? Well, no. Because the fundamentals of the economy do not change, and we have sunk the credibility of governments and the financial system. This pyramid scheme does not work without confidence.

As a friend of mine at the Bank of Japan once said “it’s true it’s not showing much effect, but we don’t know what else to do”. This, while the Asian central bank posted a whopping ¥233 Billion loss as  its soaring balance sheet hit a record ¥156 Trillion ($1.7 trillion).

We are in a period that will be studied in the future in business schools because of the obstinacy of repeating the same formulas that created the crisis over and over.
According to an analysis by RBS, in 2013 most Asian and OECD central banks will engage in some form of aggressive currency manipulation scheme.

In this race to zero, once you pop, there is no stop. In 2013 it is estimated (by UBS) that central banks will expand their balance by 15%… Or $1.5 trillion. It did not work … let’s repeat it!.From defeat to defeat until the final debacle.

First, low rates, disproportionate spending in high-risk assets with poor results, impoverishment and useless stimulus plans. Consequence is more debt and low productivity economies. The solution, according to our governments? Repeat it. “Stimulate to combat unemployment.”

An unquestionable ‘success’. In the US five trillion dollars of stimulus to reduce unemployment by an imperceptible amount, with an average bill of ‘only’ $2.5 million of additional debt for every job created … even if we accepted the ridiculous premise that all jobs gained were a result of stimulus and monetary policy (an implausible starting point, because most of the job creation is coming from the oil sector). In the UK, after stimulus, Olympics  devaluation and zero rates, the country faces a triple-dip recession … and stagnant unemployment. The solution? Repeat it!.

To “repeat” such a “successful” formula, governments have to steal from the pocket of savers: taxes, depreciation and manipulation of the cost of money. And, of course, unemployment doesn’t fall… certainly not because of government intervention. Textbook financial repression version 2013.

Repatriation of gold and “competitive” devaluations

Central banks devaluing currencies to “improve competitiveness and lower unemployment”. Are we sure? Last week we discussed Germany’s gold repatriation decision and now we read about similar decisions in other countries like India, Azerbaijan … even Switzerland debates the possibility of repatriating their precious metal reserves. The Standard Bank physical gold index reached historical highs. Physical gold, not financial derivatives. An attempt to ring-fence value amidst financial uncertainty.

Repatriation of gold reserves is no accident, it’s not technical. It is part of the mistrust in a global monetary system that is out of control. Even a senior Chinese official said on Friday that the US should cut back on printing money if the world is to have confidence in the dollar.

One effect of this currency war is the pursuit by investors of yield at any cost to compensate for the fear of the loss of value of money. That is, less interest accepted for higher risk.

According to Bloomberg, the demand for junk bonds and debt of troubled countries has soared to levels of 2009 . Companies on the verge of bankruptcy issue bonds with demand exceeding supply by ten times

(“Junk Is King as $ 1 of Beef Debt Gets $ 10 of Bids”, Bloomberg).Spain has capitalized on this demand for bonds. Between the state and corporates, bond placements exceeded 42 billion euro in January. Is Spain on the recovery path? … or is this reallocation of global risk?, investors looking for a bit of yield?.

I think it’s great to take advantage of these euphoria and high demand periods … to avoid repeating past mistakes. But not if one takes the opportunity to borrow even more.

The overall bond bubble is magnified including so-called high-yield. Do you remember Michael Milken and Drexel? Repeat!.

It still amazes me to read that some people think that monetizing debt creates jobs.

Unemployment is reduced when economic activity recovers, when we see real private investment.When we establish a monetary bubble, the effect is counterproductive, because money is invested in short-term financial assets.

The risk-return of productive real economy investment is simply unaffordable compared to that of liquid financial products.

Central banks will penalize investors for being conservative. But these, in turn, do not put money to work for fifteen years, and less so in real assets, until they see a secure environment and growth opportunities. So money goes to the place that central banks are going to support until their final defeat: financial risk assets.

In the meantime, economic activity is contracting . That is why the velocity of money collapses. There is little trust in a system that represses and creates fake money. Inflation increases, even if it is disguised in official figures.

My readers will remember the “competitive devaluations” of Spain in the 90s, and their futility. Devaluation did not solve the structural problems of high deficits, soaring unemployment and debt … until the free money from EU funds appeared. After devaluations of over 20%, unemployment in Spain remained at over 21%, and deficits above 6% per annum. Prices soared.

Structural problems are not solved with bubbles . They are perpetuated and increased.Consequence 3: Japan, Germany and the U.S. competing for China

“Beggar-thy-neighbour policies would not be healthy”, as the Fed’s Charles Plosser said. The main risk of massive devaluation is impoverishment and stagnation, added to the fall of productive investment.

After thirty-two years of “economic experiment” in Japan, the country has achieved a ‘very social’ 300% debt to GDP and structural unemployment unchanged from 2004 levels.

This is why the Bank of Japan’s decision to raise its inflation target of 2% and buy 147 billion of assets per month is seen as very negative for European exports. It does not solve Japan’s problems and runs the risk of impoverishing others.

Europe competes with Japan trying to sell to China. A brutal devaluation of the yen means a drop in exports of the European Union to Asia. If we add the ongoing devaluation of the dollar, the effect is simple: the U.S. exports inflation, because 75% of global transactions are made in dollars. The currencies of emerging countries soar, commodities, especially energy, remain high and, therefore, global imbalances are exaggerated.What if the ECB and Europe do the same?

Surprisingly, the common view is that Europe should participate in this crazy war. We frequently hear that the Euro crisis is all Germany’s fault, who refuses to turn on the money printing machine. We hear things like “it’s criminal that Spain has 26% unemployment just because Germany doesn’t want more inflation”… As if we learnt nothing from the 90s’ competitive devaluations. It doesn’t work. Repeat.Yet monetary expansion in the EU and the ECB’s balance sheet is being carried out very quickly as we have seen in the chart above … we just do not see the euro devalued. Why?

Europe-Spain, Germany and Italy in particular- have improved their exports due to a policy of “internal devaluation”-reduce costs-wages- and selling at dollarized prices. This means that a large part of the recent years’ export success, up to 80% according to Goldman, comes from selling in dollars or equivalent.

Germany knows that the vast majority of transactions in euros are made ​​between EU countries. Therefore, to try to artificially devalue the common currency has the risk of being like a shot in their own foot. Inflation in the Euro-zone could spiral alarmingly. It has happened many times in the past. In the European Union offices in Westminster House they are well aware of this. I have often talked about it with MEPs but, unfortunately, there are a few who consider forcing inflation a “lesser evil” and that “it would not hurt to try.” 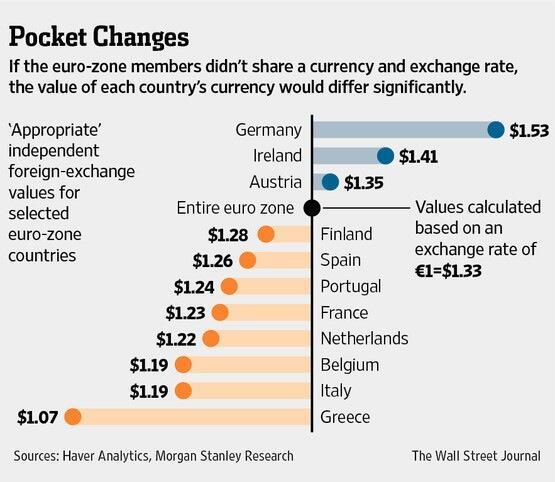 In Europe, banks have returned 137 billion of LTRO loans, but if we go into a devaluation spiral, the risk of lending to low productivity-high risk government sponsored plans increases. I fear that the European Central Bank will fall into the trap of aggressive monetary policies when the current appetite for debt is reduced.

Currency Wars had a very remote strategic sense when they were not global and concerted, only when there was:

– Confidence in the global political and financial system.

– Independent central banks stopped the printing machine after short periods.Nowadays none of those conditions apply. Unconventional policies are now commonplace. Raising the bet that ‘next year all will improve’ has led to massive loans creating a bubble in futures and derivatives that generates a systemic risk if there is a correction, which in turn makes it impossible to stop the printing machine, because the banking system collapses.

The central banks’ balance sheet is like the cockroach motel. What goes in does not come out. Central banks have stopped sterilizing  and now must continue to implement unconventional measures to sustain the perennial sovereign credit bubble driven by unsustainable spending.

How to profit from currency wars?

Know what is happening and that when it is completed it will be painful. When taking risks, be aware that the structural problems have not changed. And that they will not be solved with more debt and low interest rates.

Act accordingly. Short term?? Of course. Avoid sovereign risk, and focus on the corporate one that is where entities have done their homework. 50% of corporate deleveraging has already been carried out (acc to Goldman).In investment, more people have lost money by holding on to winning positions “a little more” than from bad analysis. Be disciplined, do not invest in semi-bankrupt firms that “go up a lot.” Take advantage now, precisely, to invest in quality. The “flight to junk” always ends badly.

A structural problem of debt and spending, lack of growth and de-industrialization is not solved with cheaper debt and devaluation. The solution is innovating and growing the high-productivity areas. That does not happen when we print money and manipulate interest rates. It encourages borrowing, mal-investment and maintains declining zombie sectors.

The solution is precisely what everyone seems to want to avoid: cleaning an exhausted system and replace low productivity sectors with technology and high productivity.

Don’t Get Mad, Get Even.

“Currency devaluation is merely a transfer of wealth from all of a nation’s citizens to politically favoured industries, usually export industries. It is no different from giving a subsidy to any domestic producer. The subsidy is paid by all the citizens of the subsidizing country, not by the foreigners who buy the subsidized good. They get a bargain.

Furthermore, devaluation does not make a nation more competitive. It does nothing to spur increased domestic saving or external capital investment, which lead to the increased application of capital per capita, the only sources of increased worker productivity and the only sources of increased real wages. Devaluation does not reveal the onerous, wealth-destroying effect of economic regulation, not does it reveal the true costs of the welfare state, which relies on high taxes to fund present consumption at the expense of future prosperity. What the state spends cannot be saved and invested, no matter how cheap the currency.” Patrick Barron (more here)

3 thoughts on “Why currency wars fail”