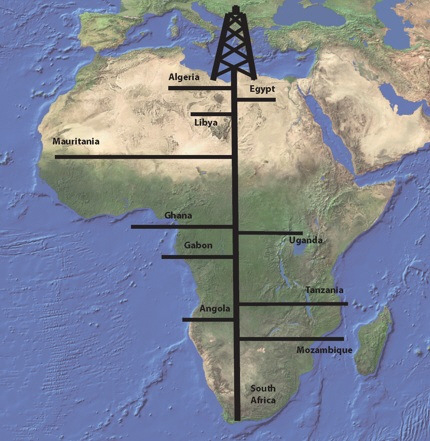 The oil world is preparing for a new capex super-cycle. In the past 14 years I hadn’t seen a building activity in rigs and seismic vessels as significant as this one. As the world seeks to reduce investment and reduce debt, the oil industry is expected to increase 15% its capex in E&P. And as for new equipment built, it might not reach the 1982 peak, but it’s getting close.

The oil world post-Macondo not only has not slowed down in activity, but every day we see more companies increase its drilling capacity. Three reasons:

a) The oil companies can not develop the recent discoveries fast enough.

b) The industry has finally realized that the era of cheap oil prices is over and we can not continue planning at $25/bbl.

c) Tightness in deep water rigs and equipment has increased as companies seek to accelerate the development of discovery in Brazil … and Africa.

The event that many companies expected (prices to come down and oil service costs plummeting after the moratorium in the Gulf of Mexico) has not occurred. And it has not happened because not only Petrobras is almost monopolizing the market by placing orders for oil rigs at breakneck speed to meet its development program in deepwater fields, but because independent companies are doing absolutely outstanding discoveries in Africa.

Africa overall has about 10% of proven reserves in the world. Not much. But new discoveries have increased the possibilities to advance in the basin of Guinea-Sierra Leone-Liberia-Ivory Coast and Madagascar, and Mozambique-Tanzania-Kenya, which is estimated to be as productive as Tupi in Brazil. There are three factors that differentiate Africa from other areas of the world:

b) Geological areas relatively close to the water and ports (so no need to build huge pipelines and infrastructure).

c) Oil outside the influence of OPEC (ex_Nigeria and Angola, of course).

Even the most sceptical would agree that the negative naysayers have had to reduce the estimated cost of development in areas like Uganda and Ghana and expand the reserve estimates (Wood Mac Kenzie has been a clear case of erring on the side of caution in their estimates). And this has been proven, as always, by the independents.

Both in Uganda and Sierra Leone, Liberia, Tanzania and Mozambique, independent explorers have shown that not only the accumulation of hydrocarbons was much higher than originally estimated, but the capacity and speed of development of these discoveries is better than initially expected. Over the past five years, the discoveries in Africa are proving to be of really attractive quality and strength.

Now, once that independents have tested these areas, the big oil companies are re-launching the African region programs with total investments estimated at over $150 billion in the next three years. From Kenya, which was almost forgotten by the industry, to Mozambique, including Madagascar, the geological structure is already estimated, by many companies as AFREN, to be very similar to Tupi in Brazil. In meetings with exploration companies since 2004 I have been following these discoveries and today I can say that all expectations have been exceeded, so the sceptics should at least give them the benefit of the doubt or to take a breath.

Anadarko’s CEO, Al Walker, estimates more than 1 billion barrels of oil equivalent in their recent discoveries in Africa. And BG just discovered the equivalent of 2 billion cubic feet of gas reserves in Tanzania.

Since 2001 there have been more than 15 billion barrels of oil equivalent discovered in non-OPEC Africa, and 2 billion of those barrels only in 2010. In 2015 it is expected that 20% of world production will come from Africa (ex-Nigeria). Cheap oil, of high quality, free of restrictions from OPEC and with lower administrative and political problems. No wonder that the U.S. considers Africa (ex-OPEP) as a strategic frontier in the war over natural resources.

Ophir provided higher-than-expected gas resources in Jodari in Tanzania (3.4tcf vs pre-drill estimate of 2.2tcf) de-risking concerns about the pace of gas discoveries needed for an LNG development.