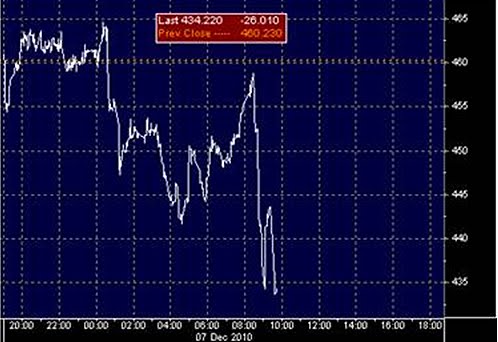 In May 2010, gas inventories in England were at a truly low level, with storage almost empty, at a level of 35%. The country decided not to take the opportunity of having gas prices at a minimum to fill storage for the winter. Why, You may ask yourselves. Two reasons. On one side, a group of scientists who had advised the ministry and the industry that “climate change would create one of the warmest winters of the last hundred years”. On the other, the view that would have “radically hot and dry” winter(The Guardian, July 2010) due to the effect of La Niña.

Additionally, the Uk decided to play “commodity trader”, and clung to the estimates of CERA (Cambridge Research) and Wood Mackenzie about a bubble of gas in Europe from 2010 to late 2012 . According to these estimates, the Qatari government was going to flood Europe with cheap liquefied natural gas, the Russians were going to get nervous and cut prices aggressively, and the Norwegians would have to sell below cost price. Even agreeing that the gas market has spare capacity, and I have written about it several times, is very imprudent to take a bet on prices to fall, not to secure supply, when the price can move dramatically depending of many factors.

Of course, today at 2 degrees below zero, the British gas system is in deficit of between 15 and 25 million cubic meters (see graph). Of course, the “scientists” were wrong by as much as 170% in their projections of climate, and thus gas consumption. Of course, gas producers have not foolishly flooded the market. And nothing happens here, no one said it had been wrong, while England and the continent are desperately trying to buy more gas …. 41% more expensive than three months ago. 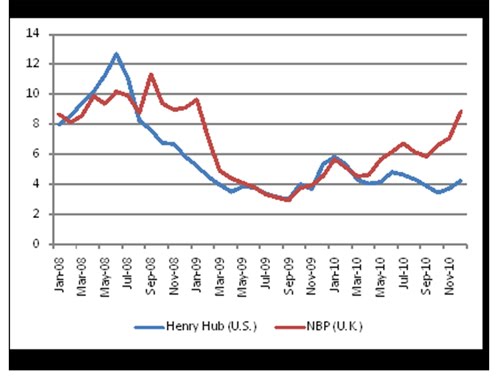 In Europe we have spent more than a year complaining about the oil-linked formula of long term gas contracts with Gazprom and Statoil. Of course, when gas has decoupled aggressively from oil, as gas demand growth has slowed down dramatically, we have seen governments and E.On-Ruhrgas, GDF-Suez ENI and others force the machine to renegotiate their contracts with major gas producers. Perfectly acceptable.

Anecdotally, I remember the CEO of Gazprom say in London that for eight years, when long-term oil-linked gas contracts were very competitive compared to spot gas, no one complained. And he said if it was not possible to renegotiate the contracts but with retroactive effect, ie, all they had lost between 2002 and 2008 subtracted from what buyers have lost between 2009 and 2010.

Well, now that they have renegotiated up to 20% of contracted volumes to be linked to the price of spot gas… Surprise. The spot price ($8.8/MMBTU) exceeds the long term, compared with the price of Gazprom ($7.8/MMBTU) and Statoil ($7.5/MMBTU). These things happen. And of course, solar and wind energy can not cover the difference in consumption, and the bill of the average consumers in the UK, for example, will rise by 20% when it would have only risen 9% if the measures had been taken to ensure supply and maintain the reserves filled in summer with gas prices 41% lower.

Of course, they forgot that the gas market is also global and is one of the most rapidly adjusted given supply is focused in very few countries. And the liquefied gas, LNG, and especially the spot part, which is still less than 12% of total gas, is sent to that market that pays the highest. Asia, in this case. So again, companies and politicians, instead of worrying about security of supply and proper planning, decided to play the market. A lesson to be learned by all European countries.

The Independent states that despite the low temperatures and having been a 346% wrong in their estimates of 2002 about the melting of the Arctic, global warming is a looming problem that will cause one million deaths in 2030. With this track-record of successes, I can not help but tremble.