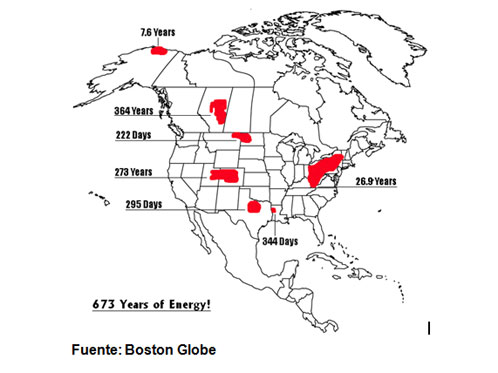 Imagine the following scenario. We are in 2020. China has captured 15% of world reserves of conventional oil and gas from its own resources and acquisitions in Africa and Latin America, Middle East and Russia control 60%, the U.S. controls 20% … and the EU? 1%. Nothing.

This is the geopolitical landscape that a good friend, geologist and energy expert who advises the U.S. administration, painted over breakfast in New York, commenting on the recent study by Sanford Bernstein on the electric car.

That is, 4.1 million electric cars (about 5,700 MW of load) will not only increase power consumption by a tiny fraction, but will not reduce oil consumption as the energy intensity of the process of network investment, re-industrialization and adaptation of the park ($14.8bn pa for 10 additional years) means increasing the consumption of oil and gas by almost a million barrels a day.

Some of my readers have rightly commented on the risk of energy policies that do not take into account the in-out cost (energy consumed per kilowatt hour generated). In the UK this has been particularly evident (see above graph showing the evolution of energy dependence in countries with strong “green policies”)

Do you know what is the solution? Interestingly, the Obama administration, that criticized the “drill, baby drill” messages sees only one way to mitigate the effect. Increase drilling permits (+75%!) And double-check the possibilities of “Shale Oil” with 143 drilling licenses in North Dakota, where there are more than 4,000 active wells, surpassing the record of 1981. 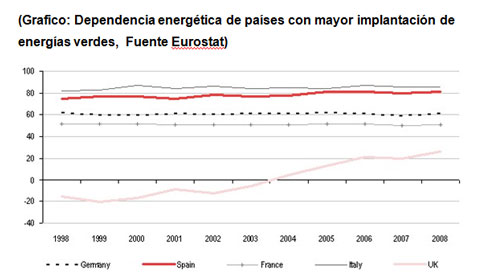 It is worth recalling that the concept of “Shale Oil” is not new (has been investigated since 1920) and until recently had been considered too expensive to be commercial … Until the price of oil stabilized at $80 a barrel. Besides, the horizontal extraction technology has seen a giant step in terms of cost and efficiency and the war for natural resources has accelerated. With more than $100 billion in oil and gas transactions worldwide, 39% more than in 2009, nobody can ignore new options to accumulate resources, and above all in the OECD.

The United States accounts for 72% of the world’s Shale Oil reserves. With an organic-mineral ratio of 1.5 to 5, similar to crude oil and about three times higher than coal, the challenge is to continue to explore and determine the commercial potential and the average lifting cost, estimated at c$10-15/barrel.

Shale Oil still has many unknowns. One of them is access to sufficient water to fracture the rock and the typical environmental restrictions. But it sums to potential reserves. And after the success of horizontal drilling technology in shale gas, no one should dismiss the possibilities.

In the Bakken formation, one of the most commented in the American press, which extends from Dakota to Montana, there could be an estimated 1.5 trillion boe of shale oil reserves. Around 600 years of abundant energy … if we get to perfect the technology to make production economical.

For now, the latest round of oil concessions in Bakken, Eagle Ford and Niobrara have attracted more than $72 billion of private investment. And taxes and costs so far are not low. There could be an estimated 400,000 barrels per day of production over the next five years.

Only five years ago many people dismissed shale gas saying that it was not economical below $6.5/MMBTU and would never be a real alternative to conventional gas. Today the shale gas revolution has taken gas prices (Henry Hub) to $4/MMBTU levels, and companies are still drilling and generate solid returns of 12-15% IRR without debt.

Now we see the revolution of shale gas reach Europe, starting in Poland, as we mentioned here. So beware of dismissing shale oil. Hess, Williams, PetroHawk, Noble, EOG and others are betting hard on it. At $83/barrel and with horizontal drilling technology improving every year, it is something worth bearing in mind.