Most of Repsol’s stake (shares amounting to 51%) in YPF was expropriated on April the 16th.

The expropriation comes as Argentina’s economy slumps despite official figures that seem attractive at first glance, GDP growing 8.8%, 6.7% unemployment, trade surplus and growing by 2%. Sounds good, right? Except official surplus of $143 million in January is accompanied by a fiscal deficit of almost $1 billion annually.

Official figures hide an unemployment level that is estimated to be several times higher than the published data, and a subsidized employment. According to a study by the Institute for Social Development of Argentina (Idesa), public employment in Argentina grew five times faster than the population in the last fifteen years . The average growth rate of public employment was 5% annually, while population grew at a rate of 1%. In 1997, public sector employees were 720,000. In 2011, after eight years of government of Néstor and Cristina Kirchner, public sector employees totaled 1.5 million, more than double. Does that ring a bell? Greece, Spain, Portugal, etc…

Who pays for these public employees? A heavily subsidized economy. 5% of GDP are subsidies, a public spend that only goes to pay a hypertrophied political class and to mask the true cost of goods and services at unreasonably low prices without investing in infrastructure. These subsidies try to plug the hole made on citizen pockets by a currency in constant devaluation and by runaway inflation. Official inflation figures are estimated at 9.7% but international analysts, PriceStats, for example, estimate it at 30%.

And despite the huge public (political) spending, the country does not invest in infrastructure, which are in ruins. Roads, pipelines, trains have constant accidents with casualties … In this situation, the government decided not to seek solutions, but scapegoats or excuses: the Falklands conflict, oil companies, YPF … 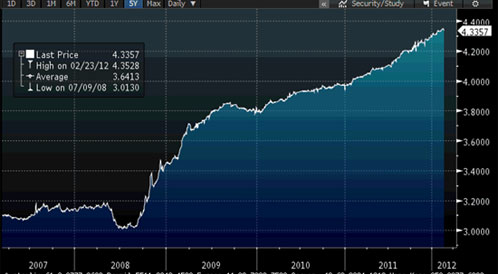 I still remember a decade ago when I was stranded at the Hotel Alvear in Buenos Aires between mass protests, banking crises and monthly changes of government, a writer commented on the local television that “Argentina had the opportunity to choose between being and pretending, and decided to pretend”. And like all subsidized systems, when the government runs out of other people’s money they have to find new alternatives. Re-nationalize what was sold.

Nationalizing YPF to continue feeding the machine of subsidies does not solve anything.

The anti-Repsol rhetoric hides figures that do not match the official story that “oil companies do not invest and make huge profits.” For example, YPF invests in Argentina more than any other industrial company, and among the oil companies, Pan American Energy holds 20% more reserves than YPF but produces 50% less. Who is the one that does not produce or invest?. If we add that YPF sells, by law, 40% of its gas at $0.60/mmbtu, or $ 3.70/bl equivalent, that is, at a loss, the question is: who is squeezing who?

A nationalized YPF would fail to deliver growth or capex. Argentina on its own cannot afford the investments needed to develop the recent discoveries in unconventional oil, over $20 billion, plus the $3 billion YPF invests each year, and would not be able to create joint ventures with other oil companies if these cannot generate an acceptable return. Would a joint venture with Venezuela’s PdVSA fare better? Judging by the lack of success in delivering production growth and conduct investments of the Venezuela giant, it would be questionable.

YPF already invests an amount equal to 100% of its operating income and pays a dividend that was agreed with the authorities to help the Eskenazi family, close to the government, to buy their 25.4%, which is supported by two loans to be re-paid out through the YPF dividends, in a move made and agreed to maintain “the national” status of YPF, but also to make it attractive to local pension funds.

If YPF spent above its means, in a business that generates a net margin of less than 11%, and is already heavily indebted (79% debt to capitalization 2012), using YPF to fuel the subsidy machine would be suicidal, and would lead the company to be technically bankrupt by 2015. It happened already in the early 90s. With a price of oil and gas limited by law and the inability to export, oil investments in Argentina are already poor, a 10% ROCE (return on capital employed) compared to an average cost of capital of 9%. The example of Venezuela’s compulsive nationalization has shown how production and investments fall exponentially as a state entity operates the fields, and the government accounts do not improve.

Cristina Fernandez de Kirchner is witnessing a country meltdown and not just economically, which has virtually paralyzed the government. March and April months are seen as economically very complicated, and YPF is a good distraction tactic.

Many comentators have warned about the diplomatic stance that Repsol has always taken towards the government. While the original plan of the company, when it acquired YPF in an open tender, was to reduce exposure to Argentina and sell some assets to international companies in order to optimize the capex and debt issues that the acquisition entailed, political recommendations from Spain and Argentina led to a decision to keep a massive market share. Since 2005, Repsol has tried to maintain a fine line policy to support the governments of Argentina, while at the same time it has reduced its stake in YPF to 57%, and has tried to appease the state, bringing executives close to the government. But it is complicated, because the machine not only swallows subsidies but now even denies support to Argentine shareholders brought by themselves and their allies, like the Eskenazi family.

Meanwhile, Argentina must understand that production will only increase with a transparent and open system that encourages foreign investments, and should appreciate that, as an oil company, Repsol is far more diplomatic and cooperative than any other. YPF alone would not be able to access the capital market and could not undertake the necessary investments.

This week I met with readers who commented on the subject of Repsol, but I would add a few comments:

. YPF’s natural resources have not been expropriated . YPF is a licensee of assets that belong to the provinces. “Natural resources” already belonged to “the people” – the oligarchs, but that is another matter, for decades. Here what has been done is to seize a majority shareholder. Not everyone has been expropriated. Repsol has been confiscated but not its local partner and manager. Why? Did Eskenazi not manage the company with Repsol? Not only it’s a confiscation, but a xenophobic confiscation restricted to a country.

. When YPF was state owned it was the only oil company in the world that generated losses. Repsol, in fact, saved the company from bankrupcy both in the privatization and in the 2001 crisis (YPF would have collpsed had it not been under the rating and balance sheet umbrella of Repsol). As this excellent article says:

“To clarify this further, it would be interesting to ask ourselves about the performance of the oil company in question before 1992, ie when the state ran the company. The answer is simple: YPF was the only oil company in the world facing losses, and its deficit reached more than five billion dollars, leaving the company destroyed.
Why did a company end with operating losses in a market where it is virtually impossible not to break even? Because it was governed not by economic criteria, but on political grounds: 45,000 employees working there (when it needed 5,000) and the systematic borrowing made by the government to spend on uneconomical capex”

Lending money in 2008 to Eskenazi to have a local partner “close to the government” has been a mistake, as was the BP agreement with TNK (Russia). Not just a mistake that has not helped at all to Spanish interests, but the loan, which was given to co-manage YPF, according to Standard & Poor’s,  may cost Repsol another €1.5 billion of debt . In a very hard report, Standard & Poor’s assumes that the real debt of Repsol ex-YPF amounts to almost 17.6 billion euro , even excluding debt from utility subsidiary Gas Natural. This is well above the estimates of the group, 9.8 billion euro, as it adds financial commitments and other assets as Canaport, “financial leasings” and the debt of Eskenazi.

According to analysts at S&P, Eskenazi’s loan was guaranteed with YPF dividends. In their interpretation, if YPF will stop paying dividends, by breaking this obligation, the “Supplemental Agreement” between Repsol and Eskenazi establishes the obligation to acquire the remaining debt of banks, to acquire all shares of YPF from Eskenazi at the purchase price and pay a “termination fee” of $500 million also to Eskenazi . It should be noted that Repsol denies any responsibility or liability in this point. Spanish and international lawyers are likely to work hard in the coming months.

Investors, especially Americans, expect Spain to do what Exxon did in Venezuela and freeze the accounts of the Argentine state in Spain and the countries of the G20, and expect that lawyers will denounce the agreement with Eskenazi given the reasonable doubt that these alleged debts are invalidated in a seizure. But it can mean years of litigation.For shareholders, Repsol ex-YPF is not just a matter of subtracting the enterprise value of YPF (almost half of the reserves of the group, a third of its capex and c21% of its net income). It is worth highlighting this in a week in which many analysts (32 recommendations of “Buy” zero “Sells”) forget that the oil sector trades based on multiples of cash and debt (PE, EV / DACF and FCF yield). And we must keep in mind that the refining and exploration and production businesses of Repsol, according to Citibank as shown in the graph above, generate low returns on capital employed even in 2016. This is where Repsol has to focus its strategy. In improving ROCE and the percentage of Upstream.The dividend policy, in my view, is irrelevant. Repsol will need to recreate the company. I hope they will not make the mistake of BP or OMV of insisting on a dividend that is small, irrelevant for shareholders and well below its peers, providing no help or value to the company, it’s share price and its balance sheet.For all this, investors must wait to see what the team proposes in its strategic presentation in May.

From my humble point of view, Repsol could make a capital increase that enables a powerful clean up of its balance sheet and must seek exploration assets through purchases in the U.S. and Africa. I already commented here some time ago, reducing exposure to refining, more “upstream” and sell its stake in Gas Natural, which has never created value and investors have never given Repsol credit for  it.

Repsol ex-YPF goes from being an integrated oil company, to a company highly exposed to refining and marketing in Spain, electricity (through Gas Natural) and an E&P division with strong exposure to Venezuela-Bolivia with good assets in Libya and Brazil, added to a mid-sized LNG business, so Repsol could look and seek partnerships to improve its global position. There are hundreds of exploration and production companies that Repsol could buy, with solid exploration assets, which could help the Upstream division of Repsol to become world class. Investors sometimes fear that the company could seek to merge with an electric utility or engage in non-oil assets. I hope not.

Worth a read this article from Robin Mills here:

Indeed, Argentina should look to Venezuela if it thinks nationalisation is a recipe for increasing production.
Venezuela has officially the second-largest proved reserves of oil in the world, due to its deposits of sticky extra-heavy oil in the Orinoco area. But Mr Chávez’s offensive against international investors and his demands for the state oil company, Petróleos de Venezuela, to fund extensive social programmes have caused output to fall by almost 30 per cent since 1998.

Note: Daniel Lacalle can invest in the companies mentioned. This opinion piece is a personal analysis and does not constitute a recommendation to buy or sell.