The economic news of the week in Europe have reduced the euphoria about a possible recovery. France went into recession in the third quarter and general Eurozone data is weaker than expected.

In my new book Journey to Economic Freedom  (Deusto) I devoted a chapter to the mistakes in economic policies of many countries in the European Union, because they were copied from France. Stagnation, high taxation and lack of reforms.  In order to maintain at all costs a hypertrophied state and bloated administrations, funds are spent on useless schemes at the expense of those  who generate wealth.

At the smallest hint of a recovery we see that countries, instead of continuing with reforms, decide to relax and fall back into recession.

And now governments are worried about…deflation. Why? Let’s see…

The risk to the recovery of Spain and peripheral Europe could come from an impact on exports. Spain exported to the larger economies of Europe 50% of its goods. In the first half of 2013, an increase of 8% of exports in Spain, although sales to France fell 1.7% to Germany 0.6% and Italy 0.4%. Seems some peripherals depend less on the EU partners to export.

Foreign investment in Spain between January and June 2013 also shows an important differentiator component on the past. Foreign investment of residents (ie, Spaniards bringing outside money) is only 4.9% of the total, so 95.1% comes from foreign investors . 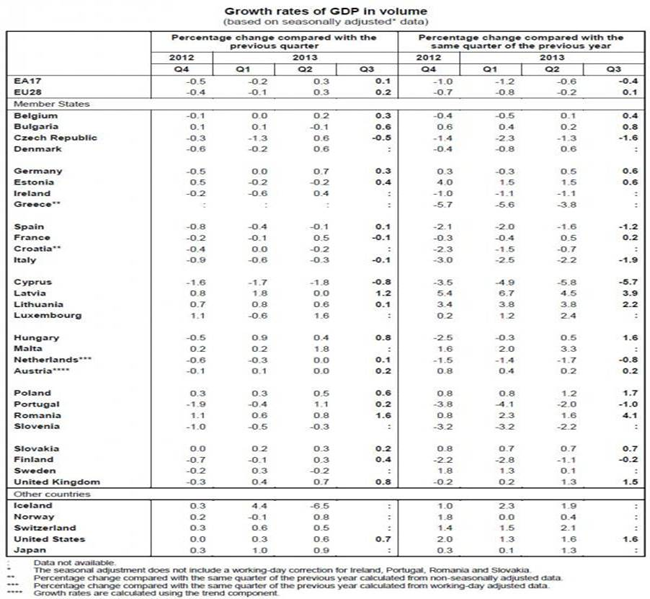 However, in the interviews I’ve had this week the question that was repeated again and again was that the greatest concern regarding the stagnation of the EU is the “risk of deflation.”

First we must clarify that in most European countries and in Spain there is no deflation, there is disinflation due to badly managed industrial plans and overcapacity .

When you have invested (spent) hundreds of billions of euros in “industrial plans” and productive capacity, especially in energy, car industry, textile, retail and infrastructure, what we are experiencing is a reduction of prices due to competition between oversized sectors, an overcapacity of up to 40% in some cases. On the other hand, inflation exists in other elements, very relevant to the industry and consumption, such as energy costs.

The “alleged risk of deflation” is the excuse of governments to justify greater financial repression . Trying to create false inflation through rate cuts while citizens have less purchasing power, or through monetary stimulus plans when taxes rise leads nowhere. Look at Japan, 17 consecutive months of real wage reductions.

Prices fall because we built massive productive capacity for a demand that never arrived and because the disposable income of citizens has been destroyed by confiscatory taxation.

To reactivate the economy governments should return money to the pockets of citizens who have stoically accepted and paid interventionist policies and supported schemes and incentives that have led the EU to spend up to 3% of GDP to destroy 4.5 million jobs and sink the economy.

The economy is still not recovering in Europe, the transmission belt for monetary policy is broken, debt, both in relative and absolute terms, continues to grow, employment is not improving and now they tell us that we enter into deflation.

First, credit to the private sector still has not improved because all available credit is crowded out by government debt, making the financial system more risky and therefore more fragile against any sovereign risk.

Wages are still falling, and to think that forcing Germany to stimulate its domestic demand will have a ripple effect on the periphery is wrong empirically, as we mentioned in this column some months ago, where we showed that the multiplier effect of attracting foreign capital and direct financial investment is three times higher than internal domestic demand stimulus.

This disinflation, the European Japanisation of which I already warned in 2012 is a dire consequence of interventionist policies, which lead to de-industrialization and demand collapse.

Combating possible deflation risk with more interventionist policies while still curtailing the consumption capacity of citizens with higher taxes only leads us to enlarge the debt hole.

In addition, the voices calling for monetary stimulus forget that the velocity of money, which measures economic activity, collapses, creating a transfer of money to financial assets, stocks and bonds, but the collapse of productive investment. According to Citigroup , the velocity of money in the United States  and United Kingdom has fallen to levels of the mid-60s while nominal GDP is at 2001 levels. But the stock market is at historic highs and high risk bonds, at minimum yields. That is, we create ‘wealth illusion’ in financial risk assets while sustaining GDP artificially, but destroy wealth creation and employment .

Prosperity does not come from unicorn breeding, but consumption and productive investment.

1 thought on “Deflation? No, Disinflation. The Consequence of Interventionism”