As you know, I have lived in London for ten years. The United Kingdom, throughout the Gordon Brown years, was the Keynesian stimulus experiment that the advocates inflation and devaluation always ‘forget’. They talk a lot about Abenomics and Obama but forget the stimulus+inflation-led economic destruction of the early 2000s, and the hole in public finances it caused. A hole that the UK has not been able to dig itself out of, despite carrying out a brutal monetary stimulus policy where the Bank of England buys nearly 70% of the public debt issued. 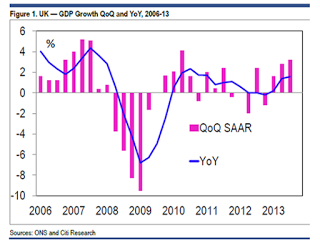 However, to the surprise of many experts, the United Kingdom appears to be starting to recover quickly. It is estimated that the economy grew by 1.5% in the first nine months, with a marked acceleration from quarter to quarter, to 3.2% annualized, and that will continue to advance by 3% in 2014. Given that in 2012 the economy grew by only 0.2%, the results are spectacular to say the least, especially considering that other members of the ‘Money Printing Club’ – Japan and the United States – continue to disappoint with very questionable macroeconomic results, from a massive trade deficit and debt in Japan, to lacklustre growth and weak labour market, according to the Federal Reserve itself, in the U.S..

What is the miracle of the British economy? Probably a housing bubble of dangerous proportions, already warned by newspapers as ideologically diverse as the Daily Telegraph , The Guardian and City Am (” Subprime Britain”, read an article).

There are unquestionable positive elements:

See the index of house prices from Nationwide: 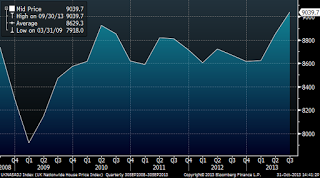 But there are several warning signs:

Of course, the Bank of England is “carefully monitoring the risk of the creation of a possible bubble.” It does not see danger today because transactions and mortgages signed are well below the highs of 2008, and because a large part is sold without any type of mortgage (but a lot of corporate debt). But that is where the risk lies… When those funds that buy real estate thinking of high rental yields find that there is an excess of unsold homes, which is never recognized as you all remember, corporate debt defaults start to rise. At the same time, the possibility of selling those houses becomes difficult because wages don’t increase and the capacity of the majority of population to acquire just gets worse … That is when the market sees the hidden stock of homes.

The argument that the UK needs to build even more houses to cope with demand and help lower prices doesn’t stack up. Building is a pro-cyclical business. And demand cannot rise eternally with wages and disposable income falling or stale.

Perhaps this time the house price rise is more sustainable growth, as some argue, as it is less aggressive in debt. I would be cautious. This time we are substituting mortgage risk for corporate debt risk.

Economic growth supported by a disproportionate increase in the price of houses and thinking that these can only go higher because “we need to build much more to meet future demand,” explodes aggressively on almost all occasions. This time, moreover, the risk is in the balance sheet of the government that guarantees the Help To Buy, and therefore, if it goes wrong, you will pay it in tax hikes.

We have to keep an eye on this risk. But above all, a message to countries that do not attract hedge fund managers, Russian millionaires or Rock stars: Please do not copy the formula.

1 thought on “UK Recovery: Sustainable Or Another Housing Bubble?”