Fans of monetary stimulus always ignore the biggest and best push for the economy. Cheap energy. Finding oil and gas.

The United States have achieved an economic stimulus equivalent to 1.3% of GDP thanks to the energy revolution brought by fracking. It is a very significant positive effect, both on the supply and demand side.

At the close of this article, the spread between U.S. benchmark oil (West Texas Intermediate) and the European benchmark (Brent) stood at nearly $15/bbl. The lack of infrastructure does not allow to evacuate and export the surplus from the U.S. to the world, and that isolates the U.S. and Canada price as separate and autonomous market dynamics.

The spread between West Texas Intermediate and Brent is likely to remain at $15/bbl. The lack of infrastructure does not allow evacuating and exporting the surplus from the U.S. to the world, and the Keystone filling is not enough to offset the rise of production.

The price of gas in U.S. is $ 3.9/ mmbtu compared to the European average of $ 8.5 / mmbtu. More than twice. Meanwhile, in Japan, energy costs have skyrocketed in 2013 and the price at which the country imports liquefied natural gas exceeds $ 15/mmbtu … five times more expensive than the U.S. gas.

Not only the U.S. imports less, but the cost is lower than that of its competitors in the OECD countries. It is the way to energy independence in the U.S. I already commented in 2012 here.

The effect produced by this energy revolution is twofold:

It greatly reduces the “geopolitical premium” to be added to the price of crude . Even though Brent reflects an obvious geopolitical risk, it is much smaller than in the past because the balance between supply and demand is very well covered. That the price of Brent is “only” $110 a barrel in an environment of decent demand growth and supply problems in Libya, Syria, Iraq and Iran is a clear proof of how well the market is supplied .

Brent price dynamics is lateral, despite supply problems in Libya due to internal protests, which led the country to export less than 90,000 barrels per day (compared to the country’s capacity of 1.25 million barrels per day), sanctions to Iran (which led the country to export about 1 million barrels a day, compared with its capacity of 2.5 million) and the political difficulties to boost production in Iraq after the war. In fact, Iraq is likely to slash its production guidance by 35%. Meanwhile, Iran is aiming at adding 500kbpd to supply, but technical challenges remain, more important than sanction lifting. At the OPEC meeting, Iran stated that it was ready to open its doors to the oil majors from Europe and the US, but the seven companies named by Iran to boost oil output are unanimously sceptical about the growth targets set by the country (BP, RDS, Total, ENI, Statoil, Exxon and Conoco). 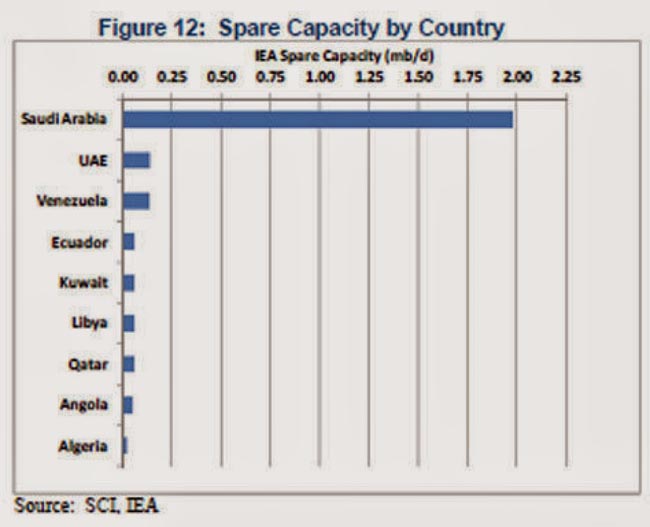 Not only the spare capacity of OPEC countries is adequate to address specific risks, but the oil price still includes a negative impact of production incidents – unexpected cuts to supply from military or political crises – of 2.7 million barrels a day. If those unexpected cuts are normalized, the geopolitical premium in oil prices will fall further . 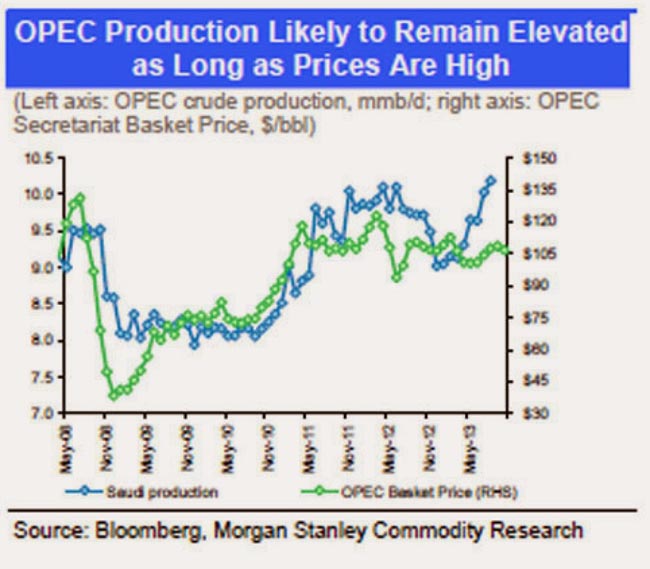 OPEC held its meeting for the half year and, unsurprisingly, maintained its production quota of 30 mbpd.
The return to normal production in Libya could add 1m bpd, but the future rise in production in Iraq is under threat, and I see it impossible to take the country’s production from 3mbpd to 4mbpd in 2014 or mid-2015. A possible lifting of the embargo on Iran might enable the country to produce and export an additional 500kbpd.
As such, it is virtually impossible that, even with Libya and Iran returning, OPEC production would reach 33 mb/d. Therefore the call on OPEC stays at 29-30 mbpd in 2014. Saudi Arabia, Kuwait and Emirates are expected to balance the market cutting part of the production that they increased to offset the Iran embargo. It requires a maximum cut of 1.1mbpd to tighten the market aggressively.

There is enough spare capacity and the incremental production comes from so-called “safe” countries, the U.S. in particular. Of the newly added production capacity in the oil value

1 thought on “The Oil Market Is Well Supplied. Thoughts for 2014”