Here are my highlights of the first day of the Oil & Money Conference 2012:

“There is no shortage of oil anywhere. OPEC has strong spare capacity. The market is very well supplied” Abdalla Salem El-Badri 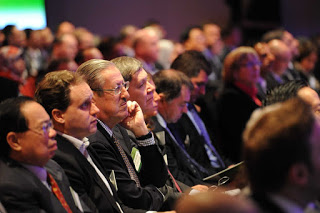 “This is the 33rd Oil & Money Conference. In 1979 in the first one the Herald Tribune run the headline where President Carter said oil production had peaked, and the press said OPEC production would collapse to 15mmbpd in 2010. Here we are, global production is at record 87mmbpd, and OPEC produces 30mmbpd”

Abdalla Salem El-Badri, OPEC Secretary General
“Call on OPEC falls 500kbpd in 2013” “everybody is making money out of high prices” “when we make money the G7 makes more money’

“There is plenty of growth despite the crisis”

Maria Van der Hoeven (IEA) and El-Badri (OPEC) agreed “there is no shortage of oil, the market is very well supplied, inventories are strong at 59 days and spare capacity remains high at 3.5mmbpd” “There are worldwide more stocks than ever”

Adam Sieminski, IEA:
“US energy independence is not a pie in the sky. It’s realistic”

On EROEI: “as long as consumers are willing to pay for it and resources are there, consuming some energy to produce energy is fine”

Orlando Cabrales, President of Colombia’s National Hydrocarbons Agency:
“Colombia has never ever intervened any oil and gas contract” “we welcome investment, it’s in our DNA”

Success rate of finding gas and oil in Iraq is at 70%. More of Iraq needs to be explored

Strong commitment to sustainability and a balanced energy mix with all energies, renewable and fossil, together.

Fossil energies to represent 76% of energy supply in 2030. Strong growth from solar and biofuels but small impact.

Renewables will not change the world. Oil, gas, coal = future. We have to make them ‘cleaner.’

“I’m surprised when people say solar energy is becoming competitive. How can you be competitive when you’re losing money?”

“We have all the oil and gas we need. Apologies to those who want us to be running out”

“We have a lot of oil and a lot if gas, a lot of discoveries. We will have oil and gas for hundreds of years”.

“There is no peak oil but there is peak capacity short term” “We have to more vocal and tell people we are not sorry, we are doing our best”.

Mike Daly, BP:
“The future is going to be technologically challenging but not more than it has been in the past”

Victor Zhikai Gao, director, China Naional Association of International Studies
“How does China view the prospect of US energy independence? The sooner, the better, the longer the better”

Promoting the concept of “Americhina”: China gives US full support of energy sufficiency, China will provide market and capital for other oil producers.

Antonio Merino, Repsol
“Oil price in gold terms has not changed. Most of oil price move is explained by currency debasement and QEs”

For my notes and feedback of the Oil & Money 2011 read here.

The 2013 forecast call on OPEC crude (+stock chg) is 29.8mb/d, a significant variance of 1.4mb/d vs current OPEC production … Note the next scheduled OPEC meeting (review the market outlook) is on 12 December.Demand:. Global demand is forecast to grow by 0.7mb/d in 2012 (89.6mb/d) and 0.8mb/d 2013 (90.4mb/d), based on global GDP growth of 3.3% in 2012 and 3.6% in 2013 – the 4Q12 estimate has been reduced by 0.3 mb/d (Hurricane Sandy and a lower European 4Q12 starting point). OECD demand is forecast to decline by 1.1% in 2012 and by a further 0.7% in 2013, while non‐OECD demand is forecast to rise by 2.8% in 2012 and by 2.6% in 2013. The IEA does note that ‘shifts in demand patterns and changes in heating oil specifications are complicating the task of assessing the adequacy of heating oil inventories ahead of winter. As more stringent fuel quality standards are making heating oil and on‐ and off‐road diesel increasingly similar, however, a relatively weak 4Q12 outlook for trucking demand may provide an offset, and heating oil inventories may not be as tight as might otherwise appear’.

. In terms of the OECD: in the US, Hurricane Sandy knocks US demand by 230 kb/d in October; the NOAA is predicting ‘that the US Northeast, Midwest and South will experience a 20%‐to‐27% colder winter this year (expressed in terms of HDD) than a year earlier … in Europe, German demand for 2012 is now seen to fall by 2.6% (prev ‐1.6%) given economic conditions; data for France ‘reveals a worsening of the y/y trend’ …. for Japan, ‘an absolute decline of around 170 kb/d (or ‐3.6%) is foreseen in 2013 as the anticipated call on residual fuel oil and crude for direct burn eases as further tsunami‐impacted nuclear/coal capacity slowly returns whilst additional gas capacity is also envisaged’.

. In terms of China, early estimates of Chinese demand in September are 505kb/d above expectation , which reflects ‘surging refinery crude intake, following another increase in domestic fuel process and depleted product inventories saw apparent consumption rise to a seven month high, of 9.7 mb/d. Industrially‐important gasoil/diesel returned to positive growth territory for the first time since March.

. ‘Iranian crude output marginally reversed its downward course in October, rising by an estimated 70 kb/d to 2.7mb/d. Preliminary data for OECD and non‐OECD imports from Iran show a 300 kb/d increase in October, to 1.3 mb/d, compared with an average 1 mb/d in September and August. China and South Korea appear to account for the lion’s share of the increase in Iranian imports’.

. while Saudi production was up by only 50 kb/d in October, to 9.85 mb/d, the IEA says that ‘tanker data suggests crude exports rose in October by as much as 200‐300 kb/d. The end of the peak power generating season, when demand for direct burn crude typically jumps, may have freed up more barrels for export’.

. ‘Iraqi crude oil production in October rose by 20 kb/d, to 3.16 mb/d, with higher supplies from the northern region accounting for all of the increase. Crude exports rose by 30 kb/d, to 2.62 mb/d’.

.  ‘Oil bunkering, or theft, costs the Nigerian government an estimated $7 billion in lost revenue per year’.