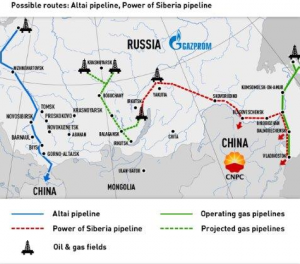 Price: Estimated $350-400/mcm. The formula pricing (oil and a basket of oil products)

Capital Expenditure: $75bn (China’s share $20bn) – includes development of Chayanda and Kovykta fields; and construction of a 2,500-mile pipeline, a petrochemicals complex and a helium plant

Prepayment: $25bn (yet to be confirmed)

The estimated price of the Russia-China contract is $9.75/mmbtu (only $0.95/mmbtu higher than long term Europe contracts). This means that E.On, RWE and GSZ will find it difficult to lower their gas price-offtake agreements in the negotiations of their contracts with Gazprom.

The two sides were not actually negotiating a specific price per unit of gas, but rather a ratio of gas to oil prices. The numbers above likely assume prevailing oil prices, and actual realized prices over the course of the contract could vary significantly depending upon oil markets (according to Citi).

The contract signed targets a nominal volume of 38bcm. However, volumes could be expanded to 60bcmpa later on

Citi estimate the IRR of the project at 4.4% on an ungeared basis and 4.8% assuming 50% project gearing, lower than either Gazprom or Petrochina’s cost of capital, thus generating a negative NPV.