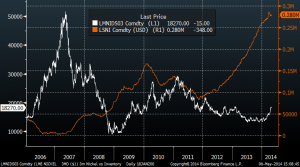 Nickel prices are up 33% YTD following the introduction of a ban on ore exports from Indonesia in early January.

This ban is unlikely to be lifted until 2015, according to analysts. However, the higher the Nickel price, the more likely it is to see it lifted. According to David Wilson at Citigroup “removing the Indonesian flow would be similar to removing Saudi Arabia from the oil market”.

The top nickel producers are Philippines and Indonesia both at c440,000 mt, followed by Russia.

The Ukraine crisis impacts the third largets nickel producer, Russia. Within Russia, Norilsk Nickel is “the single-largest producer of the metal, and group production of 285,000 tonnes last year accounted for more than 15% of the global total”, according to The Wall Street Journal. Therefore, the risk of sanctions on this company alone would shift the supply-demand dynamics of the market rapidly.

Although supply from Russia has not been cut, it poses new risks on a market where demand is not strong, but supply cuts can rapidly move to create a very tight situation.

Growth in demand remains fully dependent on China. An expected 4.9% to 2020 pa growth is supported exclusively by Asia and considering the current revisions of Chinese GDP from +8.2% to +7.4% by the OECD, this demand growth is likely to be brought down.

Inventories, as the graph shows, have not moved drastically despite the massive price increase, which means that the physical market is comfortable despite the Indonesia ban. At the end of March 2014, China had over 20Mt of nickel ore stockpiled.

Many traders see the current $18k Nickel price as temporary because once prices increase dramatically Indonesia would lift the ban to benefit from better prices. However, the market can move from a 140kt global surplus in 2013 to a balanced market, or even a deficit in 2014. Indonesia alone moves this deficit one way or the other, but the combination of Russian sanctions risk and the Indonesia ban makes the balance extremely fragile.