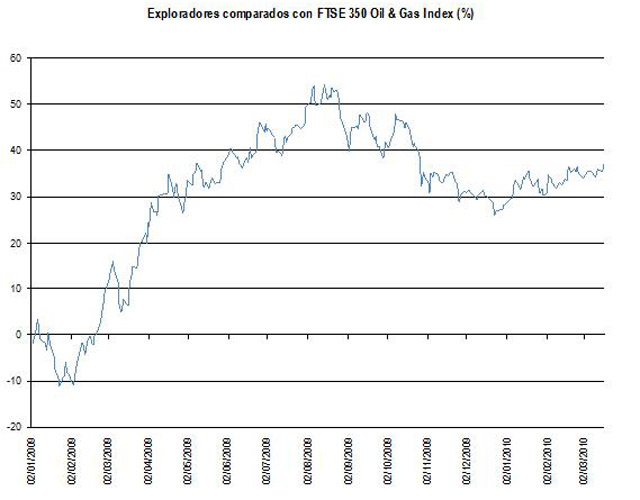 (Article published in Cotizalia in Spanish on Thursday 25th March 2010)

These few weeks have been very relevant to the oil sector. On the one hand we have seen the acquisition by BP of Devon’s assets in Azerbaijan and Brazil at a price 15% higher than initially indicated by Devon. India is looking to establish a sovereign fund of no less than $245 billion to buy oil and gas assets and compete with China. Gulfsands Petroleum and Statoil’s assets in Brazil are also in focus. And finally, China’s CNOOC has acquired 50% of Bridas Corporation in Argentina for $3.1 billion, which implies that if we apply that assessment to Repsol’s assets in the same country, the valuation of YPF would be $15 billion, 25% higher than the average estimated by the market consensus.

Two weeks ago we talked about services. Today we will focus on one of the most volatile and exciting subsector in oil & gas. Independent explorers.

These companies are attractive for two reasons. First, there are very few independent companies with attractive natural resources, which makes them almost inevitable “targets” for predators. Second, their exposure to high-potential exploration assets causes the values to move upwards and downwards faster than other sectors. These are also companies where there is only one objective: to find and monetize reserves. No plan for 50 years, no political strategy, no obligations towards the media. Pure economic value. The sector has generated an average appreciation of 19% in 2010 and 72% in the past three years, including the stock market debacle. And between 2007 and 2010 independent companies worth $75 billion have been acquired, according to Wood MacKenzie.

For the uninitiated, let me briefly explain how they are valued.

Independent explorers buy assets with an attractive potential for exploration, drill them and, once they are assured that the wells are commercially viable, either they develop the portfolio or farm-out to Big Oil. Normally they keep a series of wells that will ensure production, access to financing and cash and use the financial resources to explore more and sell again. The key factor to value for an investor is the history of exploration successes. It is not the same trust Tullow Oil, for example, with 77% of exploration success track-record, and Soco, with 60%, or Lundin or Premier Oil, with a much lower track-record.

The independent companies are valued on an estimate of their core assets (“core NAV”) and an estimated percentage of future exploration success on their portfolio of wells. A percentage assigned by the market depending on the geology and seismic interpretation. Then, as they start conducting their exploration program, the market assigns value to the reserves encountered, or subtracts it from the pre-estimated value given to those assets if what they find is a dry hole (non-commercial).

If you are interested in the sector, pay attention to companies with little debt and exposure to areas of strong interest for predators, but also to those with better opportunities to acquire and explore reserves in attractive areas: West Africa, North Sea, Gas in the U.S. and Gulf of Mexico.

In Africa, the war for the control of reserves in Uganda and Ghana has made Tullow Oil one of the most successful stocks of the industry, but we must not forget the possibilities that arise in Nigeria for Afren Oil. Elsewhere, Anadarko, the leader in the Gulf of Mexico, gave one of the biggest successes of 2009 in Sierra Leone.

In gas, the main candidates to develop large reserves in 2010 are some of the few remaining independents in the North Sea, Dana and Premier.

In shale gas in the United States always look for companies with low costs and an intensive exploration program, from Range, Ultra Petroleum, Petrohawk or Quicksilver. Obviously they are exposed to a complex environment of gas prices in the U.S., that falls almost 2% per week, but also the least affected thanks to their low costs and attractive position to make alliances or mergers.

These are stocks that are highly correlated to oil and gas prices, but also very exposed to the credit environment, as they have to maintain a very low level of debt while financing large exploration programs. These are stocks to buy when there is a point of entry, either a capital increase to finance a drilling program or the announcement of a non commercial well of low relevance before an intensive program of exploration. A sector that is not suitable for risk averse investors or fans of dinosaurs with high dividend yield. But exciting as few.