Most analysts keep in their numbers for 2012 and 2013 a massive improvement in profitability for those companies that buy long term contracted gas from Russia and Norway. The thesis on ENI, E.On, GDF-Suez and others is simple. These companies have been losing money on their long term contracts due to an agressive take-or-pay obligation. Basically these groups, in a strive to maintain giant market share and profit from their exposure to retail, reached agreements with the major suppliers of gas in conditions that looked very attractive ONLY if gas prices rose and demand continued to soar. As such, major suppliers locked in large take-or-pay contracts with oil-price-linked formulas based on the “conservative” bet that gas demand in Europe would rise by 2-2.3% pa from 2007-2020 and that gas prices would retain their historical link to oil prices.None of those things happened, and greed turned into loss. The accumulation of market share was part of the problem (most of these companies control c60% of market share in their countries), making them very exposed to GDP and demand growth.

… And demand growth vanished. European gas demand peaked in 2007 and is c9% below that level four years later.

The other problem was the bet on oil-gas link remaining, driving spot gas prices higher as demand soared. What happened is that spot gas prices collapsed by 15%, oil prices soared and the long-term contracts were overpriced versus flexible spot levels. This meant losses that reached levels of €1-1.5bn in 2010 for some companies. These losses are expected to turn to profit by 2013 through a combination of re-negotiation of contracts (mainly with Gazprom) and improvement of demand. Errrr…. not likely.

The bet was wrong on both sides (demand and price), and is likely to get worse mid-term, as demand growth estimates in Europe are overstated given the downward GDP revisions. Furthermore, Gazprom and Russia are in active discussions to build a 30BCM per annum pipeline to China, and the Yamal LNG project (where Total and Qatar are likely to be major players) will create a new export route for Russian gas. Therefore, Gazprom’s “urgency” to renegotiate the take-or-pay contracts is diminishing by the day. And their policy is now to preserve wealth (reserves) not to maximize volumes exported to Europe. Gazprom’s decline rates (4% pa, some see 6%) don’t justify a policy of “maximizing volumes at any cost”.

Well, see below a very interesting chart sent by Citigroup updating on the weakening environment for utilities as the oil-gas spread widens. 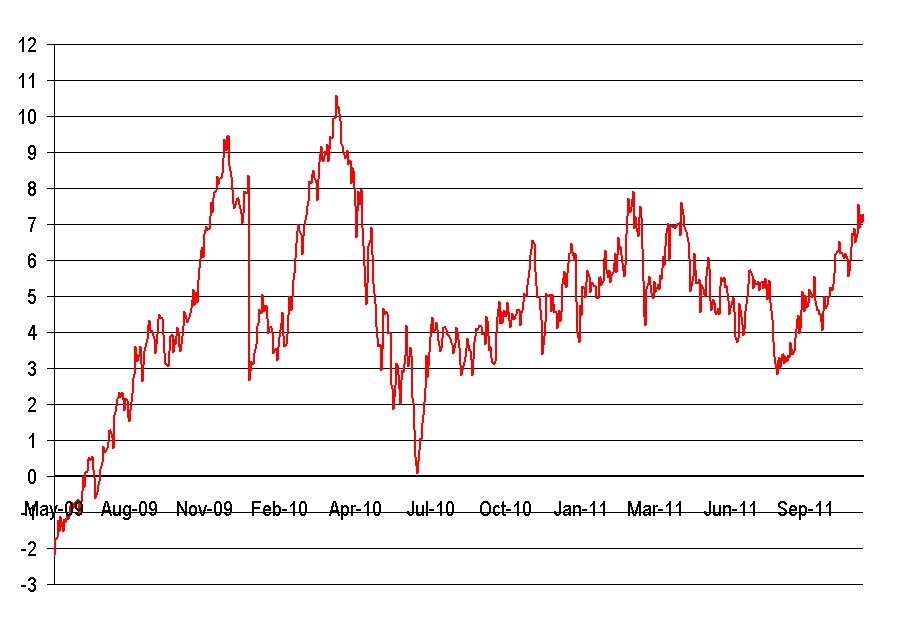 According to Citi “the spread is now back up to €7/MWh as you can see from the attached chart mostly driven from the appreciation of the US$ on which the oil basket that drives long-term gas prices is based. Midstream gas players should now be nearly 100% locked in through October 2012 and ~50% locked in through October 2013 at what they estimate to be a ~€5-5.5/MWh spread. So any incremental volumes sold from now on would actually be at a higher cost given today’s prices, exacerbating loss-making positions”.

The issue, as highlighted above, comes mainly for the giant market-share owners. European demand is unlikely to recover to 2007 levels until 2015, the flexibility of LNG and Asian demand is keeping the gas market in better conditions, but still oversupplied, and the strategic decision of revising take-or-pays goes radically against the political role of these giant companies as “security of supply” providers.

Consensus expects a return to profitability from demand recovery and re-negotiation of contracts generating an uplift in EBITDA of between €1.5bn and €2bn. However, with Italian gas demand down by 4% in 9M 11 and new gas volumes coming from Libya (16mcm/day, or 1.5bcm in 2012 due to the opening of Greenstream) prices are falling further while ENI may be required to assume some Russian take-or-pay obligations, equivalent to an additional 2 bcm in 2012e, unless we see a favorable outcome from renegotiation with Gazprom on both flexibility and price, something that seems unlikely.

Concerning GDF-Suez, new negotiations are starting now on contractual clauses (renegotiation every 3 years). Normalization is expected by 2013 with still a wide range in the consensus: (+€1bn – +€2bn) €1bn delta on 2012e Ebitda of Gas division from one broker to another.