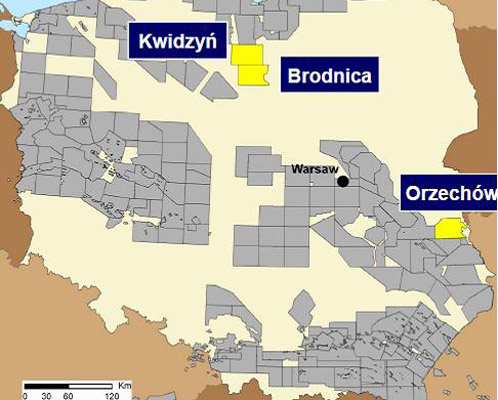 (This is a merger of two articles I published in Spanish in Cotizalia)Nine hundred billion euros.This is what Europe could save in its goal of reducing CO2 emissions by 80% in 2050 if, in addition to further renewable energy, the continent would develop its shale gas reserves according to this sector study. And what will Europe do? If it follows the example of France, threaten to ban hydraulic fracking.

Fracking technology, thanks to the revolution of shale gas in the United States is tried, tested and of negligible ecological impact. However, we have seen many alarmist reports, even a movie, Gasland, which was immediately refuted by the industry, scientists and the Department of State U.S. Energy as inaccurate… But best of all in these alarmist reports is that in every one you read that “we could not confirm accurately any of (these) claims “(Cornell study, for example). When I wrote this post about the shale gas revolution many just ignored it as uneconomical.

Point by point, it is worth noting:

Hydraulic fracturing technology is proven, is used in thousands of wells in the U.S. annually safely, and there have only been one or two cases of minor accidents. The fluids used in the fracking of the rock are composed by more than 99.98% of water (94.62%) and sand (5.24%), with a minimal amount of chemicals, highly diluted, easily stored and handled safely.

Of these chemicals, the majority (hydrochloric acid, ethanol, methanol, ethylene and sodium hydroxide) are recovered perfectly in the extraction process.No state or local department in the U.S. has found evidence of water pollution of aquifers. The industry is also using more than 5,000 tons of steel and cement to protect the groundwater, and the fracking process occurs at least a mile deep, well away from the aquifers.

This reality, Europe’s available natural resources is what none of the politicians and lobbyists mentioned, fans of subsidies, want you to see. They prefer inculcating fear with tales of energy dependence and expensive subsidised technologies. Before looking for a solution to develop the continent’s natural resources efficiently, in a clean and competitive manner, they prefer to ban. And then complain about the energy dependence.

Europe wants cheap energy, but does not want nuclear, and now seems unwilling to develop shale gas. Meanwhile, in the 1st quarter of 2011 energy costs, paid by businesses and consumers, are again the highest in the OECD. The EU will continue to be 100% of the cost of CO2, 70% of energy subsidies in the OECD and will further reduce its ability to compete.

While gas production in the U.S. has pushed prices for gas and electricity at highly attractive levels for industrial productivity, the policy of “not in my backyard” of the EU continues. It’s easy to complain about the evil energy exporting countries when at the same time domestic production is curtailed. Instead of collaborating with the industry and with proper regulation to monitor that gas is extracted in the safest and most ecological way, they prefer to ban, with the risk of sinking the competitiveness of our economies with expensive energy as we demand that the rest of the world changes.

But Poland is different. Wood MacKenzie estimates that Poland could hold 3 trillion cubic feet of gas reserves in unconventional (tight gas and shale) spread between the North and the Midwest,which, if confirmed, would mean an increase in European gas reserves of 47%.

Poland depends on Russian imports by more than 75% (11.6 BCM / year) and the unconventional gas reserves can be a very important factor to improve its ratio of domestic production.

Given an opportunity to access new reserves in countries with no geopolitical risk, European companies are starting to wake up and rushing to the challenge. Total has just moved in. However, in Poland the main companies betting on the resource base are Chevron, ExxonMobil, Marathon, Talisman and Conoco.

The Polish government has awarded over 85 exploration licenses lately with the goal of achieving results in three to four years. Conoco (with 3 Legs) has been the first to drill near Gdansk, and the results are very solid although it is early to know the cost structure or plan development.

Besides the major U.S. oil companies in Poland there are several independent exploration companies present, 3 Legs, San Leon or Aurelian, for example.

The recent IPO by 3legs values the Baltic Basin shale acreage at ~$450/acre.

It is worth alerting the risks of being overly optimistic.That’s why it seems very exaggerated what seeking Alpha said that Poland shale gas may be the end of Gazprom.

Poland has signed an agreement with Gazprom to increase its supplies by 30% in 2011 and Ukraine has increased its commitment to buy Russian gas by 11% this year …And Ukraine has its own potential in shale gas exploration, as Chevron knows. that is why the US giant is reviewing prospects in the Polish border with Ukraine, in Zamosc.

And in the rest of Europe? It is still very difficult to see real possibilities due to lack of political support. Statoil and Chesapeake are analysing more than 15 new areas in Germany, France and the North Sea, among others. The last time I saw the CEO of Chesapeake in March he was confident of the geology but not optimistic about political support.

In my opinion, the shale gas in Europe is an excellent opportunity but also carries an operating cost of not less than $2/mmbtu given the enormous cost of water in Europe, representing nearly 60% of the cost of drilling. and water is essential to fracture the rock.

Poland is now beyond the stage of “promise” and is a country we will follow closely in this blog, because when you see such concentration of oil companies in one area, there is a reason.

3 thoughts on “Shale Gas, Poland… The Energy Treasure That Most Of Europe Rejects”