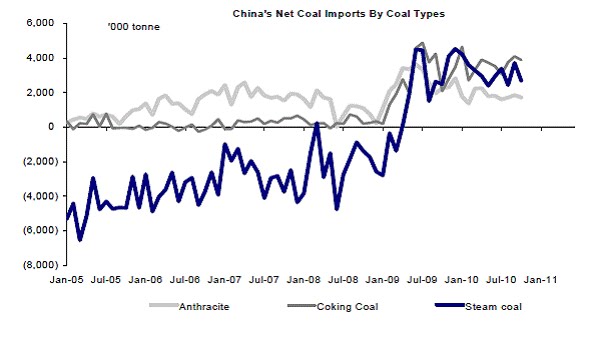 First of all, dear friends,I wish you all a 2011 filled with peace and prosperity.

As this is a time of predictions, and last year I was not very wrong, I’d like to leave my humble opinion on what 2011 can bring us, I see as a year of consolidation of trends in 2010: OECD decline up to their eyeballs in debt, low rates and more inflationary monetary policies.

. Oil at $105/bbl due to increased emerging market demand . With +1.5 to 2% oil demand growth in 2011, 75% from emerging markets, crude oil inventories should be reduced to levels close to the average of the last 5 years. Global demand will continue to be dominated by growth in China, India, Latin America and the producer countries. Pay attention to demand. It’s all that is going to move prices. Do not bet on peak oil theories or supply shortages in 2011. OPEC still has 5 million barrels per day of spare capacity, and we will see Russia confirming its 10.2mbpd output, while Saudi Arabia could easily increase production by 1mmbpd if needed. The world economy has shown that oil at current prices is not a problem. A high price is a sign that the economy works, companies are investing more in exploration, they discover more and the total cost to consumers does not rise due to crude prices, but due to taxes. The cost of fuel is less than 25% of the cost of airlines, and a tiny percentage of the final price of petrol and diesel (55% -60% is tax).

We have oil for many decades. More than sixty years of demand in proven reserves. And rising. In 2010 the replacement rate of global reserves will exceed 100%. And with a 17% increase in overall investment in exploration and production, the chances of a global reserve replacement of 100% in 2011 are very high. And probably in the coming months we will see major innovations in unconventional oil, as we saw in shale gas. If oil stays above $60/bl, as expected, investments in new unconventional reserves, which rose 230% in the past five years, will continue to grow.

Bad year ahead for Iraq and Nigeria. The price of oil is not flowing to the people and patience is being exhausted. We are seeing new security problems in the Niger Delta, and I think in 2011 we will have some major scares. In Iraq, the war is now administrative. On a recent visit to Baghdad by a group of investors, companies made it clear. With no stable government, no legal clarity and security to invest, it is impossible to reach 3-3.5 million barrels per day of production. Beware of listed exploration companies heavily exposed to Iraq especially those that rely to Kurdistan to work.

I still see a positive environment for service companies that benefit from increased investment, from Petrofac and Seadrill to downstream-heavy TRE. I am still cautious on seismic names. Capacity is way too high and increasing, while demand has not recovered to absorb the already high supply, so margins are not going to rise easily. As for independent exploration and production companies, the war for natural resources will accelerate M&A, and growth new frontiers. Focus on Tullow, Soco, Chariot, OGX, Cairn, Anadarko and Novatek.

M&A in Oil & Gas will surpass the $150bn mark set in 2010. Large companies have to find truly transformational deals to drive growth that has been so elusive in 2000-2010. More shale gas ventures in the US can be expected, but I believe the focus will be in frontier areas: West Africa and LatAm.

Refining margins are likely to do nothing as the economy recovers but overcapacity continues to dominate the refining sector. We had 7mmbpd of overcapacity and this is rising, with 370 refining projects in 90 countries around the world in the next five years (UBS source).

. Coal, Coal, Coal. Coal at $140/MT. China burns 55% of the world’s coal, and that number is expected to rise by 65% over the next five years. China has half the U.S. GDP and consumes 3 to 5 times as much coal. And in India and the rest of Asia the situation is similar. Despite the environmental rhetoric that we use, these countries do not have to cut their growth just because we say so. Meanwhile, the supply problems will continue, with the protests of organized groups in Newcastle and flooding problems in Australia. As of today, c.100mMt of annual coking coal production (c.40% of the global supply) is under force majeure arrangements.

. Weakness of carbon dioxide (CO2). You know it, that “fake commodity” artificially invented, where demand and supply are imposed by political entities… and it still does not work. In 2010, CO2 has barely kept the €14/MT level. Neither Copenhagen, or Cancun, or the efforts of several investment banks and environmentalists have helped to raise the price. The alarms bells are ringing and there are voices calling for imposing a minimum price for CO2. Interesting. The interventionists were rubbing their hands at the prospect of increasing the price of CO2 through more than questionable environmental policies, and now they need to find inflation through imposition.

The supply of CO2 (EUAs) exceeded 24.8mMt in November (a record) and 24.4mMt in December. With the European Union and OECD undergoing a very slow recovery in 2011 and the most environmentally committed countries experiencing huge debt problems with c$300 billion to refinance in 2011, the excess supply will increase.

The companies benefited in this environment may be the traditional power generators.

Beware of turbine manufacturers. 2010 was no exception, it was the the beginning and the fall in new installations will continue impacting a sector with significant overcapacity. Europe new installations will be flat at best, China up 10%, US flat at best, rest of the world +5%, driving a +5% to +13% growth in the global market… while manufacturing capacity, which was already too high, has increased by c8%, driving a 39% oversupply (MAKE, GWEC source).

. Natural Gas to suffer for another couple of years. A bad nat gas year is one that sees the price of Henry Hub at $4.5/MMBTU amid the coldest winter of the last ten years. In 2011 we will continue in a complex environment. Liquefaction capacity increasing by 10BCM, shale gas production increasing by 6% and a very slow recovery in demand for electricity. The NBP (UK) price will continue to support the $7/MMBTU equivalent thanks to the decisions of Qatar, Norway and Russia to control supply. The liquefied natural gas sold to Asia will continue to trade at a premium over Europe, but a significantly lower one, as supply problems in Korea, Japan and China are eased.

Of course, a volatile gas market benefits the companies that profit from arbitrage between markets, like BG Group, but also to a lesser extent, Statoil and Shell. The losers are still the Central European power conglomerates heavily exposed to gas, and companies like Gazprom, which will again have to renegotiate some contracts.

. The nuclear renaissance is delayed, but it is happening. Low power prices, weak gas and excess capacity have delayed plans in the UK and other European countries to increase their nuclear fleet. But if they care about the environment and strive to reduce CO2 emissions, the nuclear option is the only real alternative to achieve these goals. The nuclear renaissance is inevitable in China, Russia and other countries. 56 reactors under construction, 20 of them between China and Taiwan. More than 180 gigawatts of new nuclear capacity through 2024.

The winners in this environment are the equipment companies that build new plants, Siemens, Alstom and Amec. Nuclear-heavy generator stocks are more dependent on the evolution of power prices. And in that area, in 2011, again we will see major differences between countries with capacity problems (Nordpool, with hydro reservoirs at 24%) and over-capacity countries (Germany, Spain, Italy). In Europe power demand growth in 2010 (+3.5%) did not offset the fall of 2009, while capacity continued to increase (predominantly solar and wind). This is not a positive backdrop for power prices throughout the continent.