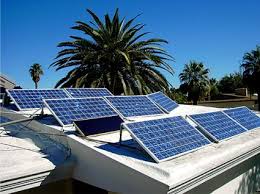 Solar stocks are the worst performers again, despite the Fukushima hype and extremely generous tariff support. The solar sector (January to June) is down 10% versus the renewables sector down 5.8%, and some of the most abrupt moves in solar are in Q-Cells -33%, REC -41.5%, Phoenix Solar -26%,  Renesola -49%, E-ton Solar -50%, China Sunergy -56%.

The reason why the sector continues to collapse like a falling knife is that it has not proven how they can make any money unless there is dreamtime-like expansion.

We tend to believe that tariffs that support volume growth but cut prices more rapidly will benefit the industry (and equities) as a whole more, but hurt higher cost participants sooner. It is wrong. Because the sector starts from overcapacity and excessive cost and even with costs falling 39%, and subsidies that guarantee on average €180/MWh they still lose money.

Developers in regional markets in some cases would prefer capacity caps with higher tariffs, thus enjoying the spoils of overcapacity-driven solar ASP (average selling price) pressures from their suppliers. The Asian manufacturers have zero discipline in capex or growth, they need only a 3-month price signal and they further expand, which virtuously keeps driving down the cost. Something like 10GW of new manufacturing capacity (40%) is coming online during 2011, while demand (global) is expected to rise about 15% at best.

The big ‘if’ is if Italy imposes an annual 2-GW/yr cap on installations; if they do, most of the marginal players in Asia will have nowhere to put their last 20% of production and we have a rapid fall in prices, margins and profits which then will lead to the proverbial ‘boom/bust’. But before then, we would expect margins to compress by 50% or more in some cases in the food chain, as we saw in wind–could see stocks fall 20-40% over the summer.

In the first quarter of 2011, the average selling price (ASP) of solar modules fell again like a rock. ASPs fell c45% globally while costs fell a slower ~37% pace. So in essence, prices fall more than costs and, as overcapacity grows, the downward trend is exacerbated by working capital requirements. A race to zero? probably, unless capacity retirements really start and companies streamline their debt. But capacity cannot be slashed when the main competitors in all parts of the chain, Chinese in particular, but Germans too, have a capital allocation policy based on growth at any cost.

At the heart of this we have an over-leveraged industry: 80-85% at project level is already unsustainable, but the companies are leveraged also at the holding level, making total gearing to the tune of 5-6x Net Debt to EBITDA. Overcapacity in all parts of the value chain, from wafers to poly-sylicon and development stands at more than 50-60% on average, and competitors (not just Chinese, Germans too) show low capital discipline and imperialistic market share aspirations. So at the minimum price signal (a tariff announcement, a government renewable plan confirmation), capacity grows way above demand. And despite the fall in costs, it is astonishing to see the companies unable to get their head above water. Working capital requirements eat any equity IRRs and debt obliterates the profitability. Add to this overcapacity and no wonder you ave seen 40-50% falls in stock prices in solar.

The Asian build more and more capacity, however some part of the production chain are much easier (from a technology and timing stand point) and cheaper to add than others. To simplify, the lower in the value, the easier/cheaper it is to add capacity. As a result, the value chain today would look like an inverse pyramid with more capacity downstream than upstream:

From upstream to downstream the value chain is:
– Polysilicon
– Wafer
– Cell
– Module

As cell capacity grew larger than wafer, demand for wafer was tight and wafer ASP shot up, squeezing cell margins. Then with this positive price signal at the wafer level, Asians have added wafer capacity. As a results, there were more wafer capacity than polysilicon available. Wafer guys margin got squeezed and polysilicon guys reaped all the profit. In Q1 11, the CAPEX for polysilicon for Asian companies could be recouped within one year as spot price for polysilicon was so high (gross margin >50%). Now overcapacity looms, gross margin collapsed and we are at the tipping point where polysilicon companies still need to lower their margins otherwise the whole industry will come to a halt. Presently, wafer and cells producers are barely earning a gross profit.

If you wanted to be cynical, you could say that the Germans and Spaniards actually tricked the Chinese by sending positive price signals for a few years, enticing the Asian the build, build and build, and now that there is massive overcapacity, cost of PV is likely to be close to grid parity. But companies are in dire straits and making poor returns, so any cut in tariffs obliterates them.

As the ability of governments to keep those supernormal subsidies dies (85% of subsidies for solar are in Europe, mostly Germany), the industry is condemned to a massive re-structuring.

Solar returns are collapsing DUE to the big subsidies. Subsidies created this industry and are now part of its demise. They created artificial signals for demand and then ultimately supply. Now, supply is in trouble due to overbuilding/expansions. Is it temporary? Maybe, and if “temporary” means 5 years it will be death for many, but margin compression is not.

Solar energy is not a problem as a concept. Greed fuelled by government-led price signals, that fade as quickly as they come, added to unsustainable debt and undisciplined capital allocation is the problem.

1 thought on “The Debacle of Solar and ‘Tariff Support’ Models”