It’s the big news of the week. “The IEA believes that the US will overtake Saudi Arabia in oil output” by 2030.

First, the IEA definition of crude oil is “crude oil including lease condensate”. Does this matter?. To some, yes. Not to me. Differentiating condensate and natural gas liquids from crude reminds me of the debate of oil sands versus API 35 oil. Whatever goes into your tank and makes the car run, baby. EROEI?. Sure, still very strong as shown in my post here (read). My biggest issue is to think EROEI is static and will not improve, when shale gas has gone from 3 to 1 to 6 to 1 in many areas.

Are these predictions subject to change? Of course. The oil market is one of the biggest self-adjusting markets and price, demand, and investment-supply response from OPEC and conventional supply will matter.
First, because production will be a function of price and demand. However, Deutsche Bank and others note that producers are pro-cyclical and are likely to press ahead with growth as long as average returns are acceptable from the blended prices, the same way we saw with shale gas production while prices fell from $6/mmcf to $2/mmcf-.
Second, because clarity about pipelines and transport is needed and we will likely have a full picture by 2015. To have Keystone or an alternative is an important factor to drive supply growth.

Third, regulation and politics. The most important is the restriction on the export of crude from the US by law. US concern about “energy security,” will likely keep the restriction in place for a while. The Jones Act, which mandates that any intra-US shipping by water be done using vessels under US flag, built in the US, and manned primarily by US crews also increases the costs of shipping within the US. 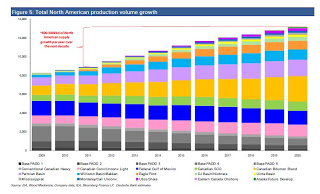 This analysis from Deutsche Bank shows that “the forecast, which we consider a base case with more upside over the medium-term than downside (in fact, given the Canadian oil sands project queue and the tendency for unconventional plays to surprise, we think there could be considerable upside, though we think it is important to understand the limitations of dynamic prices and infrastructure, which keeps our estimates relatively modest compared to a few recent bombastic predictions), suggests that North American production will add, on average, 400-500kbd of oil production growth per year over the next decade, with annual peaks as high as 650kbd.” 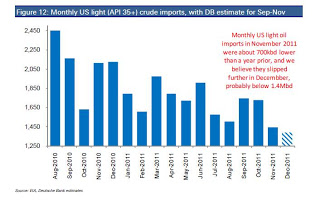 “Most of the major US unconventional plays have average economic break-evens below $70/bbl, and average breakevens in the Eagle Ford liquid windows appear to be $60/bbl or below. In the Bakken we think the average is around $65/bbl.”

I mentioned here in my post “shale oil, 600 years of abundant energy supply” that the United States accounts for 72% of the world’s Shale Oil reserves. With an organic-mineral ratio of 1.5 to 5, similar to crude oil and about three times higher than coal, the challenge is to continue to explore and determine the commercial potential and the average lifting cost, estimated at c$10-15/barrel. Now, it’s a reality. 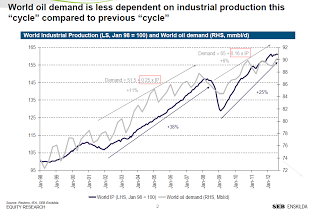 The United States has over 24 billion barrels of recoverable oil in shale, abundant oil supply delivered thanks to hydraulic fracking, a tried, tested and proven extraction technology. Companies like EOG, Anadarko and Marathon are already developing shale oil fast. Other countries could benefit from this revolution, particularly in Latin America. First things first and let’s start with the U.S.

The other leg of energy independence is oil demand decline due to efficiency. This chart explains a lot: