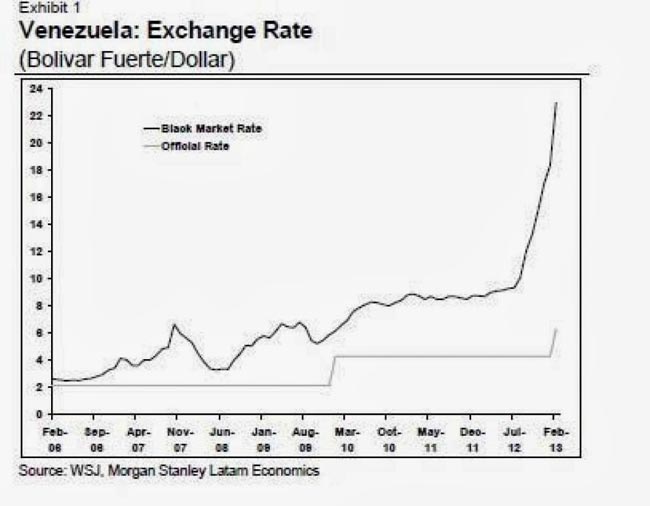 In just two months, Venezuela has recorded more than two thousand homicides. Paramilitaries and the National Guard have caused 21 deaths. The level of repression has reached unprecedented heights generating daily headlines around the world.

The problem with Venezuela is one of massive waste and squandering of the extraordinary revenues generated by oil.  Milton Friedman said that “if we let the government in charge of the desert, we would run out of sand in a few years.” The track record of the Chavez regime closely resembles that remark. Venezuela has missed the opportunity generated by its natural resources and created a cronyist subsidized system instead of a modern developed economy .

Today, Venezuela, the fifth largest oil exporter and largest proven heavy oil reserves in the world, has a 56% inflation and shortages of food and commodities caused by an irresponsible economic policy.

The “revolutionary” policy of devaluing, massive spending and indebtedness has led to an untenable situation of scarcity, impoverishment and repression. 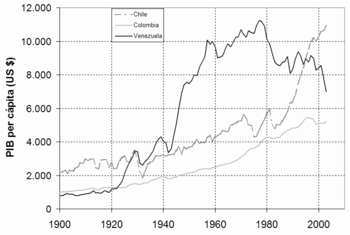 In fact, despite having seen oil prices multiply by more than 6 times, since the arrival of Chavez the debt of Venezuela and PDVSA , the national oil company, has increased by more than a $110 billion. PDVSA’s debt was $7.1bn in 1998. It skyrocketed to $43.3bn in 2013 despite a sixfold increase in oil prices.PDVSA’s case is worth analysing. From being one of the most advanced and efficient sector companies, it has gone to massively increase its workforce (from 40k to 121k) while reducing its production by 16% since the arrival of Chavez, and seen its debt balloon. Despite having enjoyed oil prices in continued upward trajectory since the regime came to power, Venezuela has the unenviable record of having sunk the productivity per employee of PDVSA to levels not seen by the sector since 1940 and has destroyed its financial structure with a debt has soared -by 8.4% in 2013 alone- to fund social projects that surprise the casual analyst due to the amounts spent. The inefficiency in spending can be seen clearly in the poorly built “social neighbourhoods” of the outskirts of Caracas. 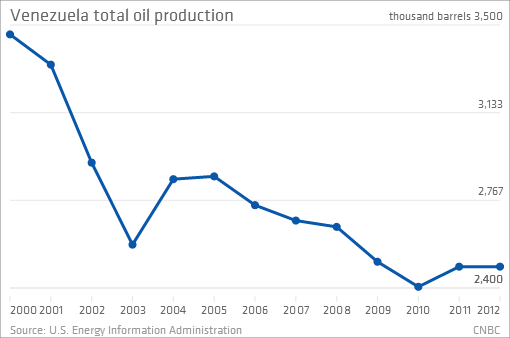 When analysing the supposed ‘achievements’ of the Chavez-Maduro regime that many politicians comment, one must always remember that the country has benefited from oil prices that have risen from $18 per barrel to $108. These extraordinary revenues have been squandered in huge subsidies, political donations and grants to friendly countries. This has not helped to change the economic model, or to modernize and develop indigenous industries, but to rely even more on oil prices, making Venezuela, along with Iran, the countries that need the highest oil prices to balance their budgets (over $100 a barrel). Far from becoming less dependent on oil, as the government promised, Venezuela is now almost exclusively dependent on its revenues (of every $100 received in the country, $94 come from oil exports), as other industries decline or report losses due to massive intervention.Excluding the impact of inflation, which in Venezuela reaches double-digit rates, real growth in Peru , Chile and Brazil in the last fourteen years has been more than three times that of Venezuela and only in recent months, with the wild Maduro devaluation, GDP per capita has plummeted from $13,000 to $9,000, back to early 2000s level.

The improved indicators of wealth in Venezuela pale when you consider the huge extraordinary oil revenues received in the last fourteen years. More than $380 billion dollars of income “revolutionarily distributed”, yet the percentage of the population living in poverty remains above 29% (officials say poverty has fallen to 24%). In fact, considering scarcity is 30% and inflation higher than 50%, poverty ratios are unsurprisingly easily manipulated.

Anyone who really believes that poverty has fallen by 5% in a year of 30% scarcity, massive devaluations and +50% inflation is simply gullible.

The Index of Poverty in Latin America Ethos Foundation placed Venezuela among the three poorest countries, while the most open economies-Chile, Mexico and Colombia-were in positions of less poverty.

I explain it in my book “Viaje a la Libertad Economica” (“Journey to Economic Freedom”). The Chavez regime model weakens its own institutions and public policies are perversely restricted to the personal decision of the leader who signs the cheques. This creates what is called “Boliburgueses”, a privileged class close to power, very similar to the oligarchs.

For Venezuela, oil has been a blessing and a curse. The huge oil revenues received have masked the more than disappointing results of the policy of “revolutionary redistribution”. Unfortunately, this process has been carried out with the voluntary surrender of the freedom of many citizens in exchange for handouts, only to discover today its darker side. Repression.

Betting on a repressive state in return for an alleged prosperity leads to no prosperity and the inability to end the redistributive dream that became a bloody nightmare. Critics of the opposition seem to conveniently forget that the institutions have been taken and controlled by the regime in a slow but relentless process for more than a decade. However, I remain confident that all will enable each other to seek a peaceful solution.

The way out of this hell of inflation and shortages after years of wasteful subsidies will not come with the same formula. Venezuela is a beautiful country with a capable, brave and enterprising population. Whoever leads the country in the future, I hope will learn that the policy of devaluing, inflating and public spending is bad news today and worse tomorrow. # SOSVenezuela .

1 thought on “Venezuela and the Nightmare of the Petrostate”