Copper  has collapsed -12% so far this year and is trading below 2011 lows. Copper is a risk indicator of the weakening Chinese economy and the slowdown in global industrial production.

– Much of the low-quality loans in China use copper as collateral, up to 30% according to HSBC, as it is an indicator of industrial activity and closely linked to Chinese growth. When the market begins to question the debt repayment capacity of many Chinese companies in difficulties, margin calls are triggered and copper falls with it.

– It’s the most common commodity linked to industrial production. Copper price is a good indicator of the global economy as fluctuations in price are determined by industrial demand.  Given that Chinese demand represents approximately 39% of global copper demand, the slowdown  of its  economy  has a big impact on the price.

It’s a double impact: Financial and demand-led. What was supposed to be a good hedge is actually a double risk on the economic slowdown.

In 2011, Chile accounted for 34% of the world’s copper production, approximately 19% of the revenues for the country. USA is the fourth largest copper producer in the world, after Chile, Peru and China, and Australia is fifth. All these countries aim to increase production and produce more. When prices fall producers seek to increase production to maintain revenues, a typical -and misguided- attitude of pro cyclical commodity producers.

Demand down, supply up and a financial hedge gone wrong… Domino effect. 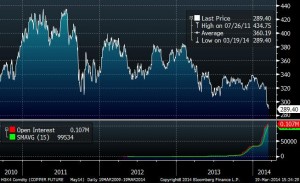 1 thought on “Why is Copper collapsing?”